What is holding up South African citrus outside China?

A reefer vessel called the Baltic Spring left Durban on 26 April with 1,800 pallets of South African grapefruit. The vessel discharged some of that in Japan, leaving Sakai on 26 May and proceeding towards Shanghai, there scheduled to offload on 31 May. More than three weeks on, and the Baltic Spring is still at anchor outside Shanghai Harbour.

The South African representative of the operator of the Baltic Spring, Stockholm-based Cool Carriers, has confirmed that by the start of this week the vessel was still in the same position outside the port of Shanghai where it has been for over three weeks. There is no further comment; the matter is the subject of high-level negotiations between South African and Chinese authorities, FreshPlaza is told.

Arrangements are reportedly underway for the Baltic Spring to either berth in Shanghai or Tianjin, north of Shanghai, but FreshPlaza has been unable to confirm this.

The reasons behind the delay remain opaque. The Citrus Growers’ Association states that it cannot comment on the matter at the present moment. Fruit South Africa says it has no further information. The Fresh Produce Exporters' Forum referred FreshPlaza to the shipping agent. 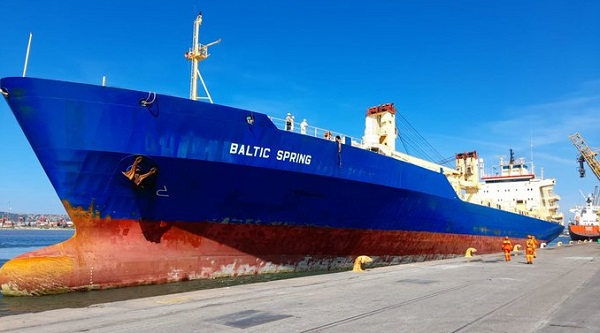 The Baltic Spring in Durban in April (photo: Twitter)


Quality of fruit not yet concerning
South Africa is currently the only exporter of grapefruit worldwide.

Fortunately, grapefruit has a shelf life of around twelve weeks, so the fruit quality is not of particular concern at this stage; rather, it is the reaction of the Chinese market to the arrival of large amounts of grapefruit at the same time. The Chinese grapefruit market seems to have emptied somewhat during this delay in the discharge of the Baltic Spring’s cargo.

The recent problems with the handling capacity of ports in southern China are creating additional insecurity amongst importers.

It took some years to finalise the protocol for citrus carried by specialized reefer vessels to China (most citrus arrive in containers), and in 2019 the first reefer vessel co-loaded South African grapefruit for Japan and China.

This service has been running for two years with the same vessels visiting the same terminal, with no problems, according to industry sources.

Within the citrus industry there is much speculation as to the reason for this delay, and explanations ranging from Covid regulations to international realpolitik are suggested.

South Africa has the Beta variant of Covid, and a high infection rate currently, which might explain the delay. The application for the Sinovac vaccine is at an advanced stage with the South African Health Products Regulatory Authority. There has not yet been a formal application for Sinopharm, although a local company has indicated it would.

South Africa enjoys good bilateral relations with China, and the recent centenary of the Communist Party of China hosted by the Embassy of China in South Africa was attended by top African National Congress officials in a convivial atmosphere.