The prices for bananas from the Canary Islands and other origins remain low in Spain due to an on-going war between different supermarket chains. This is also giving sales a boost and keeping banana consumption at higher levels than that of other fruits in a year without oversupply.

"In Spain, bananas are the most sold fruit year-round and consumption is generally very high," says José María Ruiz, founder of Plátanos Ruiz, a ripening company specialised in bananas for over 50 years which also has its own stand in Mercabarna, Barcelona's wholesale market. "The great advantage of bananas is that their price remains reasonably affordable all year round. In Mercabarna, it is currently marketed for lower prices than summer fruit."

Both factors, both consumption and price, are linked to the stable supply in the Spanish market, the main destination for Canary bananas, which share the shelves with the bananas from third countries. "At times when there is some scarcity of Canary bananas, as in the months of October and November, the supply of other bananas rises, peaking in the last trimester of the year," says José María. "Currently, Catalonia is receiving about 9,000 tons of bananas from the Canary Islands every week, which represents 50% of the fruit's total supply in this region. With those figures, in other years about 1,000 tons would have to be taken off the market, but now everything is sold, and at an acceptable price!"

Price war between Spanish supermarkets
The increase in sales has a lot to do with what is going on in the retail. Supermarket chains have been one of the biggest beneficiaries since the start of the pandemic and the big players are currently embroiled in a war to maintain their quotas and level of growth in Spain, says José María Ruiz. 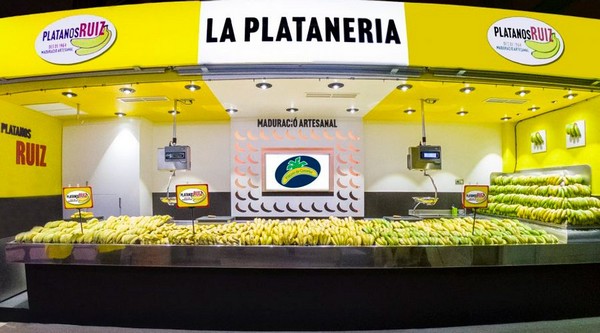 "Normally, the big chains look at the previous year's results to assess their growth and sales rating, but this year this hasn't been possible because 2020 was very unusual. In April, for instance, basically everyone was locked up at home and there was little else to do but consume food. The situation has put pressure on the chains' purchasing managers to keep prices low and not give up market share," he says.

"Aldi is expanding heavily in Spain. Lidl doesn't want to be left behind and Mercadona doesn't want to lose ground either, so a price war has developed between the chains, and the whole landscape is changing."

And this is reflected in the retail price of bananas, which, according to José María, has fallen below 2 Euro per kilo this year, while last year the price often reached 3 Euro per kilo. This lower price level has given a boost to overall sales. Banana prices usually always increase in January, but that hasn't happened this year. "In the end, however, only the consumers actually benefit from this war," says José María.

Shortage of containers
The logistics is an extremely important factor for Canary products, but the connection between this outermost region and the Spanish mainland has also been affected by the pandemic, reports the founder of Plátanos Ruiz.

"No bananas have been left on the docks, but there have been problems," he says. "After all, we are talking about islands where there were suddenly no tourists. That means there was hardly any demand for products from the mainland. But the banana harvest continued, of course, and the shipping companies then had to send empty containers to the Canary Islands to meet the demand for transport for this fruit. The result, of course, was a sharp increase in freight costs, although this was not reflected in the fruit's final price."

"Mercabarna has changed a lot since the pandemic started"
Plátanos Ruiz has an 800 m² warehouse in Mercabarna, the most important wholesale fresh food market in Europe in terms of sales volume. There, the company ripens about 8,000 tons of bananas from the Canary Islands and other origins, including organic ones. Plátanos Ruiz also has two stands in the wholesale market, allowing it to serve retailers and greengrocers directly.

"Mercabarna has changed a lot since the pandemic started. Direct sales have been largely lost; everything is done now mostly by phone. Also, 30% of direct sales were to hospitality customers, and although hotels and restaurants are allowed to open again, that sector is still not running at all like it used to," says José María.

Nevertheless, this obstacle is in no way affecting the prospects of the banana company, which has been able to achieve positive results in recent years. "In four years, we have grown by 25%," says the founder. "That's a significant increase, which we've been able to achieve by spreading our activities, which include ripening bananas for third parties. We offer our ripening service at Mercabarna to supermarkets that buy the fruit themselves in the Canary Islands and with whom we have an exclusive partnership." This growth is also reflected in the company's figures.

"Based on Mercabarna's sales statistics, our company accounts for about 6% of what is sold on the wholesale market. For Canary bananas, we account for 10-11% of total sales in Catalonia and about 1% in all of Spain."