Belgian Coop Federation had record year in 2020, despite COVID-19 pandemic

To say 2020 was an exceptional year is an understatement. That's what the Belgian Horticultural Cooperatives Federation (VBT) says in its annual report. Despite the unusual circumstances, the producer organizations in this federation could withstand tough challenges. Those were due to the highly volatile market conditions.

VBT had €1,078 million income (9% up from 2019). So, the federation and its members certainly had a record year. In seven years, the cooperatives' turnover has increased by more than 25%. In addition, the frozen vegetable producers cooperative realized a €103 million turnover (+3%). 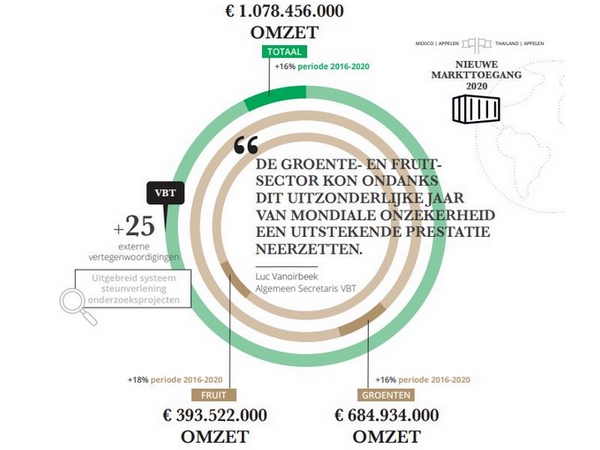 Supply
In 2020, the producer organizations' supply remained about the same (-0,7%). That's compared to 2019's historic large supply. Concerning product volume, 2020 was a rather normal year. There was an average amount of vegetables. Tomato supplies did rise by 15%, or 38 million kg. In fruit volumes, apple quantities fell noticeably (-30% or -45 million kg). That's because apple production and harvesting were severely affected by night frost late in the season. Strawberry supplies also decreased (-6%) last year. 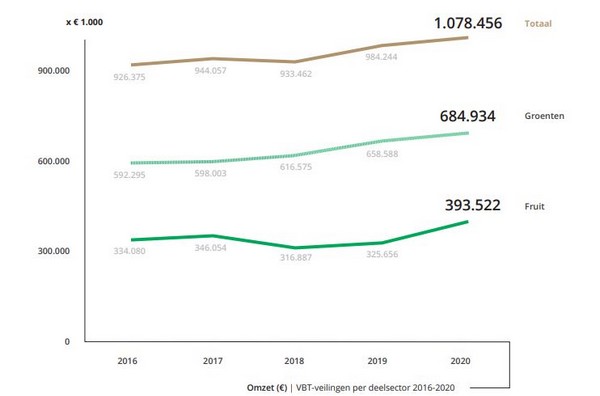 Fruit and vegetable sales totaled €1,078 million (+9%). They, therefore, topped the magic €1-billion mark. Vegetables' share in the turnover was €685 million (63.5%), and fruit's was €394 million (36.5%). The front runner among vegetables was chicory. This product performed well in 2020, with a 22% increase in turnover. Zucchini sales rose by 15%. But leeks and loose tomatoes had a harder time of it. Leek sales decreased by 16% and those of loose tomatoes by 14%. For other vegetables, VBT saw an increasing turnover compared to 2019.

The fruit sector had a generally positive 2020 when considered in the correct context. The past few years have been extremely difficult for this sector. That's due to both weather conditions and high productions in several European countries. In 2020, the sector made up for this. That's thanks to an increase in turnover for apples (+11%), strawberries (+23%), and pears (+34%).

Export
Exports are imperative for the economic sustainability of Belgium's - and particularly Flanders' - cooperative organized fruit and vegetable sector. "Exports to other European Union members states is a tradition. However, it remains a challenge to access third-country markets. So we'll keep paying attention to this," writes the VBT.

In April 2020, Thailand officially announced that Belgian apples had effectively gained access to that country. That proves that the VCT's team's effort and its financial input have borne fruit. As of October 2020, there's also market access for Belgian apples in Mexico.

Click here for the complete annual report (in Dutch).