“The reason I started Linernet was that while I was working at a number of shipping lines, I noticed that often the information that I was looking for, wasn't readily available,” says Lance Pullan, Linernet's managing director (and self-declared ship nerd). “I saw that others in the fruit industry were also searching for information like the volumes of cargo moving out of the various ports on the various trades or the market shares of various shipping lines on the South African trade.“

Linernet collates information obtained from various sources, primarily Transnet Port Terminals, and translates it into a meaningful format to understand the operational status quo at a glance. “The key thing is giving visibility of all the ports at once, which we provide in our daily port update for each of South Africa's ports.” 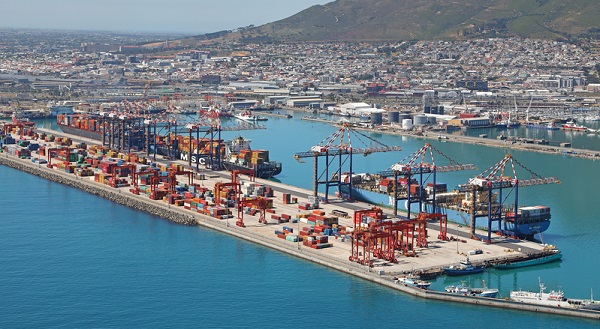 Fruit South Africa has been sharing Linernet's daily port updates with the fruit industry since December 2020. Initially the focus was just on the Port of Cape Town to support the deciduous fruit season, but this has been expanded to include all South African ports in preparation for the citrus season, he says.

In addition to providing daily port updates, Linernet also provides deeper insight into specific market drivers. “A customer might contact us and ask why they're having problems getting space to Asia, or it could be a new exporter wanting to get an idea of the available shipping services, their average vessel size and frequency. Sometimes we are contacted by experienced exporters who just want to sharpen their skills and knowledge, since shipping is so technical and dynamic.”

Linernet is able to show its clients (shipping lines, exporters and importers, terminal, warehouse and coldstore operators) how full vessels are when leaving South Africa, filtered for the different services. “Our clients typically have assets which they wish to optimize.”

Daily port updates
In the daily report Linernet also generates a seven-day berthing plan from satellite tracking data as well as an overview of the main service rotations and a timeline for the upcoming stack opening for the various trade routes.

“A fundamental point that we're trying to determine is the number of days that a vessel has spent at port,” he says. “We were specifically asked by the Citrus Growers' Association to include it. We measure when a vessel was supposed to arrive and when it was supposed to leave.”

Another vital point would be an accurate idea of the number of containers in South Africa, available and at depots, at any given point in time, but that's easier said than done: Lance likens the movement of containers to a bucket with multiple holes being filled up at differing rates. Containers taken by road to neighbouring countries further complicate the calculation.

In a recent newsletter the CEO of the Citrus Growers Association notes that the citrus industry will probably need 95,000 reefer containers in the coming season, and a total of 120,000 reefers if apples, pears and avocados are also considered.

“The interesting thing about data is that you get operational data, looking at things as they happen, like a snapshot in time. Looking at a number of snapshots gives you historical data and that is where the real value of the data comes in.”

“We should be making more use of non-operating reefer containers”
At any given time approximately 40% of containers going through South Africa's terminals are empties, Lance says, and shipping lines have been prioritising shipping empties rather than full containers due to global container shortages. The weight of four or five empties can be loaded for one full.

“All of South Africa's terminals are reaching their maximum installed capacity so there's little room for growth in the short term. We have to start getting smart: this is where if you're a reefer exporter you're going to have to partner with an importer that can put their dry cargo into a non-operating reefer container. As a country we should be making more use of non-operating reefer containers.”

He continues: “To reefer exporters, the biggest piece of advice I could give them is to start finding out about the flows of empty containers, which is what we do for the Citrus Growers' Association and Fruit South Africa. Asia is now a very big importer of reefer cargo and they have to send them back at some point – full or empty.” 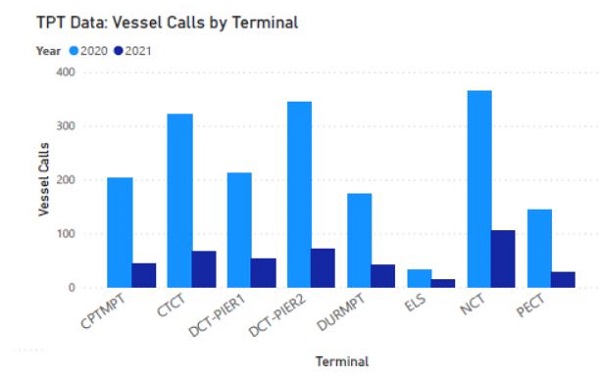 Linernet comparison of vessel calls by terminal over two years

“If we look at what happened in the Suez with the Ever Given, global trade chokepoints will increasingly be under pressure and shipping lines will want to diversify risk accordingly. This presents opportunities for South African ports.”

The port of Ngqura has progressively taken over the transshipment role from the port of Durban; given its deeper draft and less gateway (import / export) cargo taking up capacity. Ngqura is also closer to the main shipping lanes around the Cape of Hope and between South America and Asia, Lance remarks.

“Attracting cargo and shipping lines, however, requires strong operational performance and longer-term planning. This is where accurate and consistent data will provide a competitive advantage.”