With Mexican production of organic asparagus coming on significantly, there’s likely to be pricing pressure in the marketplace.

Meanwhile California should come on as well this week with supplies out of Gonzales. All of this means there looks to be more consistent supplies overall of asparagus. “A decent percentage of asparagus in California is being pulled out of the ground because of the pricing structure. Mexico has the capacity to produce more and as organics get more sophisticated year after year, it allows for more product to be available,” says Abendroth. At the same time, the vegetable is also considered a more elegant item often featured on the menus of restaurants, particularly higher end ones, many of which are still shut down or in the process of reopening. 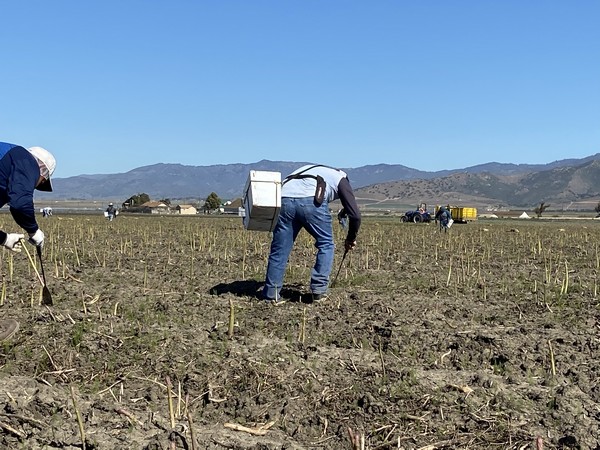 Price coming down
On demand, it may be spurred on by increasing promotions that become available to move those greater volumes. “When there was limited supply, demand was pretty good. It was $40s FOBs. But now supply is going to be good and the price is going to come to match it,” says Abendroth. “There’s always a catch up as price starts to fall and retailers start selling through expensive inventories and have access to less expensive inventories. So, you can see it drop $15 in a week on the FOB side.” Asparagus is also considered a springtime crop which also appeals to consumers.

As for pricing, the Mexican FOB asparagus price will likely affect the domestic FOB asparagus price. “Mexico has a lot of import boxes on the marketplace. Then California comes in and we’re asking for more money on those boxes—that’s around labor and minimum wage going up. It’s reflecting the true cost of domestic agriculture,” says Abendroth. “I think there will be fairly aggressive FOBs regardless of what country it comes from. Those Mexican FOBs will definitely affect the first six weeks and I see the potential of them being in the mid to low $20s.”

Overall, what Abendroth doesn’t see is overwhelming support of keeping California growers in the game. “If asparagus is $24 out of Mexico and you have a bunch of it and you’re in California and you still need to move your boxes, chances are they’re going to sell closer to $24 than $32,” says Abendroth.