Increases for US and South Africa, decreases for Argentina and Turkey, demand rises

US oranges and South African mandarins have seen harvest increases compared to the previous season of 1% and 8% respectively. Argentinian and Turkish oranges, on the other hand, both saw declines in the harvest of 10%. Demand has been increasing as more customers, especially in Europe and North America, are purchasing products high in Vitamin C. However, due to logistical difficulties, it is currently uncertain whether this will lead to a substantial export increase.

The Season for Oranges in Argentina
Argentinian oranges are typically harvested from April to November, starting with the Navelina variety. The next in line is the most popular Washington Navel harvested from May to June, and the Salustiana variety, for which the harvest lasts from May to July.

Harvest Estimates for 2019/2020
The yield for this season is expected to be at 720K metric tons, a decrease in expected harvest from 800K metric tons in 2018/2019. The biggest potential factor for the decrease is reduced investments in tree management from expectations of a lower harvest as last year also saw a decline in mandarin production of 280K tons.

Export Trends in Recent Years
The main buyers of Argentinian oranges are the European Union, especially Spain, which acts as the gateway for exports into Europe. There is also a high demand for Argentinian oranges from Russia and Latin American markets such as Paraguay. It is interesting to note how Spain takes up almost 66% of Argentina’s total exports with other European countries following abysmally lower numbers. This is as while Spain and the Netherlands both act as the key ports in accepting produce from outside of Europe, there is a tradition of bilateral trade relations between Spain and Argentina.

Export / Price Outlook for 2020
The forecast for the export volume of 2019/2020 was at 72K metric tons in January. This is a slight decrease from 77K metric tons of exports in 2018/2019. However, European orange demand had already been rising before COVID-19 as its production declined by 10% to 5.8 million metric tons due to unfit weather conditions. Thus exports for this season are expected to see a significant positive boost as the demand for Vitamin C products is rising.

In line with this demand trend, the wholesale price of Argentinian oranges increased dramatically in mid-March by approximately 18% and then by almost 22% the next week, and to an unforeseen 54% in late March until stabilizing in early April with an average increase of 4.7%. 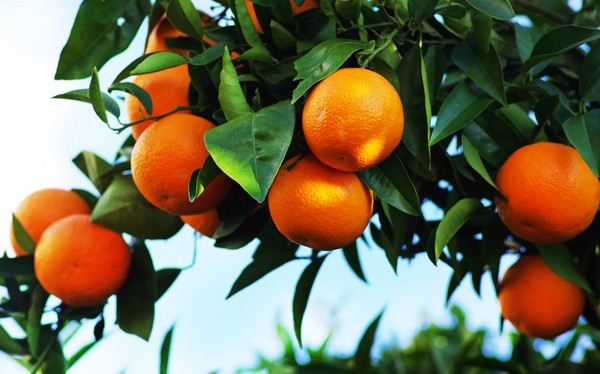 The Season of Fresh Oranges in the US
April is the middle of the key harvest season for fresh oranges in the United States. Right now, Navel oranges -the largest of all orange varieties- are heading to the end of the harvest season which lasts from November to May. Three main producing regions have different harvest periods: California, where the season starts from December and lasts until August, and Texas and Florida which start harvesting from November to June.

Production Forecast in 2020
U.S. production in 2020 is forecast to rise by 1% to 4.9 million tons. Orange production in Florida has been declining for years due to citrus greening, which has decimated groves and increased costs for crop maintenance. Domestic consumption, exports, and fruit for processing are all expected to be up with the production increase.

Export Trends in Recent Years
In the 2019/20 crop year, the US exports are expected to reach 485K tons for which the majority goes to Canada and Asian markets, followed by South Korea, Hong Kong, Japan, and China. South Korea is already a saturated market as imports from the US occupy more than 93% of the total import volume. In China, US oranges compete with Egyptian and Spanish oranges within a similar marketing period.

There are a few reasons for the expansion in US oranges to East Asian markets including:

Orange consumption in Korea has been gradually decreasing from 2018, as diversification in imported fruits progresses and local premium citrus in Korea are gaining popularity. Orange exports to China are expected to be robust due to the rising demand for counter-seasonal fruits, as well as premium high-quality fruits, by middle-class Chinese consumers. In recent years, the demand for red flesh Cara Cara variety has been on the rise for its unique taste and appearance. In wholesale markets, both domestically produced and imported Cara Cara oranges are widely available.

The suppliers in the US received large increases in orders through the first part of March, but the demand is falling in the second half as retailers had excess stock at this moment.

The Season for Oranges in Turkey
The harvest season for Turkish oranges is separated by two main varieties: November-February for the Washington Navel and March-May for Valencia. Washington Navels are larger and consumed as a whole, while Valencias are typically processed into byproducts such as orange juice.

Harvest Estimates for 2019/2020
In the 2019/2020 season, orange production is expected to dip slightly by 10%, compared to last year, due to poor weather conditions. The expected volume in Finike within the Antalya region is approximately 200K metric tons, accounting for 60% of the total Valencia orange production,

Export Trends in Recent Years
Russia has been always on the lead for the Turkish orange demand followed by European countries, including Germany and Poland. In 2019, Turkey exported 73.2K tons to Russia and 85.6K tons to Iraq. Export volume in 2020 has been largely affected by the coronavirus, as more consumers are looking for products high in Vitamin C. Turkey’s citrus exports have increased from 399K tons in January-February last year to 442K tons during the same period this year.

Exporters are also eyeing the Asian and Scandinavian markets, in which China has been steadily increasing consumption for the past few years, with an increase in imports by 3% from 2018/2019, and is expected to grow even further with the COVID-19 outbreak. In 2018/2019, domestic consumption in China recorded 6.98 million metric tons, placing itself as the world’s top consumer of fresh oranges. The Scandinavian market has also indicated growth in imports over the past few years, with increasing consumption in countries such as Norway.

Market Prices in the 2020 Season
Valencia oranges have kept a relatively stable price trend, which as of April 13, recorded USD 0.33 per kg, similar to the prices last year. This trend is similar to the Washington Navel variety, at USD 0.41 per kg on April 13. As panic-buying ensued, suppliers put more oranges into the market to meet the high demand, resulting in oversupply, thus keeping prices stable.

The Season for Mandarins in South Africa
In South Africa, soft citruses have been rising in popularity, with mandarins, in particular, the most widely planted. The most popular varieties are the Nardorcott, Nova, and Tango. The 2020 mandarin season is expected to run from March to August.

Export Trends in Recent Years
South Africa's main export market is in the United Kingdom, followed by the Netherlands and Russia, and exports in 2019 up to September recorded at 75K metric tons, 61.3K metric tons, and 23.2K metric tons respectively. Exports are expected to increase by 12%, from 295K metric tons from 2018/2019 to 330K metric tons. South Africa caters to the global market more than the domestic one, hence the increasing trend.

Export Outlook for the 2020 Season
The US is an important emerging market for South African mandarins, with an average export increase rate of 15% as consumers prefer easy peeler fruits. Exports to the US have recorded a volume of 18.4K in 2019 up to September. With the coronavirus outbreak, exports are expected to increase further, with US authorities even suggesting lifting port restrictions to allow citruses to be delivered to all US ports.

The European Union market, on the other hand, has proved to be difficult to export, as it has strict phytosanitary requirements towards citrus imports for the prevention of citrus black spots (CBS). These requirements prove to be costly, and South Africa has not deemed it a very profitable market. Exports to France and Germany have continuously remained under 4K metric tons. However, this could change with the boost in demand for citrus products in the EU from COVID-19. Import regulations in the EU have been loosened to allow fresh fruits to be circulated quickly. Logistical issues are being alleviated as there has been an increase in the workforce at ports, and citrus exports have been given priority in ports to ensure a stable market.

For the full market report by Tridge, including graphics, please click here.