The demand for kiwifruit, just like that of citrus fruits, has increased on the European market due to the coronavirus. At the moment, Italy and Greece dominate the European market. Italy has been particularly affected by the Greek competition, which could break records this year. Due to this formidable competitor, prices in the kiwifruit market have remained stable, despite the lower yields. The increased demand for kiwifruit could save the end of the season, now that Greece is out of the market. In North America, the California season has been extended due to the falling demand from schools and caterers. This is hindering the Chilean exports. However, April is the month when New Zealand comes back on the market. The first batches are currently at sea. 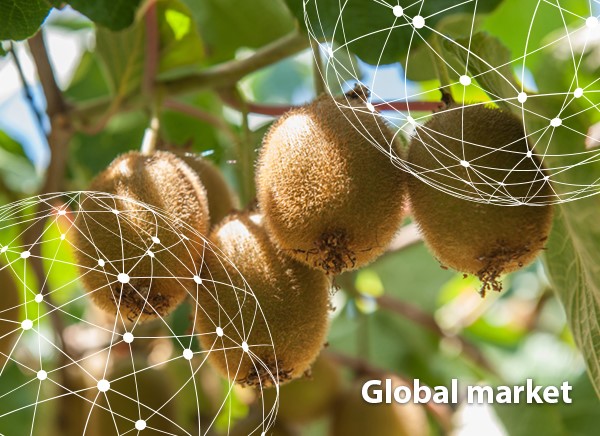 New Zealand: First kiwifruit shipment at sea
The first of the 47 shipments of kiwifruit expected this new season from Zespri has left the port of Tauranga and is bound for Japan. At the end of March, more than 1 million boxes of SunGold kiwifruit were shipped to the Tokyo and Kobe market, including 330,000 boxes of SunGold from Gisborne, one of the first regions to go into production in the country. Although there are challenges ahead for exporters, the ports in Japan, South Korea and Europe are still operational. Zespri expects to be able to sell around 155 million boxes (600,000 tons) of Premium Zespri kiwifruit on the global market. The latest estimates point to 80 million boxes of SunGold and 70 million boxes of green kiwifruit this year. Zespri expects to ship 18,500 containers on 47 ships; 4 to Europe, 11 to the Mediterranean and 32 to the Asian market.

Australia: Smaller volume on the market last season
The latest figures from Hort Innovation's Horticulture Statistics Handbook show that in the financial year that ended on June 2019, the production fell compared to the previous year. Volumes were 26% lower and stood at 7,134 tons, while the value fell by 28% to AUD 19 million (EUR 10.6 million). Exports decreased by 36% to 660 tons while imports (especially from New Zealand) increased.

The Netherlands: Kiwis are the best-selling fruit at Albert Heijn
The demand for fruit with a lot of Vitamin C is on the rise, and this includes kiwifruit. In fact, the largest Dutch retailer, Albert Heijn, reported that kiwis are suddenly the best-selling fruit at the supermarket. For years, bananas had been the undisputed leader. "This is probably due to their high vitamin C content," said CEO Marit Van Egmond. Good news for the New Zealand kiwifruit season which is about to start.

Belgium: First Sungold in week 17
Zespri expects to have volumes of green kiwis available up until week 19. The first Zespri SunGold kiwis will arrive out of Nieuw-Zealand in week 17. Zespri is seeing a positive market situation in the Benelux with the same sales volumes as last year. The pressure is high because of COVID-19 but the demand is steady. There is higher demand for pre-packed options due to hygiene concerns and this has caused some pressure in the packing facilities, especially in combinations with the preventive guidelines of social distancing in place.

Germany: Uncertainty before switch to southern hemisphere
Italian kiwifruit traditionally dominates the supply in the German wholesale market, as Germany is traditionally one of the largest importers of Italian kiwis. Other European origins, including Greece and France, hardly play a significant role. It is taking a while for the switch to the southern hemisphere to happen. This week, it was reported that the first New Zealand Zespri kiwis are on their way to Europe. Only in four weeks will it be possible to give a definite answer about the total volume that can be exported to Europe in the current coronavirus-marked times.

France: High demand for kiwifruit
Due to its reputation as a healthy product, kiwifruit has been doing very well recently on the French market. Unfortunately, the French season is almost over and the stocks left are small. The market will soon switch to imports.

Italy: Greece and the coronavirus: two hurdles for Italian kiwifruit
The 2019/2020 Italian kiwifruit season started with a lower yield, which led to hopes for better prices. But this was countered by Greece, which is improving every year in terms of quality while cutting production costs. COVID-19 also had its impact on the market, doing away with the hopes for better prices. In general, prices have therefore remained stable.

"The situation for kiwifruit changed completely in March compared to previous periods," said a major trader of Italian kiwis worldwide. “Both the domestic and the foreign demand have risen considerably. The Greek kiwifruit season is almost over and the Italian stocks stand below 80,000 tons (37% less than last season). I therefore expect a better and shorter end of the season, compared to the first 4 months of the campaign.” In early May, the first yellow kiwis are expected to arrive from Chile and that production is forecast to be in line with previous predictions when it comes to the quality and quantity. The harvest is currently underway in Chile.

"We started this season with 30% fewer Hayward green kiwis and with optimal quality," says a spokesperson for a national growers' cooperative. “The market should have responded positively to this, but we hadn't taken into account that the Greeks would remain so competitive until mid-February. This year, the size of Greek kiwifruit has been mainly medium-large, so Italian kiwifruit growers have obtained better prices for the smaller sizes. Now that Greece is out of the market, we are dealing with the consequences of the coronavirus, especially in terms of transport. We expect more competition in the market in the future. We are keeping an eye on Iran in particular.”

Spain: Season ended earlier; lack of small sizes for the retail
Kiwis are one of the most demanded products on the market at the moment. Sales have skyrocketed because the fruit is rich in vitamin C and has a long shelf life; two characteristics that consumers truly appreciate right now. The Spanish kiwifruit season is coming to an end earlier than usual, about 20 days before the first kiwis arrive from Chile. The yield has been 20% lower, with an abundance of large sizes. There has been a shortage of small sizes which the retail does demand for packaging in punnets. Because of this, retailers have packed larger sizes: 33 instead of the usual 42.

Greece: Record kiwifruit exports this season
Kiwifruit exports may be record-breaking this year. On March 20, the fruit's exports amounted to around 149,019 tons, compared to 111,210 tons last year. Not only has the volume of Greek kiwifruit increased this year, but also the value.

Chile: Longer season in California hinders exports
Different kiwifruit varieties are grown in Chile, such as the Hayward, Golden and green kiwifruit. The green kiwifruit season runs from March to June. A large volume of kiwis is expected in April. The fruit is exported worldwide. An important market is the US, but since the domestic season in California is lasting longer due to the drop in the demand caused by the coronavirus, less is going to this market. California's campaign is expected to finish around late April.

United States: Lower demand due to closure of schools and caterers
At the moment, the kiwifruit on the US market comes exclusively from California. "We import kiwis from New Zealand and Chile, but mostly for the summer months," says a trader. “Our suppliers tell us that given the European stocks, there may be some gaps in the market. We expect little impact from this due to the domestic supply.” The challenge in the US market lies mainly in the demand. The demand from the catering industry, schools and cruise ships has stalled due to the coronavirus. “There may also be delays and reductions in exports due to the current market situation,” says a trader.

The trader also expects the harvest in Chile to be 15% smaller than last season. European yields are also lower and the logistics has been slowed down by the coronavirus. Prices were expected to rise, but the drop in the demand is keeping the price stable. Next year, the harvest in California is expected to be 5-10% smaller. Two new varieties are being harvested before the fall in California: the yellow kiwifruit and the red kiwifruit, with hopes that these varieties can give a boost to the demand for the fruit.

China: Local kiwifruit on the market until May, then exports from New Zealand
The 2019-2020 kiwifruit season is coming to an end in China. The last local kiwis will be sold in May. The first early varieties will come back on the market in August. In the meantime, there will be a lot of supply from New Zealand. The new season from Zespri has just started and the first orders could be made in April. There is also supply from Chile.