The potato market in Europe is now clearly divided between north and south. In the countries where the Coronavirus / Covid-19 is around, the demand is rising, but especially for local products. For example, the demand in Italy has tripled for a short time at the start of the epidemic, and Spanish growers are barely able to keep up with the demand. In the Netherlands, Belgium and Germany, the market is quiet again, which means that prices are under pressure. Due to the recent rainfall, potatoes have yet to be planted in the Benelux. 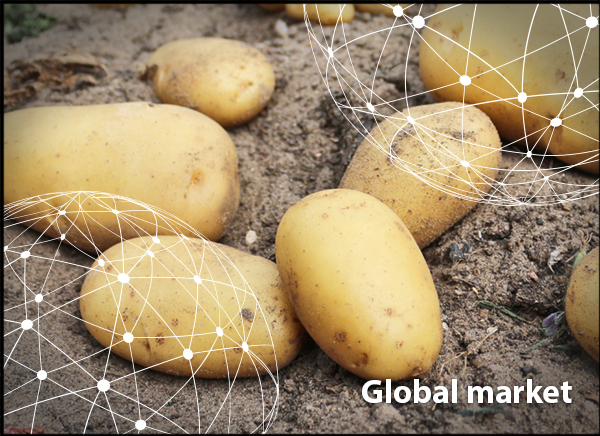 In the North American market, there is mainly uncertainty about the availability of potatoes for the market, while in Oceania the weather conditions have resulted in a lower yield per hectare. Potato prices in China are high due to the limited supply and the fact that trade has been hampered by the coronavirus.

Netherlands: Quiet potato exports; prices are under pressure
Dutch potato exports are currently quiet. "The countries we normally serve have a sufficient supply," says one exporter. "Every packer seems to be having a quiet time. Consumption has fallen and the coronavirus is not helping with that either. We have quite a few customers in the food service, catering and tourism sector and they are buying less because people are staying at home."

This will put prices under pressure. "You can buy Agria potatoes for 19/20 cents, and potatoes for fresh consumption are even cheaper than that, with prices as low as 15 cents being accepted. The demand is simply not there and everyone is getting a bit nervous," says the exporter.

"Imported potatoes are not putting any pressure on the market either. The first Egyptian ones are on the market, but the volumes are limited and those prices are also low. The wet conditions are not making things easy, in any case. Work often won't start until April, but people are already planting in Eastern Europe."

Belgium: Wet weather makes potato planting impossible
The potato market is quite calm at the moment. Prices are currently falling somewhat, as the demand seems to be falling. Due to the mild temperatures this winter, the demand lagged a bit. The quality of the potatoes is good, despite the dry summer. Due to the considerable amount of rain recorded in recent weeks, growers are not expected to be able to plant new potatoes for the time being. If it stays this wet, old potatoes may be needed for longer.

Germany: Start of the Egyptian season
The supply of domestic potatoes from storage is still keeping pace with the demand. Although sales are quiet, people are generally satisfied with the current market situation. In addition to the domestic potatoes from storage, the import season is also slowly starting. Italy, Cyprus, Israel and Egypt, among others, are the biggest suppliers at this time. "Until recently, Israel was the market leader; now Egypt has been able to achieve a good market position due to the good quality of its main variety: the Princess," says an importer. Although German potatoes from storage are being offered for longer and early potatoes are coming on the market earlier, the small premium potatoes from Egypt are particularly popular in March and April.

Austria: Good sales on the domestic market
Domestic sales in Austria have stabilized somewhat. Exports, on the other hand, are very quiet. The supply in storage is abundant. Due to the rising temperatures, the potatoes in non-refrigerated storage can no longer be kept for too long.

France: Strong difference between French regions
The potato season in France has different schedules, depending on the region. The volumes and quality have been good this year in Champagne, but other regions had to deal with late harvests, which took a toll on the quality. For some growers, this season will be longer than the previous one.

"At the start of the coronavirus epidemic in Italy, especially in the early days, when people feared quarantines, panic led many to stock up on supplies," said a trader in Northern Italy. “The demand from the retail tripled. The situation then normalized again. We are now back to the usual figures and have started our first exports to Switzerland.” Great efforts are being made to stop the virus, but for the companies it is business as usual. “We only feel the impact of the virus to a limited extent," says the trader. “We can simply order packaging and other items without any problems and we continue to load and unload potatoes. We will continue to work to prevent shortages in the supermarkets. We are even talking to buyers on Sundays, because potatoes are a versatile product and are in great demand. 90% of consumers only buy potatoes in the last days of the week.”

In Sicily, the harvest of new potatoes around Syracuse started a week ago and sales had a good start. "In the last two days, however, our work has been limited," says a grower. "The future doesn't look very bright at the moment, and a lot is unclear."

Spain: Demand for potatoes skyrockets
After two quiet months in January and February, the demand for potatoes in Spain increased following the detection of the coronavirus. According to one of the largest Spanish growers, it is almost impossible to meet all the demand.

So far, the potato season has been looking good in terms of prices. The average has risen from 28 to 35 cents per kilo at origin for the top qualities. Due to the good weather conditions and the mild temperatures, early potatoes from Murcia and Andalusia are expected earlier this year. Then it will be time for the harvest in the regions of Castile-La Mancha and Castile-León. At the moment, the potatoes on the Spanish market come from France (year-round supply), Egypt, Morocco and Algeria.

China: Higher prices due to small stocks and slow trade
At the moment, potato prices are high on the Chinese market. This is not only due to the coronavirus, which is making transport more difficult, therefore slowing down trade, but also because stocks are somewhat smaller this year. Therefore, a higher price is currently being paid for the new potatoes that are reaching the market. There are three areas in China where potatoes are produced. At the moment, the supply comes from southern China. In May, new supplies will come from the east.

Chinese potatoes are also exported, but trade is slowing down at the moment as a result of the coronavirus. Due to their high price, those potatoes are less attractive on the international market. In the coming months, the price will slowly fall again and exports are then expected to rise.

North America: Uncertainty about the availability of potatoes
Potato stocks in North America are tight, but it is unclear how tight. The supply has been limited since the beginning of the season. Frost in the spring of 2019 took a toll on the potatoes. The yields per hectare were significantly lower and the size of the potatoes was much smaller than normal. In October there was another frost in Idaho which affected 20-25% of the harvest and had a great impact on the supply.

At the moment, there is a lot of uncertainty about the availability of potatoes on the market and the quality of the potatoes in storage. This is having an impact on trade, as people in the sector also want to have products to sell by the end of the season. Uncertainty about the coronavirus is reinforcing that uncertainty. Given the volume of potatoes sold, there has been a switch in the retail in the last 30-90 days. Supermarkets only want to put potatoes on the shelves that will be quickly sold.

The supply of red potatoes is now small, but they have been on the market for longer than expected. New stocks of the yellow potatoes, which are the fastest-selling, are already available. The stock of white-fleshed potatoes will run out this month and make way for the first new harvest in North Florida. There is still a lot of uncertainty about the red-brown potatoes, although no shortages are expected until July. The price for the latter has risen by 15-20%.

Australia: Dry weather in Tasmania
In 2019, 50,005 tons of potatoes were exported, which is an increase of 10%, while the value of exports grew by 4%. However, growers in Tasmania are facing the driest potato planting period ever, while water management remains an ongoing problem. However, the potato planting is not being hindered.

New Zealand: Weather conditions lead to smaller yields this season.
The weather in New Zealand has so far been quite unusual this season and this is having an impact on potato yields. According to some experts, this is one of the most difficult periods in 10-15 years. The yields will be reduced mostly in Pukekohe, while the Manawatu region expects an average yield. Most of the production in Canterbury will be harvested this month after some extreme weather conditions earlier this season.