Carrots cover one-third of the irrigated cropland and account for more than half of annual gross revenues in agriculture in the Cuyama Valley. A new state law will force farmers to cut pumping as much as two-thirds to restore the depleted groundwater basin by 2040.

The Cuyama Valley in Central California is extremely dry: the valley floor gets just a little more rain than the Sahara. Yet for the past 75 years, this high desert region has been used for water-intensive farming on an industrial scale. It all started with alfalfa; now carrots are a $69 million annual crop.

Most years, farmers pump 60,000 acre-feet of water out of the valley’s giant groundwater basin. That is enough water to supply six cities the size of Santa Barbara. It is also three times the sustainable yield of the basin, or the amount of water that reliably flows in from rain and runoff.

In the heavily farmed central portion of the Cuyama Valley, studies show, the water table is dropping as much as eight feet per year, the ground surface is sinking and well water is 1,000 feet deep in places. Some of the water being sprayed on crops is 33,000 years old. Water quality in the valley is poor. 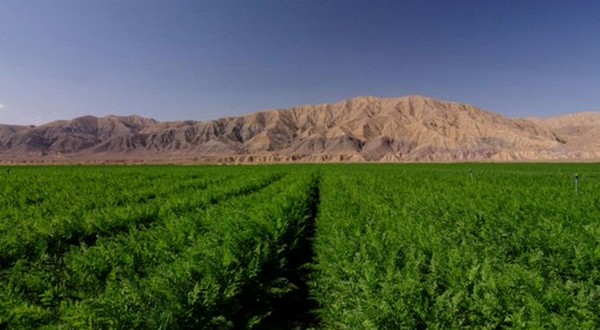 County, state and federal agencies have been documenting the de-watering of this basin since the 1950s, even as the Cuyama River marshlands turned into desert, the cottonwoods died and an entire oak woodland vanished.

But now comes the state Groundwater Sustainability Act of 2014, which aims to halt “significant and unreasonable reduction of groundwater storage.” To comply, growers in the central Cuyama Valley may be required to cut their pumping by as much as two-thirds over the next 20 years. The world’s two largest carrot producers -Grimmway Farms and Bolthouse Farms of Bakersfield- would be hardest hit.