Ban on sprout inhibitor poses a problem for potato storage

The European potato sector will face a significant challenge in the 2020/2021 storage season. The European Food Safety Authority (EFSA) released a report about Chlorpropham (CIPC). As a result, the European Union (EU) has decided to prohibit the use of this substance. This means that it may no longer be used as, among other things, a potato sprout inhibitor. This ban is valid in all EU member countries. The last authorized date of use, however, differs from country to country. For example, in the Netherlands, it was 8 October. The cutoff date for Belgium is 30 June 2020, and it may still be used in France until 8 August. 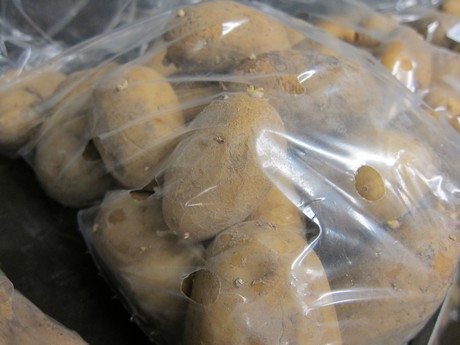 Distant exports
“This restriction is going to have consequences,” says Jan Gottschall. He is the Dutch Potato Organization’s (NAO) policy specialist. NAO members include potato traders, exports, and sorting and packaging companies. Jan foresees significant problems arising for NAO members when it comes to exporting consumption potatoes to distant countries. He estimates about 200,00 tons of potatoes are exported to third-party countries from the Netherlands. Of this volume, around 125,000 tons goes to Africa. Sprouting inhibition plays a significant role when it comes to these destinations.

“Buyers do not want their consumption potatoes to have any sprouts.” The sorting, packaging, and transportation of potatoes to these faraway destinations can, however, take between 14 days and as long as a month. These destination countries include the Ivory Coast, Senegal, and countries in Asia. Jan says that during this long period, sprouting does occur when the potatoes are not stored in a controlled environment, and there is no access to CIPC. Jan also expects the Chlorpropham ban to become an issue for small-scale packers. The sorting, packing, and transport process as a whole for sales in the Netherlands or the European Union is much shorter. Jan, therefore, predicts sprouting will be less likely. 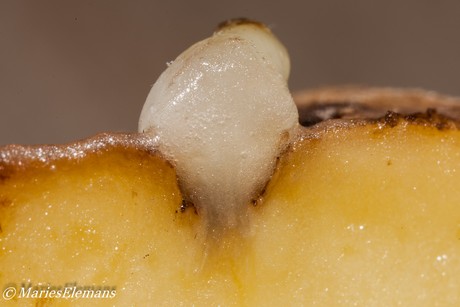 The NAO, along with 23 NAO members, has launched a study into alternatives for the use of CIPC. This research is aimed explicitly at distant exports. “We are looking at how combinations of permitted substances can best work for far-off exports.” This study concerns experimental research into roughly 20 different combinations of sprouting inhibition methods. It is being conducted by the Wageningen University and Research in the Netherlands. The possibility of a temporary exemption scheme is also being explored. This measure should give those affected by the ban time to gain experience with alternative substances.

Temporary MRL
Jan explains that when a product is no longer allowed to be used, the corresponding maximum residue limit (MRL) also expires. Chlorpropham can remain present - even after it is no longer being used - in the walls and floors of storage warehouses and docks where potatoes are stored and packed. This leads to the potatoes being contaminated with CIPC. In this case, the detection limit of 0,01 ppm is exceeded. “A project plan has been devised to test different ways to best clean these kinds of warehouses.”

Half of the sector has applied for a temporary MRL (t-MRL) to the EFSA via the Dutch Pesticides and Biocides Authorization Board (CTBG). “The MRL will be lower than the current MRL of 10 ppm (mg/kg). The CTBG is considering a t-MRL of between 0,3 and 0,5 ppm. This limit offers some room for potatoes that were not treated with CIPC but became contaminated by being stored in tainted cells.”

“The entire decision-making process has to be completed in Brussels. After that, by no later than the beginning of 2021, it will be announced if the EU will pass the implementation of a t-MRL. The European Commission (EC) will set a t-MRL for a period of two or three years. This term can be extended to ten years if research shows that it is impossible to keep contamination under the detection limit. To prevent residue violations in the 2020/2021 season, the EC strongly advised against the use of any CIPC in the 2020 potato crop. This is despite the formal deadline of 8 October 2019 in the Netherlands,” says Jan. 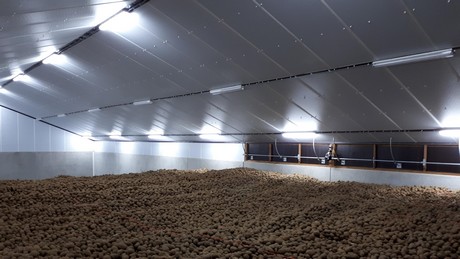 Four alternatives
The Belgian Test Centre for Potato Cultivation (PCA) supports this advice. “There are no restrictions regarding the use of Chlorpropham in the 2019-2020 storage season. CIPC can, therefore, be used just as in previous years. People with new warehouses where CIPC has never been used before would do well not to use any of this substance. It accumulates in places like conveyor belts and the building’s concrete,” suggest Kurt Cornelissen and Ilse Eeckhout of the PCA. “There is not yet any sanitization protocol that completely rids walls and materials of CIPC. In Europe, there is a desperate search for a solution to this problem. A simple cleaning with a brush, vacuum cleaner, and high-pressure cleaner is not enough to remove Chlorpropham residues. It is, however, a prerequisite for deep cleaning.”

In Belgium, the Reskia project researched economically viable storage methods to store potatoes in a residue-poor manner, without compromising on quality. This study was done on the initiative of the PCA and Inagro, a Belgian research institute, with financial support from Belgapom - the Belgian potato trade & processing industry association - and agrifood networking organization, Flanders’ Food. “To date, four alternatives have been identified. These could contribute to curbing sprouting in potatoes. The Reskia project is still studying two other active compounds’ potential, but these have not yet been recognized in Belgium,” state Kurt and Ilse.

The four CIPC alternatives are Maleic hydrazide (MH) - which, in the past, was mainly used to prevent sprouting - Mint oil, 1,4-Dimethylnaphthalene, and Ethylene. These last three are sprayed onto the potatoes during storage. MH is applied in the potato’s field phase of cultivation. “MH is the only solution for warehouse storage that is wholly unsuitable for the atomization of other sprout inhibitors. In cases where one of the other compounds is used, MH can contribute to extending sprout dormancy, and consequently limits the amount of product being used.”

Insulated
The PCA announced that using these new sprout inhibitors pose absolutely no problems for use in newly constructed storage warehouses. However, older warehouses are often not as well insulated or have no ventilation systems. “Growers with older warehouses can, of course, use MH during their cultivation field phase. This process allows for a short to medium-length storage time, depending on the variety, cultivation and grubbing conditions, and the warehouse’s temperature regulation.”

“Those wanting a longer storage time in these older warehouses should seal all the openings and cracks as well as possible. If not, there is no guarantee that these substances will function properly. The filling grade also plays a role. The less open space - with regard to the volume of potatoes - the better the result. New warehouses are, therefore, being divided into separate cells,” say Kurt and Ilse. 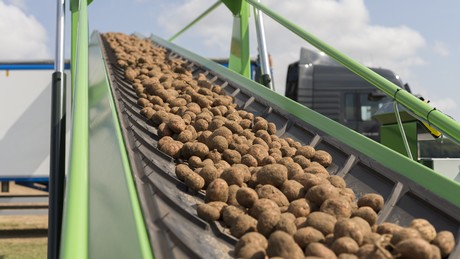 Farm shops
When CIPC falls away, MH is virtually the only alternative for farm stalls with no storage sheds, admit Kurt and Ilse. “People who have no access to a warehouse and run farm shops might be hardest hit by the disappearance of CIPC. As of next season, treating potatoes with this powder or liquid is over for good. Using MH during the field phase is a possible solution here, too, to realize short to medium-term storage times. Using a potato variety that does not sprout easily could also be a solution for medium-term storage. Those who want to sell potatoes in their farm stalls year-round must perhaps consider building a storage shed or refrigerated space. Another possibility is storing the potatoes in crates with a grower who has a modern warehouse (at a fee).”

Higher storage costs
Kurt and Ilse admit that the costs for medium to long term storage will be higher due to the CIPC ban. They think this increase will be worked into contract prices. “It is clear that sprout inhibition without CIPC will be more expensive than a scheme based on using this compound. How much more expensive is not yet clear. The added costs will depend on factors such as the chosen sprout inhibition strategy - which product, and with or without MH - and how prone the potatoes are to sprouting. This is affected by the growth season and grubbing conditions. The new substances are also applied differently. This surcharge will include equipment rentals and contract work costs too.”