The conditions in the tomato market are quite unstable at the moment. The unprotected cultivation is shifting from Northwestern Europe to Southern Europe. This change is putting some pressure on prices, although the prospect is that they will recover in the coming days. The acreage devoted to the crop in Southern Europe has been declining for years and this year there has been a reduction of between 10 and 20%. This drop is hardly having an impact on the price, because the reduction is compensated, on the one hand, by open ground crops from Poland, the Netherlands and France, and on the other, by competing countries, such as Morocco. 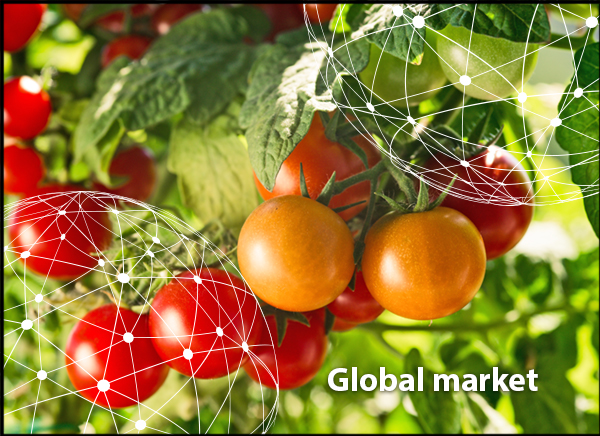 Outside Europe, prices are rising. China is dealing with shortages; Mexico is at the start of the new season, and due to excessive rainfall, the price in South Africa has risen sharply in recent days. However, the prospect is that prices will recover in the coming days. In the US, prices are low due to a sufficient supply at the moment.

The Netherlands: More peaks and troughs than usual
As soon as the supply of traditional, unprotected crops comes to an end and Spain starts shipping more, prices will sometimes come under pressure. That is currently the case, after the higher prices that were reached in early November.

The same fall in prices can also be observed in Belgium. There have been some ups and downs, but the prospect is that the market will recover. In general, the production of protected crops under artificial lighting is under control, so there is no risk of major oversupply. Moreover, a lot is grown under contract.

If we look at the entire previous season, we'll see that the tomato market has been characterized by more peaks and troughs than usual in the supply and prices. This is due to the extreme temperatures recorded in the summer, which caused the crops to suffer heavy blows at times, resulting in production fluctuations.

All in all, despite the concerns that still exist about the Tomato brown rugose fruit virus, of which there have been two detections and fifteen "serious suspicions", according to the latest reports,  the summer season has been moderately positive.

On average, prices haven't been disappointing. In fact, they have even exceeded the five-year average. This was mainly due to the higher average tomato prices in the summer, followed by a dip in October, but the high summer volumes sold for high prices did well.

Belgium: Growth of cultivation under lighting
After a good summer season with good prices, the situation has now changed on the tomato market. The supply of unprotected crops has come to an end, and the protected ones grown under artificial lighting have been in production for several months. The situation in the fall is a little more difficult and the prices are under pressure. The trade is fairly quiet at the moment because of the Spanish tomatoes that are coming back on the market.

In Belgium, quite a lot of growers are still investing in the construction of new greenhouses and in lighted cultivation, despite the fact that it is sometimes somewhat difficult to get things going. In addition, there are Belgian parties that are expanding in the north of France, where tomato cultivation is still very limited.

Germany: Moroccan tomatoes taking over
When it comes to on the vine tomatoes, Dutch and Belgian greenhouse producers dominate the supply in the German wholesale market. For their part, Spain and Morocco are taking over the marketing of large, loose tomatoes. The supply of Moroccan tomatoes in particular is increasing considerably. People are generally satisfied with the quality of the goods available.

As for cherry tomatoes, the volumes had to be reduced in several places, as there were reports of oversupply. In the case of Turkish on the vine tomatoes, prices have been falling in order to stimulate sales.

France: Last tomatoes being harvested
In France, the last tomatoes of the summer season are currently being harvested. In addition to French tomatoes, there are also a lot from Spain and Morocco on the shelves. Due to the low temperatures, consumption has been fairly low in November. Prices are falling due to the large supply and low demand.

Spain: 20% reduction in tomato acreage
This season, the acreage devoted to tomatoes in Almería has been reduced by 10 to 20%. The higher production costs, growing competition from other countries and the spread of pests such as Tuta absoluta make growing tomatoes in Almería increasingly difficult, and the returns and profits are also falling. Over the last five years, this has led to a reduction in the tomato acreage, which in turn has given way to the planting of vegetables with lower production costs and more stable prices, such as zucchini, peppers and watermelons.

Nevertheless, the reduction of the supply is not reflected in the prices, as the fall is partly compensated by the supply of greenhouse tomatoes from the Netherlands, Poland and France, as well as from Morocco. For tomatoes on the vine, the best prices are still paid at Almería's auctions. In general, the prices of tomatoes and other vegetables have remained low during the fall of 2019.

Italy: Fall in tomato production
There has been a reduction in the cultivation of tomatoes. The production in Spain has fallen by 20% and Sicily is following the same trend. Prices for the new tomato season are fairly stable. From August to today, the price at origin of cherry tomatoes (the most representative in the tomato market of Southeastern Sicily) stands at around € 1.30 / kg. "In the last few days, we have been selling tomatoes at the price of € 1.30 to € 2 / kg to major retailers," says a large trader from northern Italy. "The differences in price depend on the origin and the variety. For example, beef tomatoes come from Belgium, and on the vine tomatoes from Italy and Spain.

A series of factors has led to a reduction in the volumes available and, therefore, to a rise in production costs. Climate conditions and plant diseases, such as those caused by the Tuta absoluta and various viruses, mainly cause problems in the summer period. Tomatoes are not generating the same income as a few years ago and growers are now looking for alternatives.

China: Tomato prices continue to rise
The price for tomatoes in China has been rising since October. On the one hand, this is mainly due to the fact that there are fewer tomatoes available on the market and the temperatures are getting cooler. On the other hand, the supply comes mainly from the greenhouses in Hainan, where the production and transport costs are higher, so prices increase.

The current price on the Chinese market is higher than in November last year. Both growers and traders are satisfied with the current market conditions. Tomato prices have been rising since December 2018, but this has had no impact on the wholesale market or in supermarkets. The prices in 2017-2018 were low and that means that many growers have stopped producing tomatoes. This, in combination with the weather conditions, has resulted in tomato prices rising at the moment.

Some special varieties are currently doing well in China. These are the strawberry tomato (season from mid-November to early May) and the cherry tomato (from January to August). Both are grown in Shandong. The price of these varieties is higher and currently fluctuates around 15 Yuan for half a kilo (€ 1.92), which is a 50% increase compared to the price recorded last year, when 10 Yuan (€1.28) were paid.

South Africa: Abundant rainfall (temporarily) causes price increase
The tomato supply on the market is smaller than in previous weeks due to the rainfall recorded in the north of the country. Consequently, there has been a 24% increase in the price this past week. The average price in the country now stands at 7.18 Rand (€ 0.43), which is 21% more than the long-term average price this year. However, if higher volumes reach the market again in December, prices will simultaneously fall.

In Cape Town, tomatoes cost an average of 2 Rand per kg and are more expensive than in Johannesburg. 52% of the tomato supply is traded on the Johannesburg market and then goes to the municipal markets.

Mexico: Positive outlook for the next season
Mexico supplies tomatoes all year round, mainly to the North American market. The tomatoes are grown in greenhouses and the most important region for Mexican tomatoes is Culiacan Sinaloa. The season runs from December to the end of May. A good harvest is expected following the good weather conditions of recent days. The most important tomato varieties are the Roma, cherry, Oxheart and on the vine. The prices are somewhat higher than usual because the harvest has yet to start. Still, the prices currently stand at about the same average level of last year.

United States: Notable supply of plum tomatoes on the market
At the moment, tomatoes are widely available and come mostly from Mexico and Florida. "Stocks are larger this year than the last," says a trader. "Last year, we suffered the impact of hurricanes, floods and frosts, but that hasn't been the case this time." The growth in the share of plum tomatoes is particularly noteworthy.

There have been some problems with the heat in Florida this season which caused the tomatoes to deteriorate somewhat. With cooler weather in the coming period, the quality should improve again. Regarding the demand, traders expect it to increase ahead of the holidays. The prices are now low due to the abundance of tomatoes and the somewhat lower quality. The price for plum tomatoes is lower than last year, although traders are seeing some market stability and there has even been a slight rise in prices this past week.

Looking ahead, the month of January in particular is exciting for the North American market. Bad weather in Florida can have an impact on the market and in the second week of January there are normally plenty of tomatoes from Mexico hitting the shelves.

Australia: Growth in the share of greenhouses
The Australian tomato production grew by 14% in 2018, reaching 484,073 tons. After potatoes, tomatoes are the country's main crop in terms of volume. The value of the tomatoes did fall by 5%. Exports increased by more than 52%, but remain modest, with just 804 tons. Meanwhile, 926 tons were imported. Although most tomatoes are grown in the open ground, the greenhouse acreage is expanding.

New Zealand: Decline in exports
There was a peak in the import of tomatoes last year. Imports actually doubled in 2018 compared to the previous year, while exports fell. There was a remarkable drop in the demand from Australia, while the Japanese market became more important.