The Spanish kaki season started in October and there are certainly no shortages on the market at the moment. The bad weather in September caused little damage to the kakis and demand for the fruit still has plenty of room for growth. In Europe, kakis are mainly consumed in France, Spain, Portugal and Italy. In Western Europe, the demand is still low, but it is also on the rise. There is also a lot of potential for the demand to rise in the US. Offering special varieties can sometimes make the difference. For example, the Fuyu is popular in the US and the Rojo Brillante in Europe. In China, having special varieties can also make a difference on the market. 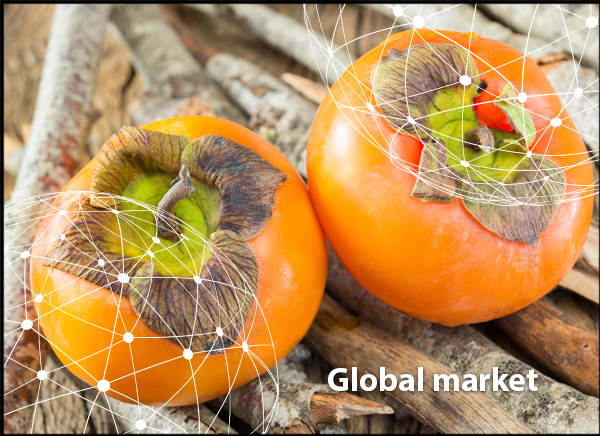 The Netherlands: A lot of Spanish kakis, but also sales growth possible
There is no shortage of Spanish kakis this year, as the productions in Spain are good this season. The weather conditions have been ideal and the storms in September have had little impact on the fruit. The prices are not too high. Dutch importers are charging a little under 1 Euro per kilo. A trader sees kakis as a product that has to compete against mangoes, and given that the latter often comes from overseas, he expects sustainability and environmental trends to give the former an advantage. In Valencia, older citrus varieties, such as the Satsumas and Clauselinas, have been replaced by kakis in recent years, although that switch in crops is already past its peak.

Belgium: Slight increase in the demand for kakis
With the start of the Spanish citrus season, Spanish kakis also start being supplied again by Belgian importers. There is a big enough supply on the market, so prices are at a normal level. The bad weather in Spain has not had much of an impact on the quality of the fruit. Kaki consumption in Belgium is still slightly increasing, but the product is not yet as popular as some citrus varieties. Since it is getting a little colder, the demand is also increasing and things are looking good for the kakis.

Germany: Disappointing sales
The German wholesale market almost exclusively demands Spanish kakis, even though the fruit is also being grown in other places at the moment. The first batches from Spain were marketed around 2.5 weeks ago. "For at least a week, Spanish kakis already taste as they should. The first fruits of the season are usually green and not yet ripe enough for consumption," says a German importer.

The sizes available are generally normal, although the smallest sizes (which are sold in trays by retailers) are difficult to find. In the wholesale market, the 7 and 15 kilo packs are in great demand. In the last two weeks, the weather in almost all Spanish growing areas has been very turbulent, briefly interrupting the supply. However, the harvest has already been back on schedule for a few days.

The kaki market situation is currently not very encouraging. "There is enough production available, but the sales are unfortunately disappointing," said a Swiss importer. In Germany, too, people are not satisfied with the current sales. Kaki sales to the hospitality industry have been bad for several years. "We have barely sold two items last week," said a catering supplier on the Berlin wholesale market. Sales have therefore remained stable for a number of years and appear to have reached their peak.

France: Problems with the appearance of the kakis
The demand for kakis remains stable. When it comes to the crop's expansion in recent years, there is still a slightly bigger supply than is good for the market. As a result, prices remain stable or even fall. The European countries where most kakis are consumed are France, Spain, Portugal and Italy, and smaller amounts are purchased in Germany and the UK. This year, the quality of the kakis has been somewhat affected, with black spots appearing on the fruit, and the cause of this issue is still unknown. In any case, only the appearance of the kakis is affected; the taste and texture are still good.

Spain: New markets are a priority for exporters
The sector hopes that the kaki production will recover this season. Last year, the harvest was reduced by more than 50%, but this season, as long as the weather conditions remain good, there is the potential to harvest 450,000 tons for the European market. So far, things have been going well. The kakis have not been hit by hail, frost or diseases. The most important variety in Spain is the Rojo Brillante.

The harvest kicked off three weeks ago with high demand and good prices on the market. However, last week, the demand fell by almost 50%, and so did the prices. The supply is currently on the rise. Many growers are therefore slowing down a little to ensure that the supply stays in balance with the demand and that prices remain acceptable. High temperatures in Spain are also not really helping, since the kaki is an autumn product. The previous season was good with regard to prices, as the volumes fell by 50%. Now that the harvest is reaching its peak, the cooperatives are mainly focusing on promoting kakis on the domestic market.

The acreage devoted to kakis in Spain is quickly expanding and the demand hasn't been able to keep up with it. The growth has now stopped, but the production of the younger orchards is still growing. It is therefore a priority for Spanish exporters to find new markets. Thailand, Vietnam and especially China are in the picture as possible destinations. There are also opportunities in in South America, namely in Peru and Colombia. The possibility of marketing the fruit in the United Arab Emirates is also being considered. A major concern for growers is the impact of diseases that are becoming increasingly threatening.

Italy: Harvest is lower than last year
Despite the reduction of the acreage, Italian kakis are expected to be better than last year in terms of quality and size. This is mostly to thank to the improvement of agronomic techniques. Hail has caused damage in some Italian regions, with losses of up to 30% of the production in some cases. Large amounts of Spanish kakis are currently available on the market.

The crop's cultivation in Italy takes place in the south of the country, as well as the northern part of the central regions. The most popular varieties are the Tipo and the Rojo Brillante, with the latter becoming increasingly popular on the market. The best regions for kaki cultivation are in Sicily (Agrigento and Caltanissetta) and Campania (Caserta). This year, a good harvest is also expected in Sardinia (Villacidro and Muravera). The Italian sector says that the market is looking good at the moment. “Prices are right. The production is 15% lower, but the quality is good. We sell most of the kakis in the domestic market, and a small volume, consisting mostly of Rojo Brillante, is exported to neighboring countries. This year, 60% of the production corresponds to the Tipo and 40% to the Rojo Brillante.”

Israel: Season starts in November
The Israeli season is starting next week and traditionally lasts until February. The most important kaki variety grown here is the Sharon Fruit. This year, things are looking promising for the crop and growers are looking forward to a good season. The demand in the domestic market is good for Israeli Sharon Fruit, and producers are also hoping to export more to the United States this year. In addition to the US, Russia is also an important market for Israel. The country has managed to take advantage of the Russian boycott on European kakis.

Azerbaijan
Five years ago, Azerbaijan bought the Spanish Rojo Brillante to be able to plant it there. This year, the prospect is to harvest 200,000 tons of kakis for export to the Middle East, Russia, Ukraine, Moldova, Belarus and Kazakhstan. The Spanish kaki is doing well in Azerbaijan's climate.

China: Large supply on the market
In October, most production areas starting yielding kakis in China. It is not yet a popular fruit among consumers, so there is still room for growth. The first production areas that are starting up are located in Hebei, Shaanxi and Taiwan. The harvest is about the same as last year, but some areas suffered from excessive rain, which took a slight toll on the quality of the kakis. There is currently a great supply on the market, which is fueling competition and pushing prices down. However, special varieties, of which there is more and more every year, are doing well and their prices remain stable. Furthermore, several traders hit the market too early, and this has been having an impact on further sales, because consumers were given a product that was not yet ripe and their experience with this fruit was therefore negative. Lastly, the export of kakis to countries in Southeast Asia is slowly starting, so there is also a market for Chinese kakis there.

United States: Delay in the season due to warm weather
The harvest in California has been delayed by about five days due to the warm weather. Currently, around 10-15% has already been harvested. It is primarily a question of waiting for the coloring of the kakis to improve, which requires lower temperatures. The production volume is slightly greater than last year's, and given the later start of the season, there should still be enough kakis available for Christmas.

The demand for kaki is good in the US, where there is a growing interest in the fruit. The rise in the demand for the Fuyu variety, which is easy to consume, is particularly noticeable. The Hachiya is used for baking and is therefore less popular among younger consumers. Organic kakis are also becoming popular. "At the moment, everything that is orange is popular in stores," says a grower. More information about how to consume kakis is also needed in order to give consumption a boost. At the moment, the price is good and slightly higher than last year. "If the kaki industry continues promoting the fruit, we could maintain the current price level," said a grower.

South Africa: Bloom delayed by two weeks this year
Kaki cultivation in South Africa is carried out mostly in the Southwestern Cape. The plantations are now in bloom, about two weeks later than last year. The cause for this is the abnormal weather conditions and the temperature fluctuations. It is also fairly dry at the moment and the Southwestern Cape did not get excessive rainfall, unlike Cape Town last week. The harvest will start in April 2020 and many of the kakis are intended for export to the northern hemisphere.

Australia: Industry wants promotion of domestic demand
Australia is only a small player on the international market, with less than 1% of the global kaki production. Last year, 2,519 tons were grown, but the value of Australian kakis did increase. Exports also increased by 28%, to 183 tonnes, and by 48% in terms of value. The market is now looking into whether it is possible to stimulate domestic demand. Only 9% of households consume kakis. The fruit is also imported from New Zealand and the US.

New Zealand: Export season extended with new techniques
New Zealand's kaki exports have increased by 20% in terms of value and by 9.5% in terms of volume. The season runs from April to July. New exporting techniques have made it possible to extend the export season to August. The most important variety is the Fuyu.