Vietnam is a market of interest for Chilean fruit exporters

The Association of Fruit Exporters of Chile AG (ASOEX) and ProChile carried out a Prospecting Mission in Vietnam with representatives of ten fruit exporting companies from Chile from August 28 to the 30. The tour included various activities in Ho Chi Minh City, such as workshops, B2B meetings, and visits to local markets and retail. After the trip through Vietnam, the Chilean delegation went to Shanghai to participate in the inauguration of Chile Experience, within the framework of the Chile Week China event and, subsequently, the mission will travel to Hong Kong, where it will participate in the Asia Fruit Logistics 2019 fair. 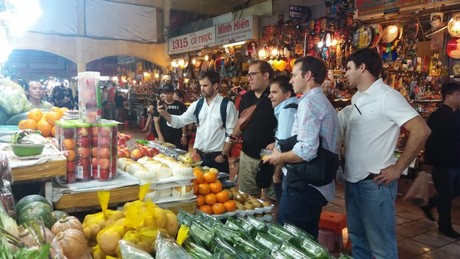 Why Vietnam?
Vietnam is located in Southeast Asia, and it is the easternmost country of the Indochina peninsula. It has 93 million inhabitants, and it is the sixteenth most populous country in the world and the eighth largest in Asia. Vietnam has become one of the fastest-growing economic countries on the continent, with a PPP GDP of $ 648.243 million (est. 2017), so the purchasing power of the population has increased markedly.

“Chile is seen as an important supplier of fresh fruits in Vietnam, and both countries have a free trade agreement in force since 2014. We believe that it is important to strengthen our presence in this market, given its economic growth and increased consumer awareness for adopting healthier diets. In addition, Chile is recognized for offering high quality and safe food. Another advantage for the Chilean product is the counter season, as the availability of many of the Chilean fruits coincides with the Vietnamese festivities, when fruits are usually given as presents to friends, colleagues, and family, ” stated Nguyen Thanh Quang, the representative of the ProChile commercial office in Ho Chi Minh City, Vietnam.

“Vietnam is a market that is offering very good possibilities for our apples, table grapes, and cherries. An interesting aspect of this visit was that importers and retailers expressed their interest in having new grape varieties. In addition, there is a high interest in Chilean cherries to celebrate the Lunar New Year, the Western New Year, and other festivities that coincide with the Chilean season of these fruits,” said Charif Christian Carvajal, the Marketing Director of ASOEX.

Exports
According to data presented by the SAG / Customs, during the 2017-2018 season, Chile exported 248,702 boxes of table grapes to this destination, i.e. 39% more than in the previous season.

It is important to note that, up until May 2019, the only Chilean product that could enter the Vietnamese market was the table grape. However, a new agreement between both countries allows the entry of Chilean apples, cherries to Vietnam, and grapefruit and mangoes from Vietnam to Chile.