The local broccoli seasons in Canada, much of the Northeast and the Midwest are set to be delayed this year due to persistent rain in the growing areas. Suppliers suggest that many of these areas have been pushed back by up to a few weeks. It means that by far the majority of North America supply is relying on California as well as Mexico.

“Many of the local broccoli deals are delayed so as of now, almost all product – especially anything of decent quality – is coming from Santa Maria and Salinas,” said Mark Sato of Fortune Growers. “Salinas has had some hot weather over the past week, with temperatures reaching triple digits. This has resulted in product coming on fast, but we are still seeing good quality. Canada, specifically Ontario, is behind schedule a few weeks although there are reports that some growers in areas that were less affected by spring precipitation will be ready to start shipping this coming week. Maine is also tracking about a week behind with a target start date of mid-July. Pennsylvania is currently producing some broccoli, while any local Midwest crops are delayed.”

Sato added that Washington has also just started up this week. “California is pumping out some excellent volume, sufficient to cover current North American demand. Washington did start in a small way this past week and we should start seeing that come through over the next few days. By all accounts, they have experienced good weather during the growing season.” 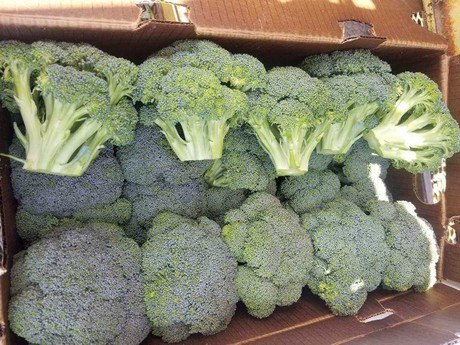 Prices steadily decreasing
California is producing good volume and Mexico is currently experiencing some quality issues. Both of these factors are putting downward pressure on prices. Compounding this is the fact that broccoli tends to be less in demand during the summer months, when consumers are preferencing other fresh produce items. Overall, the market is pretty steady with very little in the way of extreme swings.

“Prices have been steadily coming down and are now below average,” Sato observed. “Demand is not as high during the summer, so in spite of the current state of production, there isn’t enough demand to support higher prices.”

The situation is not likely to change soon either. “There is nothing major on the horizon that would cause prices to fluctuate tremendously,” Sato continued. “Because of the recent warm weather in California, there is the chance we might see some moderate gapping later, but not enough to surprise the market. Furthermore, the local deals will eventually start which will not be conducive to higher prices.” 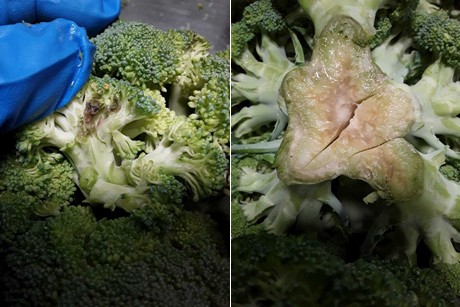 Some of the issues that growers face more of in summer, including pin rot and oxidized butts

Dealing with Mexico’s summer broccoli issues
Although Mexico is a year-round broccoli producer, summer sees a dip in production as inclement weather conditions cause problems. With warmer and generally more moist conditions, Mexico’s broccoli production zones are more prone to pin rot and insect pressure. One of these insects is the Diamondback moth which is particularly hard to deal with because it is largely resistant to pesticides and it’s also difficult to spot as it hides well inside the broccoli crown.

“Mexico does produce at this time of year, but production is low and we see more quality issues,” Sato explained. “About three-quarters of product coming across the border now has some sort of problem. The Diamondback moth is especially troublesome, and we have had to find new ways to manage them. Some of the things we do include shaking the heads out in the field to check for the presence of the moth. Additionally, we perform sample cuts and grow vegetation on the outside of the field to try and attract them out of the fields. One of our growing regions at this time of year is Guanajuato where we grow broccoli at higher elevations to try and mitigate typical summer issues. We are also working on planting different varieties which are less susceptible to problems.”