At the moment, the price of pineapples on the world market is fairly stable. The quality is generally good. There are small volumes on the European market and both supply and demand are limited. The demand in Germany is even declining somewhat compared to previous years.

In the United States, growers have decided to limit their production because prices are currently low. Importers are also keeping the volumes under control due to this price development. The production in China has increased. As a result, prices were lower and the demand was also higher. The production arrived earlier than in previous years thanks to the mild weather. In Australia, there's a threat of oversupply due to the weather conditions this year. The production is mainly sold on the domestic market. 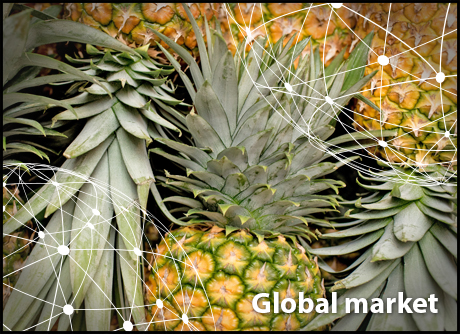 The Netherlands: Pineapple market doesn't generate great profits
According to importers, the situation in the pineapple market has continued to be difficult in recent weeks. There has been a slight improvement since January, but things have been very bad for a long time. Sales and the demand in the day trade stand at a very low level. Prices oscillate between 7 and 8 Euro, depending on the size. The prospect is that the supply from Costa Rica will stop after the second quarter. Importers hope that due to a lower supply, prices will again rise above 10 Euro.

Belgium: Stable prices and little supply
The pineapple market is fairly stable and there is a rather small supply. Sales are going smoothly and the prices for the Sweet Gold pineapple remain immovable.

Germany: Limited demand, small volumes
In Germany, both the demand and the supply are currently limited. The imported volumes, which come mainly from Costa Rica, Cote d'Ivoire and Ghana, are also relatively low. Given this market situation, the price level is still somewhat acceptable, reports an importer from Hamburg. This is due to the relatively good product quality.

In the long term, pineapples are losing relevance, especially when it comes to the standard production. Pineapples shipped by air and special varieties, however, are popular in the German market. Consumption per capita has declined slightly across the board. There are opportunities within the convenience segment. The younger generation in particular has a strong preference for fresh, sliced ​​pineapples, according to a trader.

After months with very low prices on the pineapple market, the situation started changing at the end of February. In March, the volumes were low and the prices reasonably high. At the moment, the market situation is very complex, especially for organic pineapple producers. Many growers have stopped growing organic pineapples because the low selling prices did not cover the costs of production. A small part of the organic supply comes from Costa Rica, and another larger part comes from Togo and Cote d'Ivoire. Prices are high and the supply reasonably low.

Italy: Lower demand for pineapples around the holidays
For about a month, there has been a small stock of pineapples from the major pineapple producers: Colombia, Ecuador and Costa Rica. The reason for this is the changing weather conditions and excessive rainfall. This situation may persist for a few weeks. Given the small stocks (20 to 30% less), the price has risen by around 15 to 20%, without this taking a negative toll on the demand. During the festive season, sales increased, but the results cannot be compared with those of previous years, when there was strong growth in the demand at Easter and Christmas, as was the case about 5-10 years ago. This year, the growth in the demand during the Easter holidays was much weaker.

From the end of May to the end of June, the "natural flowering" stage should take place in the producing countries, and a very large supply of pineapples can therefore be expected.

There is also a growing interest in Italy for crownless pineapples. Thanks to the developments in the ready-to-eat segment, it is possible to bring this product onto the market without generating too much waste.

China: More production, lower prices, better quality
The most important pineapple growing areas in China are in Hainan, Taiwan and Guangdong. The season in Hainan and Guangdong already started in November and will continue until May. The production has been greater than last year's, and as a result, the prices have also been a little lower. Consequently, there has been a greater demand for pineapples on the part of consumers. The quality of the fruit has also been higher than last year.

There are also import pineapples on the Chinese market. Chinese pineapples have to compete against pineapples from countries like the Philippines, Thailand, Malaysia and Costa Rica.

The source adds that a good production of Costa Rican pineapples is expected until week 25-26.

In addition to Costa Rican production, there are also imports from Mexico.

Price drop?
Although there are more than enough pineapples available, growers and shippers expect a reduction in the production. “On the West Coast, major players in the market are reducing their prices. This means that other parties must also follow.”

Compared with the same period last year, prices are generally low. "The Mexican production that comes on the market is also keeping this price a little lower."

Looking ahead, imports are expected to fall slightly. “Importers are reducing their imports because they expect prices on the market to fall. At the moment, the price oscillates between $ 10 and $ 10.50 and is likely to fall below $ 10. Between now and the end of June, the market should become smaller.

Australia: Threat of oversupply
There is news that some pineapple growers in Central Queensland may have to deal with oversupply in the coming months. The cause of this is the extreme weather, mainly heat waves during the summer. The weekly volumes could grow by almost 300%, although not all growers will immediately suffer this problem. Piñata Farms expects a "fairly normal" season in the winter. The company has distributed its production between three different locations in Northern Australia to be prepared against the extreme weather. General Manager Gavin Scurr said that the surplus could have an impact on all growers, if we look at its influence on market prices. Another challenge is the rising demand during the winter. After all, pineapple is a fruit that is in demand especially in the summer and is not as easy to process as, say, bananas and berries.

Recent statistics from Hort Innovation show that by the end of the year, in June, 76,002 tons were produced with a value of $ 53.4 million. This was about the same as in previous years. 40% of Australian households bought pineapples. There were no exports of the fruit because all stocks were intended for the domestic market, 62% for fresh consumption, and 38% for processing.