A number of citrus packhouses in Limpopo have taken the drastic decision to suspend packing while on some farms harvesting has been stopped until coming Monday.

A citrus trader describes the situation at their Limpopo packhouse as "a great game of Tetris" as they try to find space for all the pallets.

"We reached gridlock in the packhouse yesterday and we stopped the harvesting teams. We physically cannot fit in one more pallet, outside there are harvesting bins standing full. It could not have come at a worse time."

“Containers aren’t getting from the cold store to the vessel, trucks can’t offload containers at the cold store and then return to us to complete the circle,” a packhouse manager explains, saying that they hope by next week the illegal strike – which is widely denounced by the legitimate truck driver unions – would have ended.

Limpopo packhouses that are continuing to pack citrus and avocados report that transport is being significantly slowed and that it's becoming increasingly difficult to get trucks.

Some fruit exporters have decided not to move any loads until the threat of violence has subsided.

Arson attacks on trucks across the country

Many transporters took their drivers off the road on Monday afternoon, with no activity on Tuesday. At the moment drivers are only operational during daylight for their own safety. Many truck drivers coming from the north stop off at truck stops in Johannesburg for the night, instead of driving straight through to the coast.

“It’s having a massive impact on Limpopo farmers because packhouses are becoming full and there are trucks that can’t access certain areas,” says Daniël Bosman of Werda Cargo.

“Where a trip from Limpopo to Durban usually takes you between 18 to 22 hours, it can now take up to 48 hours on a single load. It has a very big effect on the transporter in terms of costs and income and of course on the exporter as well because the product should be on the move but it isn’t.”

Citrus avoiding Cape Town harbour has opened up space at Cape cold stores
The impact is expected to be felt on vessels that have to sail during the coming days, resulting in a delay in product reaching market.
The EU shipping schedule is already under a lot of pressure.

At Durban cold stores are full while there are Cape Town cold stores reporting that they aren't as negatively impacted by the truck shutdown as they have been by the low productivity at Cape Town Harbour.

The decision to take Western Cape citrus to Eastern Cape harbours  has cost Cape Town cold stores millions in lost income but it has cleared space which is allowing them currently to avoid the congestion  experienced at Durban cold stores. 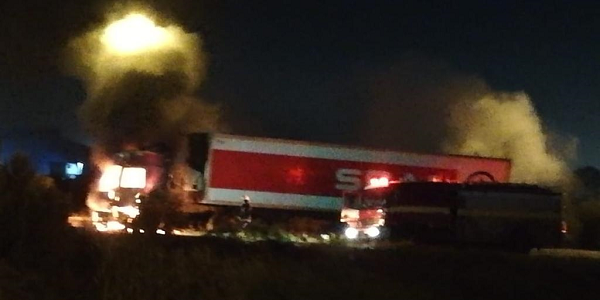 Legitimate transport worker unions distance themselves from shutdown
Trucks were burnt out yesterday close to Cape Town and Johannesburg, with a randomness to attacks that is different from last year’s strike, notes Gavin Kelly, CEO of the Road Freight Association that brought an interdict against the leaders of the group that is inciting violence against trucks, ostensibly in protest against the employment of foreign truck drivers without valid work permits, as well as against the National Commissioner of the South African Police Service.

The group – whose leadership disown responsibility for the strike – claims that more than 90% of truck drivers operating on South African roads are foreign. Xenophobia has been welling up in South Africa as the economy has slowed down.

Gavin Kelly points out that South African law makes ample provision for the just resolution of the allegations of the systemic employment of foreign nationals illegally in the country, in order to pay below sub-minimum wages.

Moreover, he says, registered transport worker unions have stated that they have not received these complaints from their members. The unions have distanced themselves from the strike, as they did last year when it also broke out.

Unfortunately, he says, it has not been clear what the outcome has been of the Department of Labour’s inspections in response to last year’s complaints, and whether any companies were found to be contravening labour laws. It would be helpful if the department were to either dispute or corroborate the controversial claim that fewer than 10% of South Africa’s truck drivers are locals. 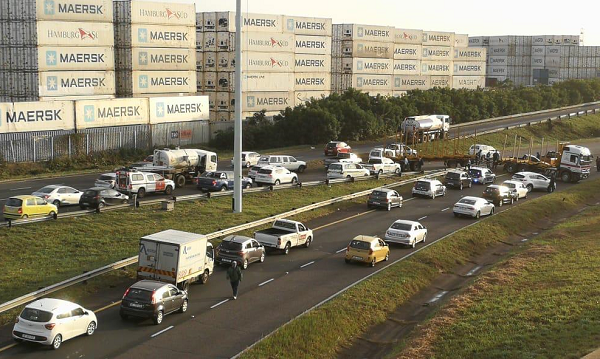 A truck blocks the road in Cape Town

The organisation apparently behind the violence, the All Truck Drivers Foundation, this morning stated they were planning to continue their  truck shutdown. They didn’t attend a meeting with government and other truck organisations to which they were invited yesterday.

“We really can’t afford this in a time when we are already bleeding,” says a transporter. “It’s really hurting us. You don’t know where it will strike next in the country. Our drivers are very nervous.”