Alwin Gräper e.K. on the increasing relevance of covered cherries in the Alte Land

Sweet cherry cultivation is very well established in southern Germany, especially in Franconian Switzerland and Rhineland-Palatinate. However, tons of sweet cherries are also harvested in the north in summer. Due to increasing specialization in 'covered' cherries, the Alte Land region in particular has caught up strongly in recent years. At the start of harvesting of the main varieties, named Kordia and Carmen, we spoke to the stand management of Alwin Gräper e.K. at the Hamburg wholesale market.

All summer fruit - such as berries and stone fruits of all kinds - are now available in full, buyer and seller Arif Demirtas tells us. "Covered cherry cultivation has developed rapidly in the past few years, with sweet cherries accounting for the largest share of the total with over 95 percent. In week 26, the first main crop of the firmer varieties Carmen and Kordia arrived. In addition to the rooftop cherry, there will also be first outdoor product in a few days." Thanks to CA cold storage capacities, the Altländer cherry season could meanwhile be extended to the end of August. 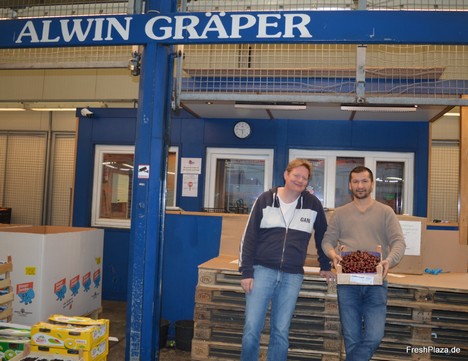 At the moment, prices fluctuate at around €3,50-4,00 per kg for the main sorts of the usual market sorting (28+). Smaller goods, on the other hand, are being traded at somewhat lower prices. Demirtas: "In relation to the increased production costs, the prices have so far been rather too low. Compared with imported goods - from Turkey or Spain, for example - German sweet cherries are nevertheless the most popular, especially among premium customers, which in turn is due to the high quality of the local produce." 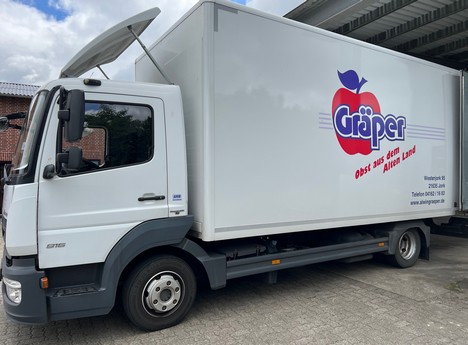 Summer apple harvest ready to get underway
The traditional enterprise Alwin Gräper dedicates itself already for decades predominantly to the procurement as well as the selling of fruits from the Alte Land before the gates of Hamburg. In addition, tropical fruits and exotics, for example from Spain and Italy, are traded. The company mainly serves regional market traders and specialist retailers. Parallel to the covered cherries, New Zealand Gala and regional apples from last year's harvest will continue to be traded.

"We are in the process of marketing the last remaining stocks from the CA warehouses and at the same time we are starting with the first newly harvested summer apples of the Lodi variety. The first summer apples from the Alte Land are expected to be available in the first week of August."