Whilst sweet potatoes remain an increasingly popular product in many countries, some markets have struggled to make a profit from the crop this year due to the rising cost of production, as well as the effects of the invasion of Ukraine, and labour and water shortages. In the Netherlands, importers feel that the prices must go up in order to make them worth selling. South African growers are also feeling the pinch of rising cultivation costs, and North American growers complain of an oversupply on their market, whilst home grown sweet potatoes are increasingly popular in the Netherlands and Germany 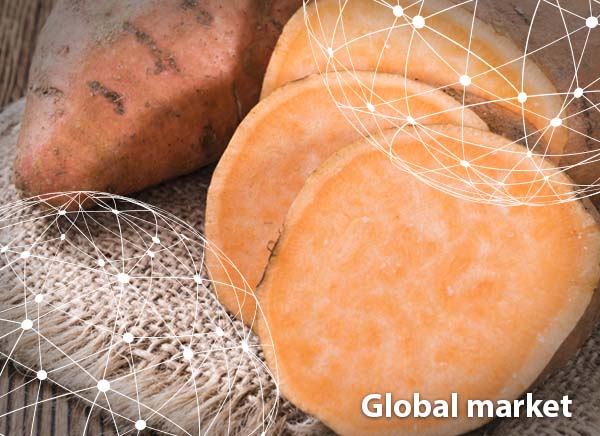 Netherlands: "Yields of sweet potatoes must increase to cover costs"
Cost increases are making it a tough year for sweet potatoes, regardless of the country of origin, according to a Dutch importer of North American sweet potatoes. "It is therefore difficult to grow cost-effective crops for every grower of sweet potatoes. In addition, the quality of this season is not the best that we have seen and the harvest is quite large, which also creates a certain pressure to empty the shed before the new season starts. One thing that is certain is that there will be much less available next season because there is little ability to grow again due to the low prices."

A Dutch seller of Portuguese sweet potatoes is more positive. "Because there were fewer lockdowns than in previous years, I had expected a year of stabilisation, but we managed to achieve a positive result. The sales of organic sweet potatoes are also going remarkably well. The German-speaking retail sector in particular is extremely fond of Portuguese sweet potatoes; sales to Dutch supermarkets are still lagging behind. Furthermore, in Southern Europe 20% fewer sweet potato plants have been sold and Egypt has 40% less acreage, so we go into the new season with confidence.

A Dutch grower also sees great potential in this relatively new home-grown crop. "The only problem is that the crop cannot be grown on just a few hectares. Last year, we achieved a yield of forty to forty-five tonnes gross per hectare, but the yields have to increase further to cover the costs. We are not so worried about the sales. We have noticed that the demand for sweet potatoes grown in the Netherlands is increasing."

Prices as well as the demand have remained stable compared to the previous year and shown very little price fluctuations. At the beginning of the season, prices were somewhat high, but they dropped slightly in the course of the season and have risen again at the end of the season.

While a few years ago mainly overseas produce was imported from countries in South America or the USA, there is now enough produce on offer from Europe, so that more European produce is now being used nationwide, the expert says. Although there are different varieties on the market, the orange Beauregard variety remains the most popular.

France: Good sales for French sweet potatoes
The sweet potato season ended in mid-March. Some producers based in the south of France have suffered this season of rains causing some losses and forcing some growers to throw away a small part of their harvest. Currently on the French shelves we find the Spanish origin which has taken over. The sweet potato is a product that is consumed in winter or mid-season, the demand is still there and sales are rather good.

Italy: Volatile sweet potato campaign
"This year, as never before, the sweet potato campaign has many unknowns. Now, we are starting with the first plantings, but we still do not know how many hectares in total we will cultivate, because of the increased costs. We should start with the harvest at the end of August. Last year we could have anticipated it, but we didn't because the temperatures were too high", an Apulia producer says.

Spain: Sweet potato production will decrease this campaign
Everything indicates that this season the combination of various factors could contract the Iberian production.

"In Spain and Portugal a significant reduction in the harvest is expected for the 2022/23 campaign," explains an industry representative. “Last year there was a great supply of product that had an impact on prices. Competition from outside the European community was brutal, and not just from Egypt; there were also product arrivals from South America and South Africa that do not even meet the requirements that are demanded of us in Europe. They are countries in which labour is also much cheaper and they establish their product in Europe at a price that makes it impossible for Spanish or Portuguese sweet potatoes to compete."

“On the other hand, there is the issue of water. Climate change has meant that sweet potatoes can be planted in many places, but we must not forget that sweet potatoes are a vegetable of tropical origin and need suitable conditions to grow. Andalusia in the 90's was the region that dominated the cultivation of sweet potatoes in Spain and almost throughout Europe; In the past, the California variety was sown, but as of 2003 there was a change in trend and the cultivation of the Beauregard sweet potato spread, the variety that is currently marketed throughout the world. But this year the drought in the Andalusian fields has reduced the cultivated area."

"The war has also influenced this campaign, and in different ways," he says. "On the one hand, in producing countries such as Hungary, the workforce available for this campaign has decreased. On the other hand, when the supply of cereals from Russia and Ukraine was cut off as a result of the conflict, the price of wheat, barley or malt rose to such an extent that many farmers, coinciding with the sowing date, decided to plant this year in their cereal fields.

"Harvesting will begin in Spain in mid-August/early September, but due to all these factors, we estimate that this campaign, the Spanish sweet potato harvest could fall by up to 40% compared to last year."

Egypt: Pressure on sweet potato profits
The Egyptian sweet potato season has just started. Farmers in Egypt began cultivating sweet potatoes amid great fears of market stagnation in Europe, as happened last season. It is noteworthy that last season there were huge increases in the prices of fertilizers and pesticides, as well as the prices of packaging materials and the prices of internal transport and sea freight, and these increases do not seem to stop. Things have been made even more difficult due to the ongoing war between Russia and Ukraine.

The demand is very quiet, as the consumer prices are high due to transportation cost and packing materials have also become more expensive. The price of shipping a refrigerated container to European ports has reached 4000 dollars, and the price of a 6 kg carton box has reached 0.80 euro. It is expected that the cultivated areas will decrease significantly this year, about 40% in comparison to last year. This is due to farmers not achieving any profits last season, as the cost increased without an equal increase in the selling price of the product in European markets. This made farmers look for other crops that would generate better income for them and their families, such as Egyptian cotton and rice.

South African sweet potatoes are exported in bulk for repacking by retailers in the EU, the UK and to the Middle East at the moment, a young trade driven by a small number of growers who have mastered the process of curing their sweet potatoes for a long shelf life.

The local market is fairly quiet because the economy is under pressure. On the municipal market the average price is R4.30 (0.25 euro) /kg for a 2kg box. Approximately 70% of South African sweet potato is grown in the north of South Africa (mostly North West Province and Limpopo), and some in the Western Cape.

Other growing regions for sweet potatoes are Mississippi, Arkansas, Louisiana and California. The grower-shipper also notes that African exports of sweet potatoes are strong this year which also affects exporting opportunities for North Carolina.

As for demand? She wishes it was stronger, though it does look similar to this time last year. “You’re just trying to move them at a decent price but the price isn’t good,” she says.

She notes that pricing was stronger at the beginning of the season for sweet potatoes but then at peak demand time, the holiday season, pricing was discounted. “That price was already a little lower than last year and it’s not crept up much from holiday pricing,” she says. “And then growing costs have all gone up--they’ve doubled and tripled in some aspects--and labor costs have increased again this season.”

In turn, she believes the pricing will hold or soften even more from here on in. “Especially since growers are planting now and have to make room for the new crop,” she says.