A. P. Moller - Maersk, global integrator of container logistics, today signed an agreement with Saudi Ports Authority “Mawani” committing to an investment of 136Million USD (510 million Saudi Riyals) over a period of 25 years to set up an Integrated Logistics Park at the Jeddah Islamic Port in Saudi Arabia.

The agreement was signed in the presence of His Excellency the Minister of Transport and Logistics, Chairman of the Board of Directors of the Authority, Engineer Saleh bin Nasser Al-Jasser, Richard Morgan, Managing Director Maersk West & Central Asia, and several officials of related sectors. The agreement was signed by His Excellency the President of the Saudi Ports Authority, Mr. Omar bin Talal Hariri, and the Managing Director of Maersk Saudi Arabia, Mr. Mohammad Shihab. 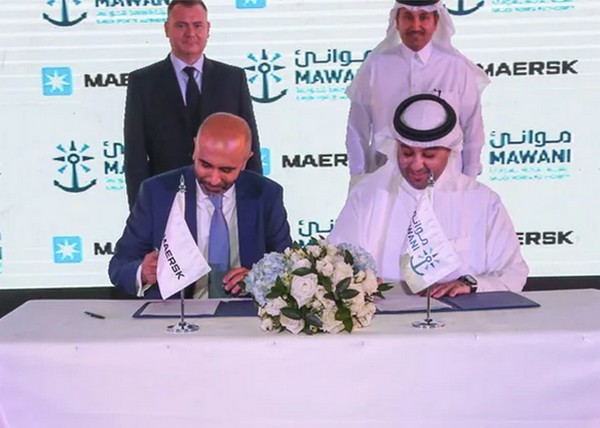 The greenfield project spread over an area of 205,000 sq. m. will be the first of its kind at the Jeddah Islamic Port offering an array of solutions with an aim to connect and simplify the supply chains of importers and exporters in the Kingdom. Maersk will also be investing heavily in renewable energy to power this facility and eventually achieve carbon-neutrality. The project is expected to create more than 2,500 direct and indirect jobs in Saudi Arabia.

A vision for the future
Saudi Arabia’s Vision 2030 lays great importance in capitalising the Kingdom’s strategic location to build its role as an integral driver of international trade connecting the continents of Africa, Asia and Europe. Vision 2030 aims at more than tripling the share of non-oil exports from Saudi Arabia from its current levels to reach 50% of its total exports. It aims at substantially raising the Kingdom’s global ranking to top 25 in Logistics Performance Index to ensure that Saudi Arabia becomes the regional leader in logistics.

Commenting on the signing of the agreement, His Excellency the Minister of Transport, Engineer Saleh bin Nasser Al-Jasser, said, “We are pleased today by the signing of this agreement, which will be a remarkable milestone in strengthening the Kingdom’s position regionally and globally and will contribute to transforming the Kingdom into a leading global center in the field of transportation and logistics services.” He added, “The authority’s new strategy supports the maritime transport journey in the Kingdom and enables the authority to continue developing a sustainable and prosperous maritime transport system that supports the Kingdom’s social and economic ambitions and contributes to achieving the ambitious goals of Vision 2030.”