Examining the grape sector from vine to shelf

Consumers looking for consistency and quality. The importance of post-harvest technology. How COVID affected the movement of grapes.

These are a few themes that emerged during Friday’s virtual Grape Quality Summit hosted by Hazel Technologies, Inc.

Changes in grape growing first touched on by Garland Perkins, senior manager for insights and innovation at Oppy. Perkins noted that the industry has seen a significant transition to new varieties bred for taste and size. “But some new varieties suffer from dry stems so that’s where our partnership with Hazel has really come into play. Because there is such demand for these varieties,” she said.

Perkins also notes that fruit is being packed later in the season and are featured in special retailer programs. “There’s been a big shift in the business over the last three to five years,” she said. “When we talk about shelf-life extension, with these programs, retailers have decreased the number of suppliers they deal with using the RFP process and through that, they’re able to hone in on their quality specs with those select suppliers. The varieties, the programs, packing later in the season, have all elevated the quality game.”

Supply chain
Of course, issues with the global supply chain were also noted. “We experienced port delays last season and it’s even worse this season,” said Perkins. As a result, she notes that sometimes there can be a discrepancy between when retailers commit to programs compared to how far in advance growers-shippers need to order packaging. “So we’ve had to order based on projections not necessarily confirmed programs. We’re ordering packaging in a different way than we have before. There’s a packaging shortage as well so we have to make sure that we have that on hand for the programs we do have committed,” she said.

Those logistics challenges tie back to post-harvest handling. “The main issue with some new varieties is dehydrated stems which is attributed to water loss from the stems. The process between harvest and putting fruit inside the box has to be done as quickly as possible to mitigate water loss,” Jose Monasterio, quality and post-harvest manager at Frusan says, noting there are different techniques employed to tackle this including using plastic covers in the field or humidifiers. “The cold chain is vital within the harvest process--80 to90 percent of its success depends on the cold chain process.” 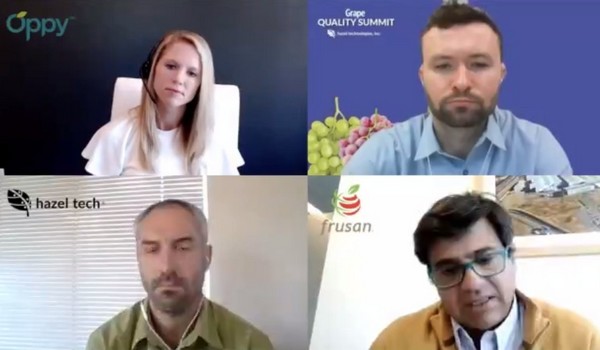 In turn, everything looks to be early this year. “California is ending earlier and the import season coming into the U.S. will happen earlier too,” Garland said. “We’re anticipating longer port delays, especially on the West. We think more fruit will be directed to the East and potentially trucked over to the West or looking at alternative ports.” In terms of projected import volumes, Peru is expected to be up over 10 percent in volume while Chile is expected to be flat.

With Monasterio, more talk moved into those proprietary varieties. “It used to be the varieties were a free for all for everybody. Today that’s no longer possible with genetics,” he says. “There are four or five genetic groups worldwide that are producing very good varieties of very good quality grapes.” However he adds that potential problems with new varieties may not be detected until two to five years post-planting making it a potentially expensive project. “The new varieties are cheaper to produce and it’s easier but they also have their own problems. There’s a variety that with a little bit of rain, they’re spoiled,” Monasterio said.

In the end, new varieties have to work for both the grower and the retailer. “It has to produce a healthy delicious product that customers will buy again and that the grower also makes money at the end,” Monasterio said. 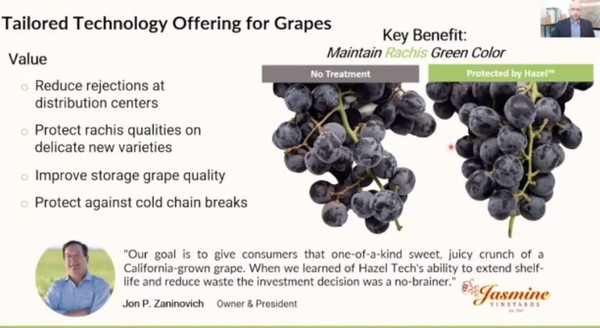 Consumer needs
Anél Botes, post-harvest researcher at South Africa’s ARC Infruitec-Nietvoorbij reiterated this, focusing on consumer needs. “Consumers want grapes that look fresh with good color,” she said. “If they grab some on the shelf, brown color for example can lead to consumer rejections and an increase in fruit waste.”

Botes said there are multiple strategies focusing on maintaining a fresh looking appearance--browning for example is associated with dehydration. “But trying to prevent water loss alone will not decrease browning,” she says, noting using applications such as 1- MCP to manage ethylene production helps maintain fresh looking fruit and minimizes waste.

Estefania Echeverria, head of Yentzen Research & Consulting at Portal Frutícola brought the discussion back around to some of the effects of the pandemic that growers and shippers worldwide are seeing today--and how they are in turn impacting those evolving consumer fruit buying trends.

Along with those aforementioned logistics issues, packaging of course has also been affected. “Plastic and cardboard raw materials are having a very significant shortage,” Echeverria said. She also notes that this collides with another trend emerging from consumers. “Consumers want much more sustainable packaging and there’s an increase in demand for material that is cardboard or organic and compostable. This has also generated a fairly significant price increase,” she said.

Echeverria also notes consumers are simultaneously buying more fruit online but at the same time, are concerned about the shelf life of their fruit. “Consumers realize there’s greater focus on shelf life and they’re valuing it. They’re also paying more attention to the country of origin for their fruit and they look at things like if the fruit is organic and if so, how are workers being treated?” she said.

What is needed is for grape growers and shippers to differentiate their product better and communicate those key information points to consumers. “Today’s consumers know more about what they are looking for and we have to encourage companies to take control of the information. Do not wait for the client to find information,” Echeverria said. “It’s better for us to deliver it than for them to find it by themselves because we also know that on the internet there’s a lot of true and false information.”

What proposes Echeverria then? “Differentiate yourself. Identify your growers strengths and promote them with good service to consumers. “If you maintain good communication, you’ll be able to understand a bit more about the end consumer.”