Collective “Save the fruit and vegetables of France”

The collective “Save the fruit and vegetables of France” has drawn up a report on the French orchard production. On the program: elimination of pesticides, Farm to Fork strategy, programmed end of phytosanitary products announced by the French president.

France continues to reduce its use of phytosanitary products on the territory with the upcoming tightening of the restrictions regarding their marketing. How will fruit producers then cope with the production losses and the competition from neighboring European countries? In view of these problems, the question of food autonomy in France arises, since 71% of the fruit consumed in the country today are actually imported. 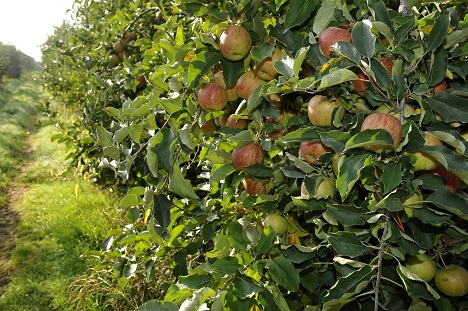 Growing restriction on phytosanitary products
The manoeuvering margin regarding the use of phytosanitary products is closing in for French fruit growers. According to the French General Directorate for Food, 40% of these uses in orchards are so-called “orphan” uses, in the sense that there are no other protection solutions against certain diseases.

Navigating the marketing authorizations is often too complicated and too constraining, so phytopharmaceutical companies end up no longer producing some of those substances.

The disappearance of certain products leads to difficulties for producers who can no longer fight against certain pests and suffer production losses. It is the case of the leafhopper or the peach leaf curl, for example, for which no solution exists today. Similar problem with the ban on dimethoate for cherries whose main affliction is the drosophila suzukii (Asian midge) that appeared in 2011/2012 and for which there is still no solution. For now, cherry producers still have access to Limidan, but the product could disappear by 2022/23, and the repeated use of the same product could also create some resistance.

Several answers to these problems are currently under study. “The cherry sector wants to propose a range of solutions to the producers that could solve this issue. But the risk would be to lose plots because of the costs and because some farms, especially those exposed to the wind, would not be able to use this type of protection,” explains Jean-Christophe Neyron. Other solutions are also being studied such as the use of insects.

“Research and experiments are being conducted on this issue. Sterile insects or predatory insects could potentially provide a solution but many questions remain, particularly regarding the financing of such projects, the effectiveness of releasing sterile insects requiring large quantities of individuals. The difficulty also lies in the protection level of the orchard since we are talking about a 40% efficacy at the most.”

According to Josselin Saint-Raymond, director of the French National Apple and Pear Association, “if we want to imagine the orchards of tomorrow, we will need varieties that are resistant to scab and tarp protections. And setting up an orchard that used to cost 40 to 50,000 euros [46,758 to 58,447 USD] will now cost 100 to 120,000 euros [116,895 to 140,274 USD], which is a 50% increase of the production costs due to the labor necessary to open and close the tarps depending on the weather. And if labor costs explode, apple prices will increase by 50 to 60% on the shelves in order to maintain the production on the territory.”

Pesticides and public debate: economic actors adapt to consumer demand
For political scientist Eddy Fougier, the context has been influenced by anti-pesticides since the 2000s. The issue of pesticides has become a public debate especially with the appearance of TV broadcasts. “The anti-pesticide vision has had an influence (artificial vs. natural..) and what is pushed forward is the claim that organic productions are cleaner than conventional ones. These actors have exploited a number of reflexes of the public when faced with risks. Many studies have been conducted since the 1970s and for the general public, the most anxiety-provoking risks are the ones that are invisible and not manageable. There is also the issue of perception by the general public of the notion of threshold and risk probability. In conditions where pesticides and other products of this type are accepted, it is necessary to take into account what is perceived as useful, and unfortunately the production costs, a question consumers only consider when the price of products goes up.”

“With the survey programs on the French public channels, the research on pesticides has exploded on the internet. This created a context in which politicians and economic actors such as large retailers try to adapt in order to be up to speed and so as not to be accused of being on the wrong side.”

Competitive situation regarding the European Farm to Fork strategy
French president Emmanuel Macron announced that he would, during the French presidency of the EU, make the elimination of pesticides a priority. But what about the gap between the tools available to French producers and the tools used by our European neighbors?

“We are in an open economic space, therefore in direct competition with foreign producers who have more tools and cheaper products than we do. Of the total of fruit consumed including exotic and citrus fruit, only 29% are grown in France.”

France is very quick to implement European measures, but it is not the case of other European countries like Spain, which has many other advantages including cheap labor. French fruit producers must also pay taxes on active ingredients that do not exist in other member states.

And while France was first global exporter in the early 2000s, exporting nearly 700,000 tons each year on international markets, the country now struggles to export 400,000 tons.

“Agro-ecological production does not interest global markets. Buyers are not interested in the production conditions, what they want to know is how many apples they can get for 1 dollar. Nowadays, 1.20 dollar will buy you 1 French apple, but 2 Italian or 4 Polish apples. It is an issue of price competitiveness. If a French apple is put in a container to feed the Chinese or Thai market, it will be damaged upon arrival because, without fungicide protection, fungi will develop during transport. So buyers are no longer willing to pay more for a French apple. They know there will be some loss and quality problems. We’ve lost between 200,000 and 300,000 tons in export for the French apple over the past 5 years, which represents 200 million euros [234 million USD]. This inevitably means bankruptcy for some producers,” explains Josselin Saint-Raymond.