World peach and nectarine production for 2021/22 is forecast to edge up slightly to 21.8 million MT

World peach and nectarine production for 2021/22 is forecast to edge up slightly to 21.8 million metric tons (tons) as China supplies recover from last year’s weather‐related losses, more than offsetting weather‐related losses in the European Union and Turkey. Exports are
projected lower as reduced shipments from China and Uzbekistan more than offset gains from the United States.

China production is expected to rebound from last year’s snow‐damaged crop, rising 1.0 million tons to 16.0 million. Despite higher supplies, exports are forecast down 23,000 tons to 55,000.
Coupled with weak demand from top market Vietnam, shipments to Kazakhstan have yet to recover despite the lifting of a ban on China stone fruits due to detection of quarantine pests.

After several years of growth, imports are also expected to ease to 36,000 tons as higher costs and quarantine requirements for cold‐chain products deter importers. 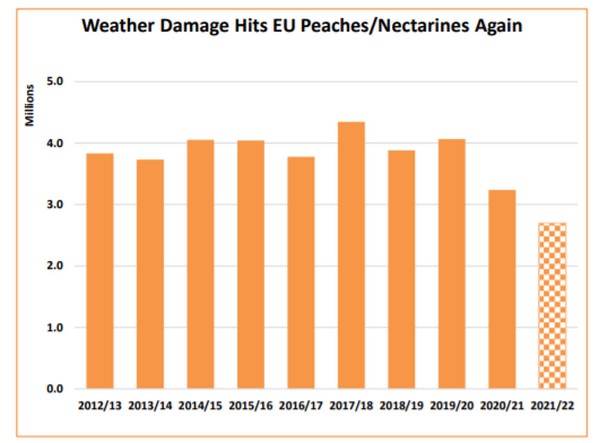 Reduced supplies are expected to prolong trends of lower exports and
higher imports, with exports down to 175,000 tons and imports up to
40,000.

U.S. production is projected up 60,000 tons to 716,000, holding fairly steady for the fourth straight year following consecutive years of
decline from 2010/11 through 2018/19. All main producer states are expected to show higher output with East Coast states recovering from last year’s freezes. USDA’s National Agricultural Statistics Service (NASS) surveyed industry and published the U.S. forecast for peach production in the August 2021 Crop Production report. Exports are forecast at 72,000 tons as improved supplies drive greater shipments to top markets Canada, Mexico, and Taiwan. Imports are projected up slightly to 33,000 tons on higher shipments from Chile at the start of the marketing year.