Not the fruit industry's first brush with hackers

To top an already taxing month, the operating system running all of South Africa’s container terminals were cyber-attacked early yesterday morning, again suspending operations with the exception of limited manual loading of reefers.

Today state-owned Transnet issued a statement that it has identified and isolated the source of "the disruption to its IT systems" (the South African Presidency yesterday referred to it as a "cyber attack").

The statement continues: "As part of efforts to support South African exports, manual port and rail operations continue. Transnet is prioritising the export of reefer containers, primarily through the Port of Durban. This as the citrus season nears its peak. Two export-bound vessels have started a loading cycle at Pier 2, while a third vessel is discharging imports at Pier 1, and will soon commence with the loading of reefer containers."

Transnet notes that since the start of the season in April, reefer container volumes are 12% higher than the same period last year.

"Satellite tracking from MarineTraffic shows a double-digit number of ships backing up at both Durban and Port Elizabeth, with the start of a queue also beginning to form outside Cape Town’s terminals," writes Splash247.com.

SA Trucker, a news outlet by truckers themselves, were yesterday told by port insiders of an alleged hacking while photos were leaking out of the welcome message left by the hackers on the computers of staff at Transport Port Terminals. 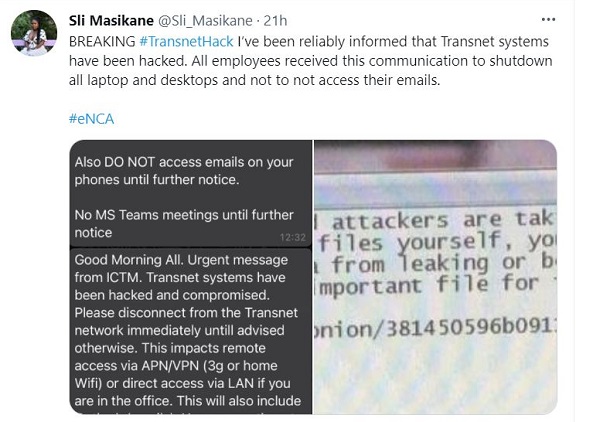 
Not the fruit industry's first brush with cyber attacks
A few hours later at a media briefing on developments since last week's mayhem, government admitted there had been a cyber attack which was being investigated. In response to whether it held a connection to last week's events, acting minister in the presidency Khumbudzo Ntshavheni said it was being treated "not as an unrelated event."

This is not the first time the South African export fruit industry has been affected by cyber attacks: two years ago the Perishable Products Export Control Board was hacked by an attacker whose identity remains undetermined. 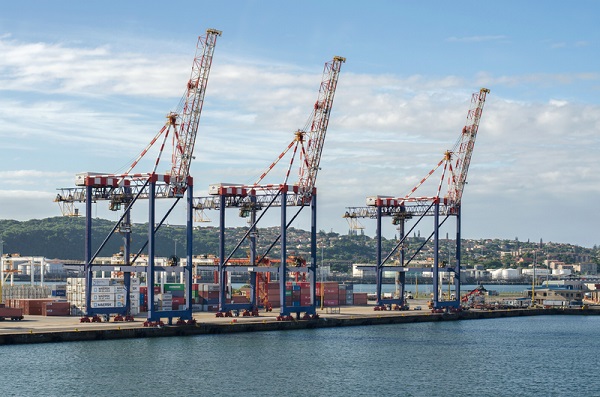 Coincidence: civil unrest last week, a cyber attack this week?
Just as activities were picking up after the mayhem of last week and the preceding weekend, the discharge, load and landside (gate in and gate out) operations across all ports in Durban, Port Elizabeth, Cape Town and East London have been suspended again, and the timing may not be coincidence.

On a 702/Cape Talk radio show a cyber security intelligence expert postulated that recent events in South Africa could have alerted the attention of hackers “looking for soft targets and figuring out how to take advantage of poorly managed environments.”

“We’ve seen a flourish of activity by cyber criminals and we were in the news for seven days,” said Jayson O’Reilly of Johannesburg-based cyber resilience consultancy AtVance Intellect. “That’s actually the kind of media attention cyber criminals look for.”

He noted that cyber criminals were looking at how they could bring down critical infrastructure, made possible by embedding technology into everything humans do. Ransomware was one of their favourite mechanisms.

It’s only their second year of storing citrus, and this year there is a sixfold increase in the amount of pallets it has received, mostly soft citrus but also grapefruit, lemons and Valencias, largely because of the disruptions in Durban. 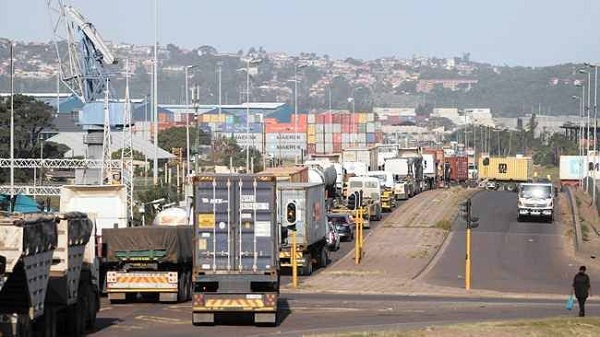 Congestion as trucks wait to enter the port of Durban

Citrus packhouses running short on trucks
A number of citrus packhouses in Limpopo and Mpumalanga had resumed loading for Durban, but have again called a halt. It is difficult to predict when the system will come online again.

“Logistics are very slow. We’re not getting nearly enough trucks back from the harbour to run our production at normal levels,” says a packhouse manager.