60% of total European cultivation of kohlrabi is located in Germany

It is considered typically German and nowhere in the world is it as popular as in that nation. Some 56,000* tons or 13.7 million tubers* of kohlrabi were harvested in Germany in 2020. 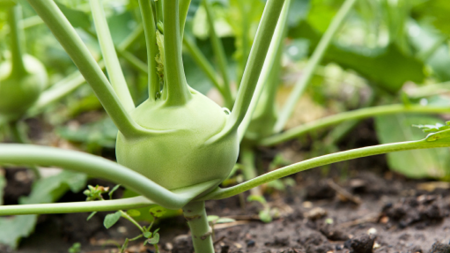 Crisp, round and bright green – kohlrabi. Germans cultivate this crop like no other country in Europe, and they have also taken the global lead in terms of consumption. Although kohlrabi is at least as popular in Asia as it is there, they have also won the race when it comes to adopting names. So, surprisingly, kohlrabi is called kohlrabi in English, kohlrabi in Bulgarian, koolrabi in Dutch, kol'rabi in Russian, Kōrurabi in Japanese, and kalrabbi in Swedish. Now in late spring, this particularly find is coming into the market.

Kohlrabi country Germany
Kohlrabi is grown all over Germany. In fact, about 60% of the total European cultivation area* is located in the Federal Republic. In spring it comes from protected cultivation, in summer and autumn – until the first frosty days – from the open field. Anyone who values an unadulterated kohlrabi aroma should take advantage of this time window to obtain regionally grown kohlrabi of the best quality. Because when it comes to kohlrabi, German growers are real experts. They pre-cultivate the vegetables, which are then successively planted out in plots. In the spring, this is done every three to four weeks, and later at two-week intervals. In this way, one plot is planted after the other so that fresh kohlrabi can be harvested every two months. Harvesting is done by hand, cutting off the tubers with a knife, but leaving the leaves on. And the best thing about it is that it comes from local farms to our kitchens in a short time.

The COLossal other cabbage
Kohlrabi, whose name is derived from the Latin word for "caulis" (cabbage) and "rapum" (turnip or root bulb), is something very special in the cabbage family. From the large leaf to the classic head shape – the sprouted tuber has little in common visually with the typical cabbage vegetable. What characterizes the kohlrabi is a strong tuber that develops from the thickened stem of the plant. The different varieties – around 50 are planted in this country – vary from spherical, platelike to oval and pale green to bluish purple. There is no difference in taste, and the flesh is white in all varieties.

Kohlrabi fact check
The kohlrabi is considered an original German vegetable – so German that its name has even been adopted into English, Japanese and Russian. It is not known where it originally came from. However, it is known that it first appeared in drawings in European herb books from the 16th century. However, it did not become established in German kitchens until the 19th century.

49,000 tons of kohlrabi were purchased in Germany by private households alone. Most of them in discount stores (49.2%).
Most kohlrabi fans live in North Rhine-Westphalia (23.6%), followed by the Northwest region (17.7%) and Bavaria (13.6%).
(Source: AMI analysis based on the GfK household panel).