Technology’s role in retail is multi-faceted

As part of PMA’s Global Retail Week, yesterday's session focusing on North America examined the evolving role of technology in retail and produce.

Anne-Marie Roerink of 210 Analytics started the session by sharing several trends on the rise in retail in North America including consumers interest in healthy living, interest in transparency and food safety, reinventing shopping and more. But she then honed in on key trends where technology continues to change how retail looks and operates.

Translating transparency
“Sixty percent of consumers want to know more about the story behind the product. And 50 percent hope to rewards brands and stories that align with their own values,” says Roerink. She says transparency is the “currency of trust” giving consumers a chance to look into the supply chain and in turn, letting brands tell the story of the product over just selling the product.

Technology has helped this transparency--it allows brands to communicate for instance whether products are greenhouse or field grown or whether they’re locally grown or imported. They’re doing it via technology such as incorporating QR codes or, as one example Roerink highlighted, a package design element that can be hovered over via phone to activate a video for consumers to watch on their phone. 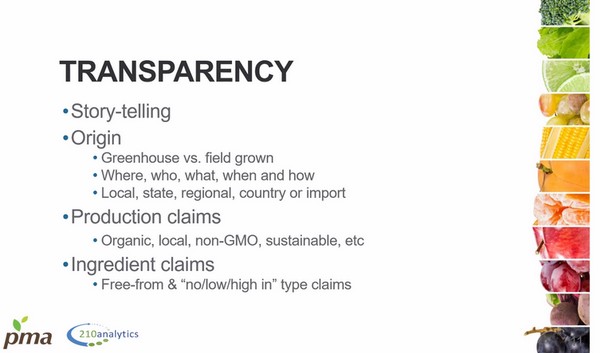 Sixty percent of consumers want to know more about the story behind the product.

Environmental sustainability
Roerink also noted that 60 percent of Americans enjoy doing something good for the planet, whether it’s recycling, working on limiting food waste and more. In turn, approximately 40 percent of shoppers also want to tie those values to their purchases.
Increasingly technology is being used to communicate the efforts that brands and retailers are taking to make sustainability gains. Given responsible sourcing is a significant growth areas for brands and retailers, they are being overt in how they communicate efforts around this.

Where we shop
“This is where we saw the most change driven by technology in the past few years, especially in 2020 driven by the pandemic,” Roerink says, noting the pandemic helped e-commerce and shopping jump several years ahead in its adoption rate. She adds that 10 percent of fruit and vegetables are now sold online.

“Technology is making produce more accessible by using vending machines, subscription services to deliver local or organic produce boxes, robot and drone delivery and more,” she says. Within stores, this also means the increasing implementation of self-checkouts or “frictionless commerce”--where consumers simply fill a cart with groceries and leave and the bill is taken care of via e-commerce.

Out of retail, efforts to make produce more accessible also continue via ideas such as Farmer Fridges in airports, convention centers which help bring fresh food to consumers.

Inspiring consumers
2020 taught consumers they could cook at home but as Roerink notes, 56 percent of people say they’re bored with what they’re making now. “The more variety we can get into people’s basket, the more they tend to cook at home and be engaged,” she says.

Technology such as QR codes, apps and websites are being used to educate and inspire consumers about food via bringing recipes to consumers as well as holding cooking demonstrations and more. 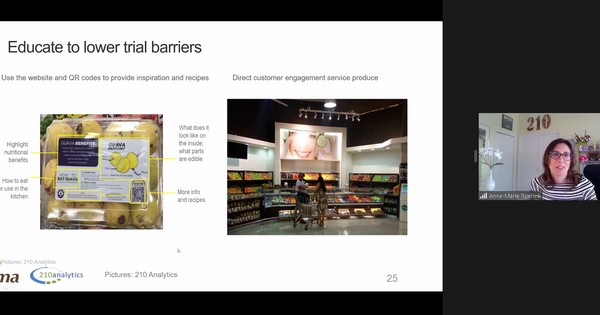 Communicating with consumers
Fliers and other communication methods have largely switched from paper formats to digital which increasingly lets retailers personalize offers. “It’s allowed us to work through technology to limit waste as well as managing production and labor,” says Roerink.

The session then moved to discussions around technology and, largely, using it to connect with consumers. As Tommy Caruana of Hazel Technologies reminded participants, people want to connect with farmers and growers. “That’s why farm stands and markets have taken off. If there’s a way for social media to fill that connection, there’s so much potential for growth,” he says, noting that once again that increasing interest in (often sustainably) packaged produce also gives opportunities to tell a brand’s story.