1.2Mt of potatoes in grower ownership at the end of March, almost matches the same time last year; just 2.6Kt more. However, it is 90.7Kt higher than the 5-year average.

The stocks figures however, do not account for potatoes held by packers, processor, merchant’s etc. and therefore only represents what is on-farm as at the end of March.

Regional changes
Scotland accounts for 33% (396.9Kt) of what remains in grower ownership at the end of March. This is up 29% on the same time last year. Throughout the season, movement from Scotland has been reported as “slow”. However, in successive weeks there has been an uptick in demand for Scottish Maris Piper, as supplies have been depleted in England. 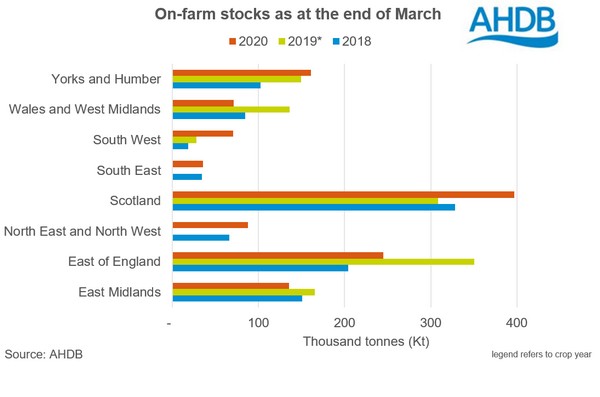 A partial reason for the higher stocks in Scotland, is a lack of seed sales, as over 70% of 2020 GB seed area was grown in Scotland. With domestic seed sales said to be slow earlier in the year, combined with an export ban to the EU since 1 January 2021, it is likely to add to higher stocks.

Another reason for high stocks in Scotland will be from the lack of demand regionally for packing material. Over 50% of the 2020 Scottish planted area was destined for the packing market. Demand for Whites has been reportedly lacklustre most of this marketing year which could again, have led to increased on-farm stocks.

The East of England and East Midlands account for 31.6% (380.1Kt) of potatoes in store as of the end-March 2021. However, total tonnage in these two regions is down by 136.2Kt from the same point last year.

In the South West and Yorkshire and Humber, on-farm tonnage is up 150% and 8% year-on-year, respectively. This is an extra 53.8Kt of potatoes in these regions combined, compared to the same time last year. For the South West, in part, this will be due to the demand impact from a lack of tourism.

Wales and West Midlands has seen the largest year-on-year reduction in percentage terms. Compared to last year, potatoes in grower’s storage are down 48%, at 71.1Kt. This region has also seen the greatest drawdown from January to March stocks in percentage terms, at 62%. Reasons for this are more than likely quality related, rather than demand. From the start of 2021 we have anecdotally heard of ongoing quality issues, with long-term storage not an option, meaning stock has been moved to market sooner. This movement does not necessarily mean to the intended market either and could include moves into stock feed.