The Peruvian blueberry season is over and now the market is mostly dominated by Chile. However, this South American country has a shortage of labor for the harvest and traders expect the volumes going to Europe to decline from week 7 onwards. Afterwards, the season will shift to countries around the Mediterranean, such as Spain and Morocco. Both countries expect to be on the market later than usual, which could potentially create a gap in the market. In North America, volumes threaten to accumulate on the East Coast, while shipments to the West Coast may be reduced due to logistical problems in the port of Los Angeles. In South Africa, volumes on the domestic market are now declining after prices collapsed due to a large supply of domestic blueberries. 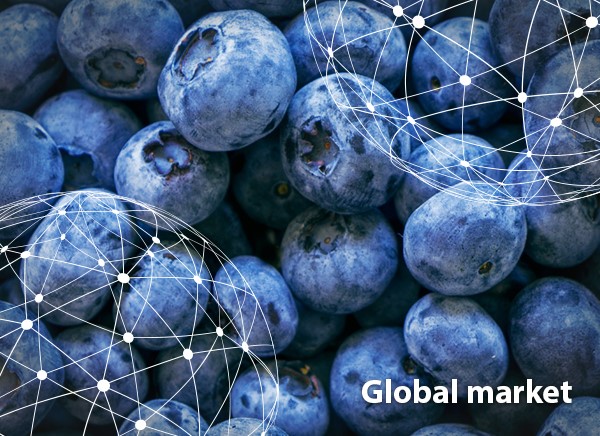 Netherlands: Turbulent blueberry market
According to a Dutch importer, the blueberry market is turbulent at the moment. "We're dealing with delays of many maritime shipments from Chile. Also, big promotions have been organized in Germany which are absorbing a lot of the supply, so the day trade is under pressure. This week is the last one with large shipments arriving from Chile; after that, the supply will rapidly decline. From week 6/7, 50% of the current volume will still be available. Chile is dealing with major labor shortage issues, which means that the fruit cannot always be picked on time. This is reflected in the quality of the arrivals, with many overripe and delicate berries. Chilean blueberry prices range between 5 and 5.50 Euro (bulk)."

"Morocco has started the season slowly. Due to the cold, this season has also been delayed somewhat. Consequently, prices are good, reaching about 9 Euro per kilo at the moment," says the importer. "In qualitative terms, we expect the Chilean season to be over from week 7, while Morocco will have good commercial volumes available from week 7/8, so there should be a nice transition between them."

Germany: Shortages and quality problems in the retail
The conditions in Germany's blueberry market are very difficult at the moment. Most of the volumes available right now come from Chile, where the coronavirus crisis has led to a shortage of harvest and packaging workers. “As a result, we are seeing clear shortages in the exports to Europe,” said a German importer. “Many volumes are picked too late, which makes them unsuitable for export to Europe, and they cannot be offered to the US, either. We also have problems with shipping freight in Rotterdam. It's not uncommon for our goods to arrive a week late, which is of course also detrimental to the quality of the product.”

The demand in the German retail, on the other hand, remains high. “The closure of the catering sector has obviously created a gap in the wholesale trade; however, this is more than offset by retail sales. We have been seeing this high demand for some time. The volumes arriving during the Chilean season are growing every year. This also applies to the demand, so there are no surpluses and the market situation remains broadly the same.”

Due to the above-mentioned problems, the Chilean season is ending a few weeks earlier. The last large batches are expected to arrive in the third week of February. Normally there is still plenty of Chilean supply available until well into March. "This means that we will switch to Moroccan and Spanish products much earlier than usual." The prices for Chilean blueberries currently stand at 6-8 Euro / kg, while those for the Spanish and Moroccan productions are expected to start at around 10 Euro / kg.

United Kingdom: Lower exports from Chile than expected
The blueberry season had a good start after an early end of the European one. This resulted in high prices in September and well into October, although the market came under some pressure towards the end of October and through November due to the large volumes exported by Peru. In December, the market started showing signs of recovery. So far, January has been quite a month, as Chile has not been exporting huge volumes as we had expected.

France: The demand is low
At the moment, Chile is the French market's main supplier. The quality and the volumes arriving are to the satisfaction of the French traders. After Chile, blueberries will arrive from neighboring Spain. However, the demand in the market itself is quite low at the moment.

Italy: Sales remain stable
A wholesaler in Northern Italy says that the conditions in the blueberry market are good, despite the lack of the catering channel. Confectioners and restaurants have always been large buyers of blueberries, but despite the closures due to the pandemic, there is no shortage of purchases. Chile is currently on the market, following some weeks when the main supplier was Peru. The product is imported by plane or ship and the wholesaler receives it already packed in 125 gram trays. The wholesaler sells "giant" type blueberries and the wholesale price in January fluctuated between 8 and 11 Euro / kg. The quality is good. After Chile, imports will start to arrive from North Africa, especially Morocco, and in late spring, it will be time for the Italian production, first in the south and then in central and northern Italy. In the spring and summer there is competition from the Polish production.

Spain: Possible gap in the market due to later harvest
Despite the pandemic and strict restrictions around the world, the demand for blueberries remains high. The sale of South American blueberries (Argentina, Chile and Peru) is going very well; however, the volumes seem to be smaller this year. The last shipments of Chilean blueberries will arrive in Europe between the first and the second week of February, even though the South American season normally ends in early March. Only some small volumes of Peruvian blueberries will arrive in the last weeks of February. For its part, Spain has had snowstorms and frost in early January that will delay the production. Morocco is also having a slow start this year; therefore, blueberry volumes are expected to be very limited between the last two weeks of February and the first two weeks of March. From that moment on, the Spanish volumes will gradually increase.

Poland: Very challenging season completed
In summer, Poland had frost affecting 30-40% of the early blueberry varieties. The demand was very slow at the start of the season, but gradually picked up. The price of Polish blueberries has been higher this year due to the weather and the pandemic. The production costs are higher than for most other fruits and, moreover, Poland had difficulties with the finding of laborers this year, as the pandemic made it difficult for workers from Ukraine to travel to work in Poland. Polish blueberries are sold all over the world, but European countries, as well as the Middle East and Asian countries, remain the main markets for them.

South Africa: More sales on the local market due to challenges in logistics
15,636 tons of South African blueberries were exported up until the end of 2020; more than in the 2019/2020 season, when 12,221 tons were shipped. The peak in exports was reached between week 41 and week 46. However, heavy rainfall and cold weather caused the harvest to be lower than initially expected. Due to a shortage of air freight capacity and delays in the logistics, many growers decided to sell their products on the local market, causing prices to plunge. The sector has set itself the goal of also exporting more blueberries by ship instead of by air, because the costs for the latter are very high and have kept increasing in 2020.

Last week, the price for blueberries on the domestic market stood at ZAR 100.47 (5.45 Euro) per kilo. Prices have now risen by 77% and reached ZAR 177.33 (9.46 Euro) per kilo because the supply is smaller. Most volumes for export go to the UK and the EU. The Middle East and Asia also remain important destinations.

United States: Port delays could make season challenging
The supply of blueberries in North America is smaller than normal, largely due to logistical problems. Most of the blueberries come from Chile, which started shipping at the beginning of the year. These mainly go to the East Coast. Mexican blueberries mainly end up on the West Coast. Chile is currently short of labor for the harvest. Moreover, Peru finished earlier than expected, and there are currently significant delays in the port of Los Angeles. Loads are sometimes delayed by a few days. The volumes are still available on the market. An importer on the East coast is partly concerned about these developments, because the volumes that are actually intended for the West Coast could end up on the East Coast, in turn generating more competition and an increase in the supply.

The demand on the market is stable at the moment, but the supply is increasingly smaller. Consumers are also showing more interest in larger packaging formats. Over the past two weeks, the price has continued to increase, which is good for the growers in Mexico and Chile. The Chilean supply should continue to be at its peak until March.

China: Growing production and market potential
The quality at the beginning of the Chilean blueberry season was not that good. With the growth of the market, more and more exporters see potential in the Chinese market and are starting to enter it. But some new exporters are not familiar with the trends in the Chinese market and don't know what kind of fruit the local customers want. Some ship products of unsuitable quality en masse. The purchasing power to buy expensive imported fruit is generally lower due to the coronavirus. Sales this year are not going as well as in previous years, partly because of the fear to viruses.

Australia: Peak sales
The blueberry season in Australia is currently in full swing and prices in stores have increased. Last year, 19,000 tons of blueberries were grown; an increase of 13% in terms of volume. The value increased by 10% to AUD 338.7 million (Euro 212.7 million).

New Zealand: Increasing consumption of blueberries
Statistics published in December showed that New Zealanders consumed a record 8 million cups of blueberries worth more than NZD 30 million (17.6 million Euro) last season. That's an increase of 1.1 million punnets (+15.2%). The trade association of blueberry growers in New Zealand expects sales to increase even further this summer due to the corona crisis. 60% of the blueberries are exported to Australia and Asia.