Ecuador has been doing relatively well when it comes to banana exports. Although the second half of 2020 quantities have dropped compared to last year, the first half of the season saw an increase in exports of both conventional and organic bananas. Naturally, the statement made by Aldi regarding lower prices worries the producers, as the costs of growing bananas in a sustainable way mean they can’t carry this drop in price on their own.

Max Coello works for the Commercial Office of Ecuador in Milan and has seen a growing number of exports of Ecuadorian bananas to European countries like Greece: “Ecuador has been growing constantly in relation to the exportations of bananas to Greece since 2015. During 2020, comparing the banana exports from January to October, the volumes exported from Ecuador to Greece have increased. The export of bananas in general has increased by 9%, and in relation to organic bananas, the increase was around 5%. After the world can leave the pandemic behind it, the export of organic bananas should start rising to higher rates again to the 42% average level of 2018 and 2019. During last year, the total amount of bananas imported in Greece from Ecuador was 178,245 tons.” 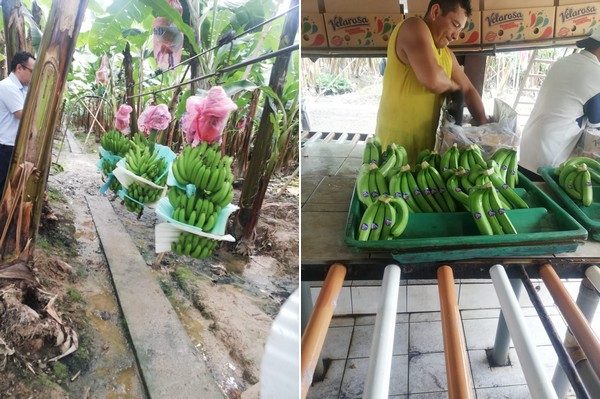 Demand for the first half of 2020 was quote solid, despite the challenges the coronavirus brought with it. The higher demand did increase prices in certain markets, but other markets, like the Greek one saw a slight decrease in the price, Coello explains. “The Covid situation has influenced the increase of banana purchases during the first semester in all Europe, including Greece, but during the second semester, the quantities have fallen in comparison with the 2019 season. As there has been more demand in the world for bananas overall, prices have been also showed increases in some markets, but there were decreases in others such as the Greek market. In Greece, the reduction has been very low, around 1% in relation to CIF prices. Ever since 2014, there has been a constant tendency of prices slightly going down, but we would like to believe that this tendency will reach its lowest point for next year.”

When Aldi stated they were going to pay less money for the bananas, it shocked the Latin American banana producers. According to Coello, the sustainable cultivation of bananas brings costs with it, and growers will not be able to carry this drop in prices on their own.

"My personal opinion is that the situation with this statement from Aldi is complicated, as it affects the producers in each single country directly, and endangers to lower the general prices by other clients in all of Europe. The producers from all over the world have complained, reinforcing the fact that producing in a sustainable way comes with certain costs, and it’s simply not possible for the producers to take this hit in prices alone. Now, there is still time to see what will happen next year, but we certainly hope that this measure by Aldi will be reconsidered. I also believe that other clients will not take a part of this, understanding the damage that will be caused to the banana producers.”

For the future, Coello hopes the growth of Ecuadorian banana exports will continue, albeit hopefully a little faster than it has grown over the past two years. “The perspective for the future during 2021 is a stabilizing or maybe even a little increase on demand. Since 2018 we have faced a rather slow growth on the market, where in years prior to 2018 the demand increased steadily. It seems this tendency of slow growth will also extend to the future. However if we look at total exports of bananas from Ecuador, the year 2020 has been great. Ecuador exported more than 315 million boxes of bananas from January to October of this year, a volume that represents a growth of 7.24% compared to the same period in 2019 and this means a new sales record for the country. The importers from all over the world recognize the quality and longevity after harvest of the Ecuadorian bananas, and that will be always a plus, despite the price variations.” Coello concludes.