The European Union buys more tomatoes from Morocco than from Almeria

Morocco, whose production schedule is very similar to that of Spain, is the latter's main competitor in terms of tomato production and marketing in the European Union. In fact, it has increased its sales by 18% over the last 4 campaigns, while Almería has seen them reduced by 25%. According to ICEX data, Moroccan fresh tomato exports to the European Union (424,000 t) from September 2019 to August 2020 are greater than those of Almeria within the same period (371,000 t). We have seen constant declines in recent campaigns.

As a consequence, the value of Moroccan fresh tomato sales to the European Union has been 14% higher than that achieved by Almeria, with the former reaching € 524 million, compared to the latter's € 452 million. If we look at the average price per unit last season, we see that the kilo of Moroccan fresh tomatoes was sold to Europe for € 1.24 / kg, while that of Almeria reached € 1.07 / kg.

It should be noted that around 27.1% of the protected horticultural area in Andalusia corresponds to tomato cultivation, with over 10,300 hectares and a production of around 936,000 tons.

According to data managed by the Council of Agriculture, strong growth has been observed in Morocco, which has gone from about 9,000 hectares in 2001 (when this country started to enjoy favorable conditions for trade with EU markets) to roughly 24,000 last year. This time, the acreage is expected to be expanded to 26,000 hectares (a large part of them belonging to European investors and producers). 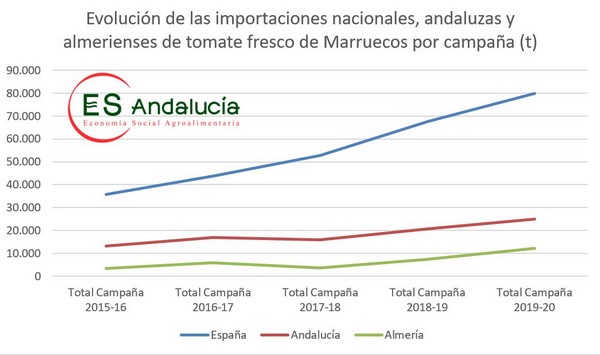 At ES Andalucía, we urge the regional government to fulfill its commitment to monitoring the fraudulent labeling of products that are sold as if they were of Spanish origin.

The Organization of Entities of the Social Agro-food Economy of Andalusia, ES Andalusia, looks after the interests of its associates and is involved in the promotion of exports and internationalization as a way to improve the value of the product and the entire value chain. At ES Andalucía, we are constantly in touch with official institutions to promote initiatives aimed at the social, labor and economic improvement of the associates, offering also advice linked to developments in the various agri-food sectors. 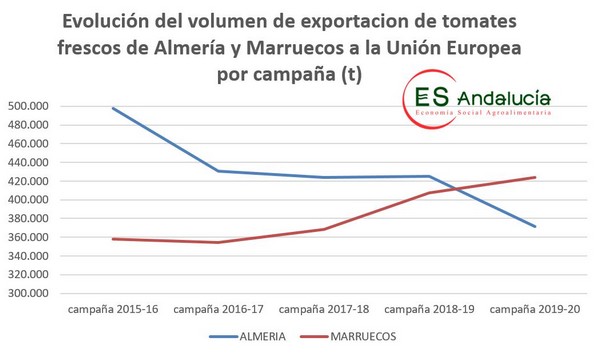