The eruption of Ecuador’s Sangay volcano resulted in an enormous amount of ash being spewed into the air and being scattered by the wind across 55,000 hectares of banana farms. “The main affected territories are Guayas and Los Rios,” says Juan Jose Pons, the coordinator of Ecuador’s banana cluster. “The ashes are affecting the bananas in the trees and the workers.” 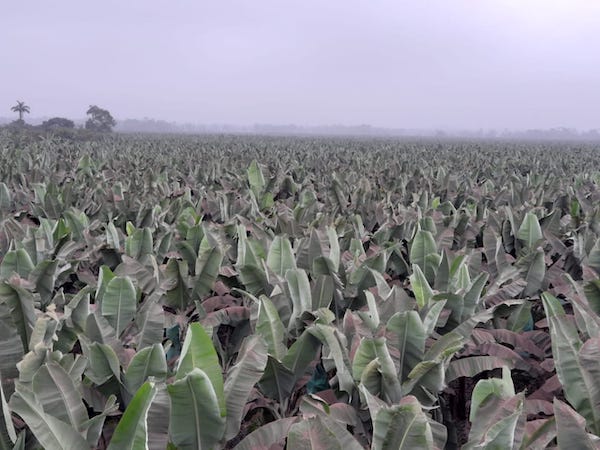 Worker safety is top priority
The ashes are no longer raining down, but since the banana plants are covered in them, the workers who are harvesting the bananas are still seeing the effects. “The top priority in this situation is to protect the workers. This is done by providing protective glasses, masks, and long-sleeved attire. Fortunately, the ash itself isn’t dangerous, it’s just like dust, so these protective measures are enough, but we still need to ensure that all workers have access to the protective equipment,” Pons explains.

Effects to be felt 8-12 weeks from now
The unharvested bananas are covered in plastic bags for protection, which can afford a good amount of protection – unless the bags have small pinholes in them. “The growers who have the pinhole bags are seeing the ashes get through and affecting their bananas. The solid bags are protecting the bananas much better,” says Pons. This makes it difficult to provide a good estimation of the overall damage, because the type of bag used by the growers has a major effect on the amount of damage that grower sees.

When the ash does get into the bags, it affects the stems of the bananas and causes cosmetic issues that make them unsuitable for exports. “If the ash gets into the bag, it affects the top hands and gets into the fingers of the banana bunch. This reduces the ratio of fruit per box, because you lose the top hand of the bunch. These bananas don’t have to be thrown out, but they will likely go into the domestic market for very low prices,” Pons explains.

Lower banana volumes coming out of Ecuador
Even before the volcanic ashes affected the banana volumes out of Ecuador, the producers were already at the low end of their production cycle. “This is normal for this time of year, though the low end this year is lower than it has been in previous years because of the pandemic. The very low spot market prices, in addition to payment delays, have created problems for producers. This means that there’s less money to invest in the plantation to keep up with the productivity of the farm, which has caused a decrease in overall volumes,” Pons shares.

Due to the losses in exportable banana volumes from the ashes, the overall volumes are even lower now, which has affected the pricing in the market. “For us, our export prices have gone up and are now at the level of the official price – which really is a quite dramatic increase, due to the lower volumes of fruit. But how this will affect the end consumer isn’t clear yet, especially since there are extra supplies coming out of Guatemala, Colombia, and Costa Rica which are going to the Mediterranean, particularly,” Pons concludes.