This week, the situation in the North-western European market is difficult for melons due to the lack of summer weather. This, together with the strong production in the Mediterranean region, has been putting some slight pressure on prices. Spain, in particular, dominates the market and is selling normal volumes in Europe, despite having recorded a couple of hail storms. Meanwhile, countries such as Greece and Turkey have been able to significantly increase their exports to Europe. Prices in China are also under pressure due to the supply from the south of the country. In North America, there are shortages here and there, especially of Cantaloupe and Honeydew melons, but this is not resulting in higher prices because the demand is also disappointing. Florida has finished earlier this year and the production is now shifting mainly to Georgia and California. The latter expects a slightly greater volume than last year. 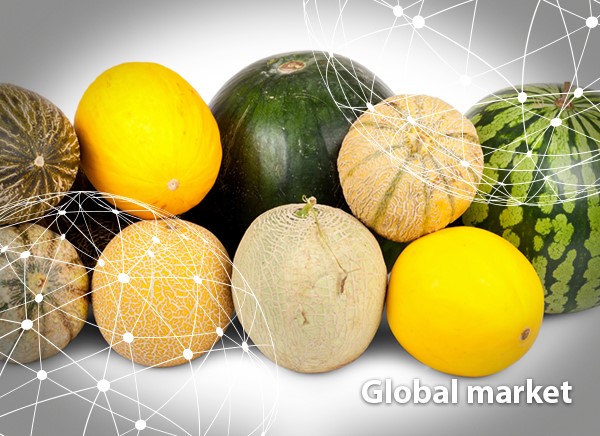 Netherlands: Melon prices fall once again
The Spanish melon season started this year with high prices and Dutch importers suggested that growers from the early melon region of Almeria might have the best season in years. Last week, the hailstorms in the early cultivation areas of Murcia contributed to strengthening this belief, but the damage turned out to be mainly a local affair. "Now that Murcia is supplying normal volumes to the European market and the weather is no longer ideal, melon prices are quickly falling to the low levels that have unfortunately become the norm in recent years," says an importer. "Since other Mediterranean areas are also supplying large volumes, there is a considerable pressure on prices. Consumption is certainly not at the level we would like to see at the moment; we really need summer weather for that.”

Belgium: Oversupply due to bad weather
The supply of melons on the Belgian market has been huge for weeks, says a Belgian importer. Due to the unstable weather conditions, consumption has dropped considerably, which means that there is currently some oversupply. The Spanish melon season got off to a good start and prices were also good in the beginning, but these have now fallen considerably.

Germany: Spain alone at the top
In the German melon market, Spain is currently the only singing voice. Moroccan watermelons gradually disappeared from the market around week 20-21, replaced by the Turkish Dumara. The first Greek batches then became available around Ascension; however, the supply from Turkey and Greece cannot be compared to the volumes imported from Spain, says a trader. A good demand and fairly stable price levels are currently being reported.

The other melon varieties (Cantaloupe, Charentais, Yellow melon, etc.) are also mainly supplied by Spain. "In terms of demand, we see that yellow melons stand out slightly," says a trader. There is also supply from Turkey, although of varieties that are not grown elsewhere. This is the case, for example, of the Kirkagac variety. "We see that this variety is gradually gaining ground in Germany," said a trader with Turkish roots.

France: Traders are optimistic about this season
The French melon season is in full swing. There is still some Spanish fruit available. Currently, the supply exceeds the demand, but traders are optimistic. "The European stone fruit volumes are limited. The melon acreage has also been reduced somewhat. These two factors should keep the market in balance."

Spain: Damage to production due to heavy hailstorms
This year, the acreage devoted to Piel de Sapo melons in Spain has been reduced by about 10%. Meanwhile, that of the Charentais, Galia, Yellow and Cantaloupe melons, which are more export oriented, has been reduced by around 5% due to the low prices in the previous season. For watermelons, there is also a 10% reduction at a national level.

Almería is almost finished with the greenhouse melons and watermelons with good prices for the melons and very high prices for the watermelons due to a shortage of good quality watermelons and high demand in Europe. Now Murcia has started harvesting in the open ground and production will be in full swing within a week. This season, the acreage devoted to melon cultivation in the region of Murcia stands at around 5,600 hectares, while watermelons are grown on around 3,100 hectares. Last week, there was heavy rainfall and hailstorms in Murcia that damaged around 10,000 tons of melons and watermelons, resulting in a lower supply from the region.

The supply of green melons is adequate to meet the demand at the domestic level. It will not be affected by the hail damage. When it comes to the Charentais, sizes are smaller than in other varieties. The fruit setting did not go as expected in May.

As for watermelons, hail damage has been recorded in the regions of Lorca and Campo de Cartagena, which will lead to a slight reduction of the supply in June. The quality and taste of Murcian melons are very good in all varieties and sizes. The region of Valencia is starting with the melon harvest within a few weeks; then it will be the turn of Castile La-Mancha, where the fruit is harvested from late July to October. The latter region expects its production to drop by 20% this year.

North-Italy:
A wholesaler says that melon sales fell sharply from June 7 to 10. Things had gone well in May with the early production. A grower with 200 hectares of melons and watermelons says that there has been some overlap between the greenhouse and the open ground productions. Consumption is not high (due to bad weather and low temperatures), which means low prices.

Sardinia:
A fruit and vegetable organization says that “after a good start in the last few weeks, with surprising prices and demand, the last 10 days have been marked by a sharp drop of consumption and prices. This is due to the rainfall and temperatures, which have fallen below the average levels in both Italy and abroad. The price of watermelons has dropped by 40%, while that of melons has been reduced by up to 60%.”

Basilicata:
A growers organization has started harvesting Cantaloupe melons this week, and for the first time, these melons are being exported by the organization itself to Switzerland, Germany and Austria. The harvest of the Yellow melons will follow from mid-July. The price of the Cantaloupe has dropped in two weeks from 1.80-2.00 € / kg to 0.80-1.00 € / kg.

Sicily:
In terms of production, it has so far been a good season for mini-watermelons, watermelons and Yellow melons; however, there is a shortage of tourists and the catering industry is restarting its activities at a slow pace. The weather conditions are also unstable. This year, the mini-watermelons arrived around May 10. Prices seemed good from the start, with 0.70-0.80 Euro / kg, but this trend could not be sustained due to the arrival of stone fruit on the market. Prices now oscillate between 0.20 and 0.25 € / kg. The watermelon harvest also started in mid-May. Again, prices were satisfactory at the start, with 0.60-0.70 € / kg, but now they don't exceed 0.25-0.30 € / kg. Watermelon sales have fallen by 50% this year compared to the previous one. The Yellow melon season started in early June with prices ranging between 0.60 and 0.80 € / kg; now, however, they don't exceed 0.50 € / kg.

Greece: Bad start, but exports recovered
The start of the watermelon season was considerably disrupted by the coronavirus; however, the market was still able to recover. Greece managed to double its watermelon exports in April compared to the previous year. More than 44,000 tons have been exported recently, with the main destinations being Germany, Poland and Italy.

Turkey: Exports will quadruple this year
Unlike in neighboring Greece, the export season has had a good start. Between April 25 and May 20, 4,000 tons of watermelons were shipped, which is four times more than in the same period last year. Exporters are happy with the higher demand in Europe. The export value of the melons has also increased compared to last year.

China: Low watermelon prices due to surplus in the south
Watermelon sales are good at the moment. The watermelon supply from Shanxi Jiangsu, Sichuan, Hunan, Hubei and other regions has been reaching significant figures in early June. In general, market prices have remained very low since May, but over the past two weeks, they have gradually increased. The oversupply and the bad weather in the south were the main reasons for those bad prices. The Meidu and 8424 varieties are the most common on the domestic market and are also popular in Southeast Asia. Yellow watermelon is also increasingly better known to consumers; however, the production remains small.

North America: Watermelon supply growing, while that of Cantaloupe and Honeydew melons continues to fall
At the moment, there is a smaller volume available on the US market; however, that volume is expected to grow in the coming weeks. In Florida, melons have been subject to extreme heat and stormy weather, which has hindered the harvest and also taken a toll on the quality of the melons. The season started and ended earlier this year. It is now mainly Georgia where volumes are increasing. In Canada, the volumes on the market are smaller than those of the same period last year. Many of the melons come from the East Coast of the US, with the supply slowly moving north. In California, larger volumes are expected this year; not much higher, but still greater. The demand for the watermelons is good, but it depends on the region. In Canada, the demand is less strong due to the impact of the country's measures against the coronavirus. A lot of the melons are usually intended for the catering industry. The demand is good in Florida due to the warm weather and prices are around 30% higher than normal.

Meanwhile, the situation of the Cantaloupe and Honeydew is completely different. At the moment, the volumes are very small. The Cantaloupe is currently supplied mainly by Imperial Valley (CA) and Yuma (Arizona), while the Honeydew comes from Mexico via Arizona. However, the demand is moderate. "The price for the Cantaloupe would normally amount to around $ 12.95- $ 13, or even around $ 15 with small volumes, but the price now stands at around $ 10.95- $ 12.95, depending on the size," said a trader. The price for the Honeydew amounts to around $ 8-10. In the coming weeks, the volumes are expected to be further reduced.

Mexico: Smaller volume
This year's watermelon production is smaller than last year's. The season is also usually almost over at this time and things will only pick up again after the end of the summer. The lower production in Mexico has led to the market conditions being good in the US, with domestic melons now hitting the market with good prices. Mexican watermelon prices have reached above average levels this year, with an increase of almost 40%.

Australia: Slight reduction in the volume, while exports are up
The total volume of Australian melons had fallen by 6% in 2019 compared to the 2018 season; however, in the same period, exports increased by 6%, to 21,455 tons. Australian melons are available all year round. Most of the production consists of watermelons.