South Africa: Pace of loading at ports expected to pick up

At the ports of Durban and Cape Town, Transnet has announced it would relax staffing constraints, so it is expected that the pace of loading will pick up within the coming weeks. An additional vessel has been added to the berthing line-up at those two harbours. 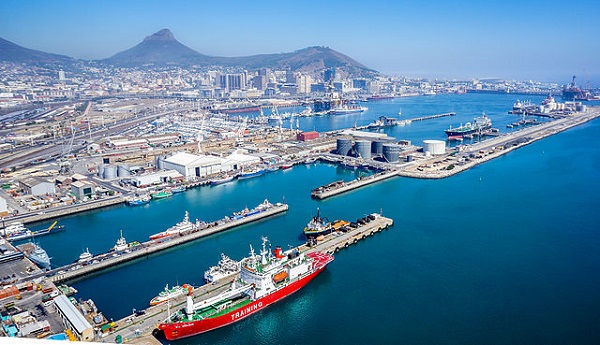 Some things never change though – despite the lockdown that has seen the closure of the Durban automotive terminal, Bayhead Road, the notorious entry road into the container terminal, is clogged as usual as a result of delays in port.

Fewer empty trucks heading back north
However, due to a drop in imports to South Africa and restrictions on the transport of non-essential items, there are fewer empty trucks moving from Durban to Gauteng, and there could likely develop a shortage of trucks within the next week or so, the Citrus Growers’ Association has advised its members. ”As we understand, the production of grapefruit will now escalate [and] as of the coming week packhouses may experience transport issues.”

“From a shipping point of view it’s a nightmare,” says a shipper, noting it’s much the same as last year in terms of some harbours being bypassed, “but at least our ports are still open.”

Most staff at freight forwarders are working from home, or in shifts, going to the office to print out documents as needed and deliver to courier agencies.

DALRRD inspection sites unchanged
Recently FreshPlaza reported how PPECB inspectors are forced to sleep in their cars in front of police stations. Inspectors from the Department of Agriculture, Land Reform and Rural Development (DALRRD) are working at skeleton level to reduce exposure but also in response to lower levels of exports and imports.

There have been reports of centralising of DALRRD inspection sites, but the department confirms that all approved inspection sites are still visited, while officials try to make only day visits given the lack of overnight accommodation.

Exporters have been telling fruit growers to store fruit, instead of rushing to market.

Restricted trade due to coronavrus regulations coming into force in both East and West Africa will have a significant impact on trade in Goldens and red apples within the region.

Yesterday the Citrus Growers' Association noted in its daily Covid-19 memo that they have been in contact with citrus and other commodity organisation elsewhere.

"The fences have been dropped and we are all fighting this together," Justin Chadwick, the CGA CEO, wrote.

Unhappiness with Labour Dept
There has been unhappiness with unannounced visits by officials from the Department of Labour, putting farm enterprises, obliged to show visitors away, in a difficult position. In fact, not even exporters are currently allowed into packhouses and growers' associations have advised their members not to accept unannounced visitors.

Furthermore, some of these officials have reportedly insisted on face masks that meet very specific manufacturing requirements, which isn't helpful in a time of mask shortages when home-sewn masks would also provide protection.

Truck drivers: difficulty finding food along the road
In the transport industry drivers are pulled off less than at the start of the lockdown, now that a permit system, carried by the drivers, has been worked out with the authorities. Truck drivers complain that it is difficult to find food along the road now, as many fast food restaurants have been forced to close.

Panic buying during the days running up to lockdown led to a great increase in demand for transport.

“The week before the lockdown it was a madhouse and the first week of lockdown was crazy again, when stores had to replenish their empty shelves,” says a source in the refrigerated transport industry.

“For the rest everything is going on as normal. It’s surprising, actually. It’s just that things are very changeable, it’s very difficult to plan.”