Many vessels delayed in berthing due to lockdown

"The situation at the harbours is very, very bad at the moment and if it continues like this over 21 days we’re going to have a very big problem on our hands,” says Mitchell Brooke, logistics manager at the Citrus Growers’ Association, about the skeletal staffing at South Africa’s harbours that have reduced berthing by over two-thirds.

“Terminals have reduced their berthing to 30% and there are 21 vessels outside Durban, Port Elizabeth and Cape Town, just waiting for a berth. It’s a serious worry for us.” 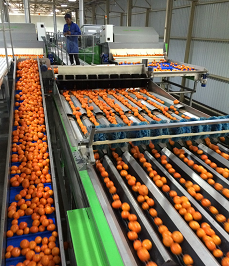 The association is currently working with government to at least increase that by one additional berth at Durban, Port Elizabeth and Cape Town each, but due to the high-risk factors, like HIV and turberculosis, among some staff members, the authorities are not amenable to allow more staff on-site during the Covid-19 lockdown period.

Mitchell notes that reports of current staffing levels at other ports around the world suggest that South Africa has the lowest capacity in the world at the moment.

“We might have a really tough season if it continues like this which is sad because we have a really good crop, the markets are looking good, pricing is outstanding and people are trying to rush to markets and now they can’t. We have suggested to growers that they taper down their harvesting for now, because there’s no point flooding the cargo into the ports if you can’t export it because of limited berthing.”

“When vessels do call at the terminal," he continues, “we propose to our members to move cargo wherever they can to find the vessel that’s leaving South Africa first from the last port of call. In the case of Europe you would send cargo down to Cape Town and in the event of the Far East and Middle East send it down to Durban to at least get the last vessel out and get them to markets quickly.”

Two substitute cranes arrive at PE
On the bright side, the association is relieved at the arrival yesterday of two mobile harbour cranes at Port Elizabeth, coming from Liebherr in Germany. These cranes will be used while two shore cranes undergo refurbishment, which is expected to take a year, whereafter the substitute cranes will move on to the Cape Town Multi-purpose Terminal, their original destination.

Last year Transnet was considering decommissioning the Port Elizabeth container terminal, which would have put massive strain on the Ngqura Harbour given citrus growth over the coming years.

Government was convinced by the Citrus Growers' Association’s proposal to keep the PE container terminal open, important from a strategic point of view, even though it’s only in use during the citrus season.

The association recognises the high cost of the operation and maintenance of the berth but, says Mitchell, because of increased volumes from the Eastern Cape it would have put the Ngqura terminal under so much pressure that it would have congested the whole region’s supply chain.