'Supplies of pears from overseas gained in importance'

The supply of pears from overseas has gained in importance: in addition to Bon Chretien and Rosemarie, Cheeky came in from South Africa as well, and their presence expanded noticeably. Flamingo has so far only arrived in Hamburg. Argentina sent over their Williams Christ. Chile participated with Carmen, which cost €21,- per 10 kg box in Frankfurt, as well as with club Dean's pears, for which one had to pay €25,- per 10 kg. The Chilean Abate Fetel also appeared here and there.

The imports from the southern hemisphere were not always very convincing regarding their organoleptic characteristics. But even if they did leave nothing to be desired in this respect, the demand was still not very strong. In fact, European products were able to score with their lower prices, rarely showing any qualitative shortcomings. In this sector, Italian Abate Fetel, Santa Maria and Williams Christ formed the basis of the range. Conference from the Netherlands and Belgium and Santa Maria from Turkey complemented the range with small volumes. Overall, the demand was met without difficulty. As a result, the prices did not change significantly. In Cologne, the Italian batches became more expensive due to the increase in supply. 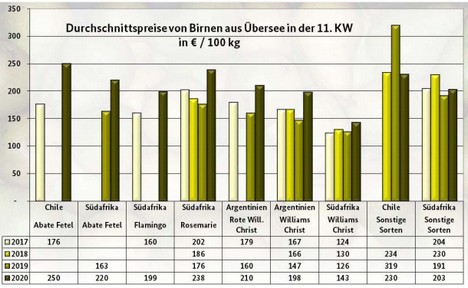 Apples
The sales options were limited locally for apples, as there were fewer customers on the market. However, the traders had little reason to modify their previous prices.

Table grapes
South African Thompson Seedless and Crimson Seedless dominated the scene. The demand was not very strong and the customers sometimes focused on light, sometimes on dark berries.

Lemons
Spanish Primofiori predominated in the market. Turkish shipments only took part events here and there. The demand itself was quite alright.

Bananas
On the one hand, the demand was quite low due to the weather and holidays. On the other hand, sales improved a little.

Cauliflower
There was a friendly demand overall. In view of the reduced availability and the increased purchase prices, there were price increases; some of them quite substantial.

Lettuce
Lettuce originated in Belgium and Italy. Italian goods were sought in vain. All in all, the Belgian arrivals expanded. However, as the products had a rather small diameter, the prices dropped successively.

Cucumbers
Depending on the market, the Netherlands, Belgium or Spain dominated events here. In general, the demand was not particularly strong however, which initiated discounts.

Tomatoes
As usual, the offer was broadly diversified. Trade however, was uneven. On the one hand, there were discounts due to a weak demand and on the other hand, there were price increases due to restricted unloading of goods.

Sweet peppers
Spanish deliveries dominated over Turkish deliveries. The demand  was quite nice and it could be satisfied without any difficulties.