While much has been made of the improved water prospects for Cape Town, fruit producers note that, west of the Bot River, the situation looks starkly different.

Agri Western Cape yesterday released a statement to point out that the past winter rainfall season, which has practically finished, was below average and still leaves the province in a water-insecure position. 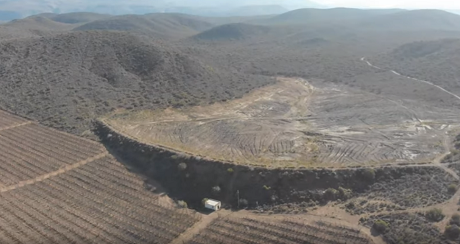 The Hartmansleegte Dam in the Klein-Karoo which last held any water three years ago (photo: Hortgro)

Jannie Strydom, chief executive of Agri Western Cape, says that the coming season will again be a difficult one as some irrigation dams are only filled to 50% or less of capacity. The Brandvlei Dam stands at 53.8%, the Keerom Dam that serves the Koo and Nuy Valleys is 16.7%, the Poortjieskloof Dam near Montagu in the Klein-Karoo, important stone fruit area, is completely empty for all intents and purposes (0.2%).

"Nobody should think the Western Cape is out of trouble after the 2019 rain season," he emphasises.

Former stone fruit farms abandoned
Nowhere is the situation more acute than in the Klein-Karoo, as FreshPlaza has reported before. The extent of the impact of consecutive years of drought has been highlighted by Hortgro, the top- and stone fruit umbrella body, which estimates that R30 million (1.8 million euros) in wages will be withheld from producers and farm workers due to low yields and reduced export packouts.

Agriculture is the main economic activity in this area.

There are previously productive stone fruit farms where every single tree has died and all farm workers have lost their livelihoods. More than 300ha of orchards have been taken out.

Fruit producers get no government subsidies in South Africa, nor has the area been proclaimed a disaster area which would enable emergency government aid.

In a poignant Hortgro report on the Klein-Karoo drought (in Afrikaans), a former stone fruit producer says that where before various trucks were needed to supply their packing material, this past season the harvest was so meagre that all of their required packing material fitted in a small pick-up truck (bakkie).

Hortgro has produced a video showing an aerial view of the devastation wrought by the drought on the Klein-Karoo's once-flourishing stone fruit orchards.