Australia is in the process of revolutionising its barcode system

GS1 Australia is in the process of revolutionising its barcode system, providing more information and traceability, regarding the identity of loose produce items.

Account Director, Andrew Steele told the Hort Connections conference that the project has been in work for two years now, and is in the implementation stage. Driven by Woolworths and Coles supermarkets, he says retailers have been working with suppliers to implement the GS1 data bar, where the Global Trade Item Number (GTIN) is linked back to the packhouse where that item has been sourced. 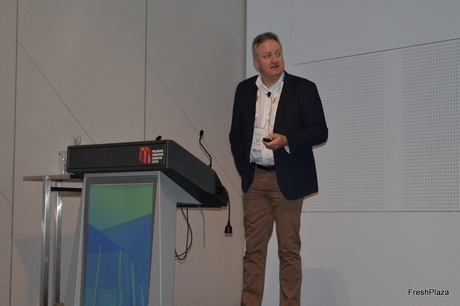 "Traditionally, produce items like apples, oranges, stone fruit, mangoes have had a global PLU, or price look-up number," he said. "It tells you what it is, but it doesn't give you any link back to where that Pink Lady or Granny Smith apple, or Kensington Pride mango has come from. In some case, the packhouse will also be the grower, or sometimes the grower might send it to a consolidated packhouse. But at least it is the first step in getting better linkage and traceability back to the packhouse."

But Mr Steele says the most exciting thing on the horizon is data embedded barcodes, and that comes in two forms; a slightly bigger "1D" barcode, or a much smaller "2D" barcode, called a data matrix.

"It includes a lot of additional data, for example, not just that a product is a tray pack of meat, but it has variable weight, production date, best before date, either a batch or serial number, and whether it is a prime cut or not," he said. "There are a lot of opportunities in the industry and food waste is one of them. So, if we can get product out through the checkout without having to throw it out. It is a better opportunity for the industry, just on that alone."

He added that Woolworths is implementing a new barcode trial, starting next month, working with two meat suppliers, using a 2D data matrix barcode. But the supermarket eventually would like to do a similar thing with fresh produce, which currently has a barcode, such as ready to eat soups and salad kits.

"What this means is that if you look at your pre-packaged salads, it has a pre-printed barcode on it," he said. "As soon as you want to include data like a batch code or use-by date, you have to move away to in-line barcode technology. This is the discussion that we have to have in the industry now, regarding what is the potential for businesses to introduce in-line barcode printing technology. The other big discussion is, we know where Woolworths is at, so we need to get the other retailers together to form an industry-wide roadmap. There's nothing worse as a supplier doing it one way for Woolworths, but all the others require the old way."

Globally, GS1 has been around for more than 45 years, and has around one million companies in 150 countries using the system to make more than six billion transactions per day. It a not-for-profit organization, and Mr Steele says it was started by industry, so it works for the industry, and some of the leading global brands sit on the board to give it a bigger presence in the marketplace.

"Implementing effective traceability processes can lead to big dollar savings across the global fresh food industry, right down to the store level" Mr Steele said. "Of course, the government is playing an increasing role these days by increasing regulations surrounding traceability requirements, market access and the like."

But Mr Steele admits that one of the challenges is the introduction of different types of barcode labelling on packages.

"You have QR codes which is for BTC - business to consumer marketing purposes," he said. "You have got your traditional 1D barcode for point of sale scanning. In the US there's a thing called 'smart label' where you scan it and it takes you to a brand-owner website that gives you access to all the off-pack label information around nutritional data and allergen statements. There's a lot of information that is hard to fit on smaller packets."

The company presented a global standard to industry last year, called Digital Link, which incorporates a URL into a barcode.

"The idea, if you think of Lord of the Rings, 'One Ring to rule them all', we would like to move to one barcode that is multi-purpose," Mr Steele explained. "So, it will satisfy the point of sale, and supply chain requirements, but also consumers can use it for marketing, smart labelling, and business to consumer engagement. At Gs1 we realise that people in the real world don't want multiple barcodes on products."