Most of the limes imported by Europe and North America come from Mexico and Brazil. Other Latin American countries also have production for export. In China, the fruit's production is expanding due to the growing domestic demand for the product.

The supply is good and that is causing prices to drop here and there, since the demand for limes is lower than the supply. With the summer around the corner, traders expect the demand for the fruit to rise in the coming weeks. With this growing demand, the prices for limes will stabilize. Organic limes are popular on the European market. The prices of the organic variant are considerably higher. 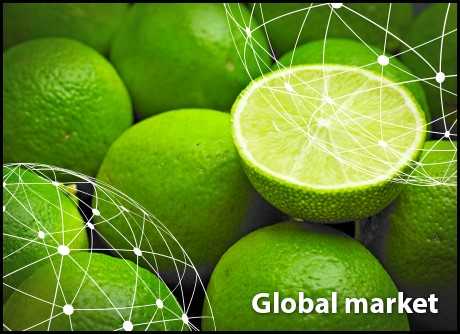 The Netherlands: Lime market in a dip
The lime market is currently in a dip. There is a large supply from Brazil, and the Mexican campaign has also started. For the past week or two, this has put pressure on the market, with prices amounting to around 4 Euro. Incidentally, according to importers, a price dip during this period is not unusual. In the meantime, the market has stabilized and the demand is also starting to pick up. An importer says that he hopes that his fellow importers will also take it a bit slower; then the market conditions will have to improve again. At the same time, the first Mexican organic limes are arriving after a long period of shortages, in which prices rose to 16-18 Euro, simply because there were hardly any organic limes available.

Germany: Stable market, increasing demand for organic
The volume currently available in Germany is adequate, reports a trader. Despite the lack of summer weather, sales are generally satisfactory. In terms of prices, wholesale limes are currently sold for between 4 and 6 Euro per package, which is also relatively normal for this time of the year.

Most of the supply is currently imported from Brazil. In the short term, the Mexican production is also expected to reach the German market. Traders say that Mexican limes are normally slightly more expensive than the Brazilian. Moreover, a high demand for limes is expected again during the summer. As soon as this is the case, other origins, including Colombia and Egypt, will also come onto the market and, often, limes are flown in by plane in order to meet the demand. Also worthy of note is the growing demand for organic limes. These are sometimes twice as expensive as conventional limes (12-13 Euro per package), according to a specialized trader.

France: Brazilian limes dominate the market
In addition to the limes from the world's largest producers, Brazil and Mexico, there is also a small selection from other countries in Latin America, such as Peru and Colombia. However, the limes from these countries are not yet available on the French market. In France, the demand for limes is expected to grow around the end of June. In the summer, limes are mainly consumed in cocktails and other drinks. Mexican limes are grown all year round, but the high season runs from May to mid-January. There are currently no significant problems affecting Mexico's lime production.

China: Growing demand for limes
Lime cultivation in China is expanding every year due to the growing demand in the domestic market. The most important growing areas are Anyue and Hainan. Limes are mainly used in drinks and are not directly consumed as fruit by the Chinese. At present, there are mostly Chinese limes on the market, but some South African limes will also be imported in the coming month.

United States: Price differences in the market
In the US, there is a normal supply of limes and a more stable price. "There is a steady supply of fruit for the summer period," says a Texan trader.

The limes come from Mexico, where the fruit's growers have had to deal with the impact of drought. The lack of rainfall has had consequences for the fruit's size. While the limes in stock are slightly larger compared to the same period last year, the limes on the market are smaller (sizes 230 and 250). “Normally, we go from small sizes to larger sizes, and then back to the smaller sizes of the new harvest. In recent months, there has been a poor supply of large sizes on the market. Furthermore, the new harvest now arriving on the market also consists mostly of smaller sizes."

Growing demand
The demand for limes in the US is increasing again. “This is due to the fact that the price has already reached the summer level. There is currently no oversupply of limes on the market."

“There are more Mexican regions than ever growing limes. The bulk of our imports come from Mexico, with some small volumes from Guatemala and Colombia. 10 to 15 years ago, there was only import from the Mexican regions of Veracruz and Michoacán. Today there are 12 states that export to the US at the same time."

“This week, we've seen that the fruit has been growing in size. Larger pieces will become available in the coming weeks. Then we'll have the summer market for limes, which will last three months."

South Africa: Limes mostly for the domestic market
South African limes are primarily intended for domestic consumption and not for export. The summer harvest is coming to an end. It has been a season with good prices paid for top quality limes, and the demand has been strong. But since the limes are harvested on a weekly basis, the labor costs are high. A number of lime producers have recently stopped growing the fruit. Now that the limes are becoming yellow, the remaining production is shipped to the processing industry to extract juice from it.