The start of the stone fruit season is around the corner in the Mediterranean. Spain continues to increase its stone fruit volumes and thus dominates the market in Europe. A good harvest is also expected in Greece, with rising export volumes to Europe and the Middle East. In Italy, the season has been more dramatic for apricots and nectarines due to heavy rainfall in recent weeks, which has caused a lot of the harvest to be lost. In South Africa, the dry weather has been the reason for a smaller production. In South America, Chile can look back on a successful year, with a 20% growth in nectarine exports to China. 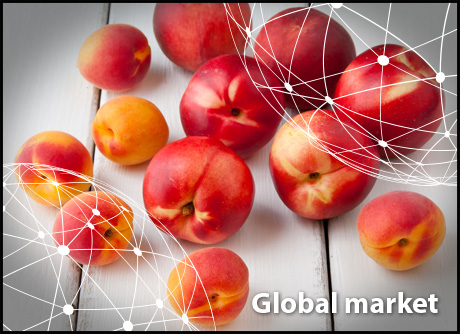 The Netherlands: Lower demand due to the weather
On the Dutch market, peaches and nectarines come mainly from Spain, a country that is currently dealing with a large production. Yet, consumption in the Netherlands is not yet really at the desired level. This is mainly due to the colder weather, which means there is less appetite for nectarines, peaches and apricots than usual. Nevertheless, traders expect this situation to improve in the coming weeks.

Germany: Spain dominates
The stone fruit season is currently gaining momentum in Germany. Spain in particular has dominated the supply in recent weeks. Shortly before Easter, the first Spanish nectarines and peaches were shipped to Germany. The Greek season also kicked off at the beginning of May. France, Italy and Turkey are now also slowly entering the market. After a relatively good start, the demand has been falling somewhat across the board. This, according to traders, is mainly due to the relatively low temperatures recorded in recent weeks.

The demand for apricots has remained virtually unchanged in recent years. Peaches, on the other hand, are visibly losing ground to nectarines and, to a lesser extent, to Paraguayo peaches. During the season, Spain is increasingly managing to hold a monopoly on German trade. This is partly due to the early start of the season and to the growth of exports. Some traders also say that Spanish growers opt for modern, sweeter varieties, especially for apricots, in order to get rid of the fruit's reputation as cheap mass production. Partly as a result of this, exports from Italy are losing more and more ground each year.

France: A week delay for apricots
In recent weeks, it has been colder than average in France for this time of the year, slowing down the growth of stone fruit. The apricot harvest eventually started in week 20, a week later than in other years. The production volumes stand at a normal level. The peach and nectarine season is expected to begin in week 24. Most of the stone fruit currently on the market comes from Spain. Due to the cold weather, consumption has been lower than usual this month, which has resulted in lower prices.

Spain: "Normal" season expected for peaches and nectarines
The Spanish peach and nectarine season has already started and the agricultural organization Cooperativas Agroalimentarias de España estimates that this year's total production will amount to 1.6 million tons; an increase of 9% compared to last year.

However, the production growth differs per region. Catalonia is recording strong growth, with a 30% increase for nectarines and Paraguayo peaches and an 18% one for peaches. The regions of Aragon, Andalusia and Murcia all record slight increases in both products, while production in Extremadura is falling by almost 30% compared to last year for both peaches and nectarines.

Italy: Difficult season for stone fruit
Compared to last year, people in the Basilicata region are dealing with a good production. Due to the small sizes of the peaches, prices have fallen. The season has only just begun with prices ranging between €1.30 and €1.50 / kg.

The apricot season has already ended in the region and has been much less favorable than the peach one. Consumption, however, has remained too low due to the cold weather. Prices have stood between € 1.20 and € 1.40 / kg.

Things didn't go well either for peaches. “We are working on the harvest of the protected Nectarprima, a good quality variety with prices that exceed 2 € / kg. In the open ground, however, the Nectarprima and Big Bang varieties have recently been hit by abundant rainfall, which has severely damaged the harvest," says an agronomist.

In Apulia, the rains continue to fall and are taking a toll on stone fruit. Moreover, the fruit sizes remain substandard compared to what the traders want.

In Sicily, the nectarine production is lagging behind and the fruit is hardly available. The climatological conditions have not helped producers on the Italian island. Weather-permitting, Italian products should be on the market by between 10 and 12 June. This is also the case for the apricots on the island. Weather conditions such as hail storms and cold temperatures have taken a negative toll on the flowering, and the fruit's consumption is also low, both locally and nationally.

In Emilia-Romagna, the early apricot varieties have mostly been lost due to rainfall. Varieties such as the Aurora and Wonder Cot also suffered problems and the market was consequently affected, as the quality wasn't good.

Greece: Expanding exports
In Greece, prospects point to a season with good quality and a great stone fruit production. The cold winter has contributed to this good season, meaning that a large quantity of peaches is expected to be harvested. The season starts around the end of May. The north and the northwest had good weather. In other parts of the country, the crops have been damaged to some extent by rainfall.

Given the good season, Greek growers hope to enter the European market. A lot of exports go to Eastern Europe, and attempts are also underway to get a firm foothold in the Middle East. In Western Europe, however, Greek traders face strong competition from Italy and Spain, both of which have large, good quality productions and are geographically in a more favorable location than Greece.

China: Stone fruit prices still high at the moment
The stone fruit season is in full swing in China. The peach harvest is fully underway. A great supply is now coming from Hebei and Hubei. Due to the lack of rainfall this year, the fruits are slightly smaller, but they still have a good taste. Since peaches are only just coming on the market, their price is still high, but as soon as the supply on the market increases, the price will fall. Various peach seasons overlap, which means there will be a lot of fruit available on the market and competition will be tough.

Due to the low production, fruit prices had been expected to be higher; however, the large production of South African grapes threw a spanner in the works. After all, traders in Europe opted for the cheaper grapes, rather than the stone fruit. The quality of the stone fruit was generally excellent.

Chile: Successful export of nectarines to China
The export of nectarines from Chile to China has increased by 20% this year, reaching 20,063 tons. Exporting has turned into a success for the country since the opening of the Chinese market in 2017. Nectarines have become the second product, besides pears, to be allowed to be exported to China from this South American country, and negotiations are currently underway for citrus fruits. The nectarines have also been strongly promoted by Chile in China.

United States: Slow start for the season
Due to weather conditions, the stone fruit production has had a slow start in California. "The main reason for this is the low temperatures recorded, and not necessarily the rain," says a trader. “The plum season is not yet in full swing and stocks are limited. The nectarine and peach volumes are currently lower than usual. A normal harvest is expected later in the season. The fruit's size is also good at the moment."

In addition to California, the US states of Georgia and South Carolina are also producing. Colorado, Washington, Pennsylvania and the states around the Great Lakes will follow later in the campaign.
The demand currently seems stronger, and that with smaller volumes; nevertheless, prices remain fairly similar to those obtained last year. In the United States, the market seems fairly stable.

Canada: Apricot production swept away
The Okanagan Valley, in British Columbia, is having a difficult stone fruit season. Frost has destroyed almost the entire apricot production and has also caused great damage to nectarines and peaches. However, the valley is also a noteworthy producer of apples and cherries, and these fruits are doing better at the moment.