The 2018/19 season has proved to be one of the most difficult seasons for the table grape industry, due to difficult growing conditions and a market flooded with product, leading to lower prices. In spite of a difficult season the ARRA varieties, managed by TopFruit, still received positive feedback from growers and the markets. 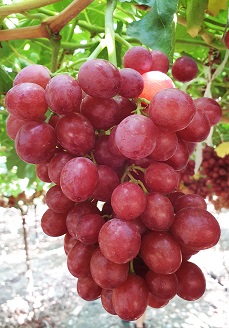 During the past season TopFruit held two ARRA open days, welcoming a record number of 170 attendees, the first on 17 November 2018 in Aussenkehr, Namibia and the second in the Hex River Valley, South Africa on 5 January 2019. The variety that stood out the most at both field days must surely be the early red variety ARRA 29 with its good berry size, bright red colour, crisp texture and most important of all: great shelf life (pictured right).

In the second year of exporting ARRA 29 from Namibia and the first year from the Hex River Valley in South Africa, feedback from both growers and marketers has been very positive. ARRA 29 looks to be a great replacement for Flame Seedless which had a difficult season in South Africa.

According to TopFruit's Stephan Nel, ARRA 29 comes into production in the Hex River Valley in week 2, it colours naturally without difficulty in this area and has the right specifications for the Asian markets. He feels the future looks bright for this newcomer to the market. 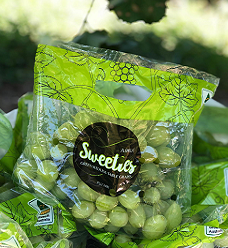 ARRA 15 had a good production season in the Hex River Valley, and performed very well this season. ASViljoen Boerdery was the first grower/exporter to make use of the newly designed ARRA Sweeties® bags for their ARRA 15 this season. With its bright green and black colours, quality fruit in this packaging clearly stood out from the rest.

Anton Viljoen commented that both the packaging and trademark was well received in the UK and Asia. The growers will build on this achievement going forward making sure only the best quality fruit is packed in the branded packaging.

ARRA 14, a mid to early black variety, is another first to be exported this year from the Hex River Valley. It is labour friendly and easy to farm, with good eating quality and a beautiful bloom on the berries even after cold storage. Feedback from the various markets showed this variety was well received for its first production season.

Although this season was difficult for the industry as a whole, we will start afresh next season and look forward to a bright future with promising ARRA varieties in South Africa and Namibia.