The Peruvian mango season is almost over and the European market is switching to African imports. The first mangoes from South Africa and Cote d'Ivoire are already on the market. While the Italian acreage continues to expand, growth in Spain is being curbed by the bad campaign in 2018. Business is going well in the US. More Mexican mangoes arrive every week and the demand is so high that the fruit can be sold immediately. Australian traders are happy with the results achieved this past season, with a large harvest and high demand. 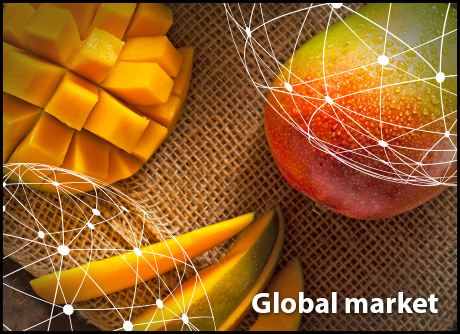 Germany: South Africa replaces Peru
The German wholesale market is currently in a transitional phase. Peru is slowly disappearing while South Africa takes over the market. "There's a particularly low supply of the smaller sizes," says a trader. Since these are the most popular ones, there has naturally been an impact on prices. The ready-to-eat mangoes shipped by air freight currently cost between 39 and 45 Euro per 6 kg package, while the average price is normally around 30 Euro.

Both Peru and South Africa market basically the same varieties (mainly Kent). Peru dominates in terms of quality, especially when it comes to the mangoes shipped by air. South Africa, for its part, is better known for its mangoes shipped by sea. These reach prices of between 7 and 10 Euro per box. In general, Peru is more popular with German wholesalers and the demand is expected to fall rapidly after the Easter holidays. At that time, the growing supply of stone fruit normally happens at the expense of the demand for exotic species.

The Netherlands: Good start for African mangoes after smooth end of Peru
Dutch importers kicked off the African mango season with the arrival of the first mangoes from Cote d'Ivoire. The season kicks off with the green Amelie mango, followed by the Kent variety. The former is expected on the market at the end of week 17. The conditions in the mango market are very good compared to last year, as Peru is almost completely off the market. The quality of the current Kent leaves something to be desired. Traditionally, the Ivorian mango season lasts for five to six weeks, after which other West African countries take over.

Belgium: Record high prices
The latest batches of tree-ripened, air-shipped mangoes of the Dolce variety have arrived from Peru and prices have reached record high levels. Prices are also very high for tree-ripened Kent mangoes from Peru. Within the next ten days, the Peruvian shipments by air will stop. After this, the market makes the switch to Kent mangoes from Cote d'Ivoire. Ready-to-eat mangoes are hard to find on the market and are currently being sold at high prices. The demand for ready-to-eat Santana mangoes is high, but the quantities supplied are far too small to meet the demand.

Italy: Consumption and production are increasing
While the demand for mangoes still stood at 4,800 tons in 2012, in 2016 it increased to 9,000 tonnes. The demand is particularly high in the second half of the year, with a peak in December. More and more mangoes are being grown in Sicily. The most popular varieties here are the Kensington Pride, Kent, Maya, Glenn and Keitt. The Sicilian growers are doing good business. "The demand exceeds the supply," one of them says. “Since our mangoes don't need long to reach the Italian and European markets, their quality is hardly affected by the time they reach the consumer." The good results are encouraging an expansion of the acreage. The demand for ready-to-eat mangoes is also on the rise, and Sicilian growers are trying to meet it.

France: Nice weather reduces the demand
France is also receiving the last mango shipments from Peru. A trader tells us that there are many quality problems. Large sizes are traded for € 6.50 - € 7.00 per box. The smaller sizes are sold for around € 7.50 per box. "The volume of air-shipped mangoes has been reduced over the past week," says the trader. “This has caused prices to reach very high levels." The air-shipped mangoes are of average quality. The trader stresses that this is not an easy period for the mango market. "The nice weather is almost there, so consumers are becoming more attracted by strawberries and raspberries." The first shipment of Ivorian mangoes arriving by air and sea will hit the market next week. This year, Cote d'Ivore's harvest is 20-30% lower than last year, as a lot of fruit fell early from the trees due to the impact of heavy rainfall.

Spain: Growers have had a bad season
The Spanish mango season came to a close in November. The total harvest amounted to 34,000 tons, 30% more than in 2017. A trader says that it has been a difficult season. “The European market was unable to absorb the many Spanish mangoes. There was a surplus of small sizes and there were just as many Brazilian mangoes on the market as in previous years. At the same time, there were a lot of apples, pears, grapes and summer fruits on the market. ”Heavy rainfall during the harvest period took a toll on the quality. As a result, prices fell considerably. Due to the poor results of the past season, the expansion of the acreage has slowed down. The Spanish mango season only lasts a short time, and it is not easy to sell the large harvest within such a short period.

At the moment, Spanish traders are importing mainly Brazilian mangoes of the Palmer variety. Now that the Peruvian season is ending, the prices are high. Not very many mangoes are imported.

US: Mexican volumes are increasing
As Mexican cultivation shifts from one area to another, the volumes are increasing every week. “We started in mid-January with three to five loads a week, and this number increased in early February," says a Texas trader. "We now have about six to seven loads coming in every day, and this figure is expected to increase even more in the coming week." At the moment, Mexico is mostly supplying smaller sizes. For the larger sizes, the volumes are smaller.

The increase in the supply is accompanied by a growing demand. "As the weather improves, the demand also grows," says the trader. “We are able to sell everything we get almost immediately. We accumulate no stocks. Supermarkets in particular continue to demand more. ”The prices for larger sizes amount to around $ 8- $ 9 / FOB. The smaller sizes are sold for $ 5- $ 6. When the season started in January, the price for the large sizes was still $ 12.

Australia: Large harvest sold well
The Australian mango season ended in March. The production reached 10 million trays, making it the second largest harvest ever. The Australian Mango Industry Association (AMIA) reports that the quality was exceptionally good. Taste tests yielded good results for all varieties in all growing areas. The weather conditions did create some challenges. Some growers harvested fewer mangoes than expected, which made their season shorter. The Honey Gold, Calypso and R2E2 varieties are very popular in the market. According to the AMIA, the growth achieved in recent years has mainly been recorded by these three varieties, but traditional varieties, such as the Kensington Pride, are also doing well. The supply and the demand are increasing proportionally for all varieties.

It has also been a good year for exports. The AMIA is committed to opening up new markets. Marketing campaigns were organized in partnership with exporters, importers and retailers in Singapore, Hong Kong, South Korea, New Zealand and the US. A research program took place in the Middle East.

China: High demand and limited supply
The mango season is in full swing in China. The main production areas in China are Hainan, Guangxi, Yunnan, Sichuan and Taiwan. Next month, the mangoes from Taiwan will hit the market. There is currently a strong demand and a limited supply, so prices are high. Mangoes are also imported from other countries, such as Cambodia, Vietnam and India.