“Retail, don’t look away from TR4”

Fusarium oxysporum f. sp cubense Tropical Race 4, TR4 in short, also known as Panama disease, is starting to show up on the radar of major banana growers. Not a banana conference goes by without presentations on TR4, the mould that has plagued the sector for two decades now. 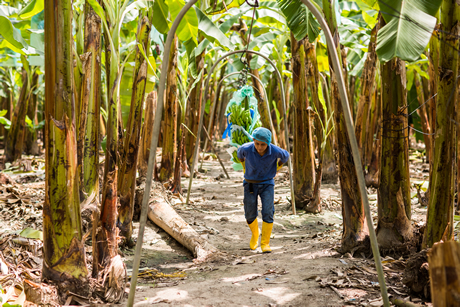 It’s now time to also increase awareness among small growers and other links in the supply chain, and to work together to prevent a continued spreading of TR4. Last November, during a GlobalGAP congress in Lima, Peru, a call for action was presented with that aim. It’s also a call for supermarkets not to look away.

“The call for action wasn’t made during the GlobalGAP conference without reason, because it’s a wake-up call for retailers as well,” says Luud Clercx of Agrofair. He was present during the launch of the call for action, he held a short presentation before, and then participated in a discussion panel about this theme with the Peruvian Minister of Agriculture, among other participants. The six points in the document concern, among other things, research, development of training programmes, risk management and support of early warning systems. This mostly appears to put focus on the production. But along with other interested parties, retail was called on to also help face this challenge. So far, the following supermarkets answered the call: AEON (Japan), CAA (China), Spinneys (the Middle East) and REWE (Germany). 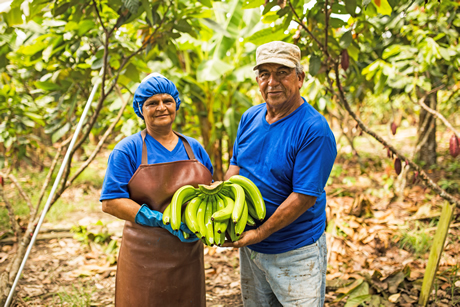 Working together against mould
Multinationals such as Chiquita, Fyffes, Del Monte and Dole are already working on the TR4 problems, but the mould threatens so much more than just global trade. “Only 15 per cent of bananas grown globally is exported,” Luud says. “This is an aggressive mould disease that also threatens other varieties and productions, such as the banana production for the local market.” This means the problem affects the food supply of millions of people. “We would like the export sector, which has more financial elbow room than small growers, to take the lead in this with governments and sector organisations, and that they’d look beyond their own plantations.”

Protecting the small farmers against the mould is in the interest of the export sector as well, according to Luud. After all, the small farmers aren’t just at risk, they’re also a high-risk group. Growers with a small area often work at large plantations during the week, and with their own banana plants in the weekend. “Because of these cross-connections there’s a danger of infection for the large plantations, and that’s why there should be a sectoral approach at country level. We have to work together to keep the mould out.”

Invincible mould?
The first step to involve more links in the supply chain in the challenge is to create more awareness. There’s still a lot of ignorance and a lack of reliable information regarding the risks and the spreading mechanisms of this mould among producers, senior civil servants, traders and visitors of banana plantations.The mould is spread by infected plant material, infected soil on shoes, tools, lorries and other means of transport. In the end, people spread the mould. “It’s a very serious threat, mostly because not much can be done against it. That’s because the mould is in the soil,” Luud explains. When TR4 is found at a plantation, no bananas can be grown in that soil for 30 to 40 years. “Right now, the mould hasn’t arrived in Latin America yet, but it’s only a matter of time.” Other moulds threatening the banana production, such as the Sigatoka mould, can still be combated using conventional means. “The sector is losing that battle as well, because more and more treatments are needed to combat the mould, but at least something can be done against it.” On average, banana growers spend two dollars per box fighting this mould. 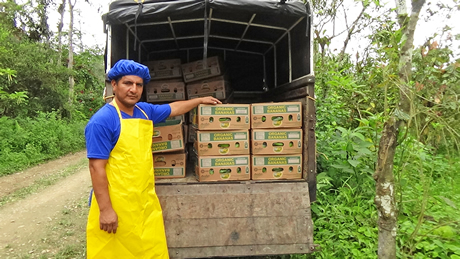 Best solution is prevention
Globally, bananas are the type of fruit traded most. Both in Europe and the US, the banana is on the list of fruits sold most often. Because of that, supermarkets have an interest in bananas also being on their shelves in future. “It’s a very popular fruit, but supermarkets often blame each other,” Luud says.

“What we want to achieve is that the entire sector, including the supermarkets, are informed about TR4 and that they look at preventative measures.” Supermarkets play an important part in that. Measures at the gates of plantations to prevent the spreading of the mould cost money, and the same is true for investments in a sustainable banana production. “It doesn’t help when supermarkets sell bananas at record low prices, or when they have cheap bananas on their shelves. That creates price pressure in the supply chain. The sector crosses itself and hopes for the best.” 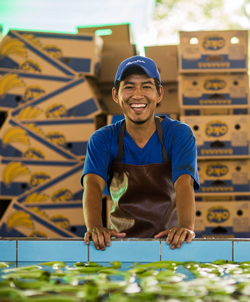 “GlobalGAP is originally a certificate from European retail, and with the call for action we want to call on supermarkets to be informed and become aware of the problems,” Luud explains. GlobalGAP developed an add-on with information about simple, preventative measures banana producers should take to keep the mould off their plantations. “We want to promote that more as well, because it’s a useful add-on.” For example, the add-on can provide a guideline for governments that want to draw up preventative protocols. “Prevention really is the best and cheapest solution.”

The call for action should wake up supermarkets. German retailer REWE signed the document, as did a number of supply chains from Asia and the Middle East. “We would like to add more supermarkets, and that retailers become more involved,” Luud continues. A number of major supply chains, including REWE and Tesco, are members of the World Banana Forum, although that number is limited in relation to the number of supply chains. “A lot still has to be done. The banana sector is well aware of the threat, but awareness still has to grow within the general fruit trade and retail.”

For a long time, TR4 has been on the radar of research institutions, such as the University of Wageningen with Prof Gert Kema of Bioversity International, the KU Leuven (which manages the largest banana collection in the world) with Prof Rony Swennen and other institutions. Because of the implications for food safety, the FAO is also concerned about TR4.

Via GlobalGAP and organisations like GroentenFruit Huis and the European platform Freshfel, the challenge is gradually also brought to the attention of sector organisations, although companies should also take responsibility. Last October, Agrofair took up the gauntlet by giving a seminar on TR4 at Swiss retail supply chain Migros. “They were interested in the problems, but it didn’t lead to an actual change.”

A few cent more per box
The role retail can play is very simply. For instance, supermarkets can promote GlobalGAP’s add-on and pay a premium when growers actually meet the requirements of this add-on. “It’s a tough business, but retailers should be willing to pay a little more as incentive for the growers. Requirements are now often made, but these aren’t compensated.” Just a few cent more per box could meet the costs of banana growers considerably. “It doesn’t have to be much, just a few cent per box would do the trick,” Luud confirms. “Consumers wouldn’t even notice it in price per kilogram.”

Besides, it’s also important the sector is heard more. Responses from the banana sector when Aldi announced a price reduction late last year, are a good example of this. “That price reduction of a dollar per box was even too much for the major banana exporters,” Luud says. “We would prefer it if retail didn’t look away from the problems. The rat race to the bottom of an ever-cheaper banana should be turned into a rat race to the top – how can the entire sector cooperate and enter into a dialogue to make sure this popular and nutritious fruit has a preferably sustainable future?”

Prevention = buying time
In the end, the preventative measures won’t solve the problem. Luud also acknowledges it’s mostly a way to buy some more time. Sooner or later, this mould will show up in Latin America, as happened with the Sigatoka mould as well. However, this time is very much needed for research into actual solutions. Some researchers mention the importance of biodiversity in soil and proper soil management to limit the risk. Besides, various institutions are working on resistant varieties. The University of Wageningen is also developing plans in that direction, under the leadership of Prof Gert Kema, well-known banana researcher, and he pleads for more diversity as well. The large-scale production in monocultures of just one variety, the Cavendish, has made the sector particularly vulnerable, as is now apparent, and that really has to change. Improving the bananas should therefore also extend to other banana varieties. In Australia, research into a resistant Cavendish is relatively advanced. “The other characteristics of the Cavendish version, such as storability, options for transport and flavour, have to be researched further.”

For this research in Australia, however, genetic manipulation was used. This will lead to much resistance in, among other places, the EU. Besides the ethical discussion, this is still just one step in the direction of a solution. “Introducing new varieties on a large scale and replanting millions of hectares will cost billions,” Luud predicts. Right now, planting one hectare of a banana plantation, equipped with a highly technical production system, costs between 12,000 and 20,000 dollar in Latin America. “For the complete banana area, the costs would be astronomical. The banana would become a luxury item, and it would definitely not be for sale for one euro per kilogram in supermarkets anymore.