Launch of the 2022-23 campaign with exceptional sugar levels

The launch of the 2022 apple-pear campaign took place in Paris last week. More than 120 players of the sector gathered for the annual event where producers, marketers, wholesalers, restaurants, processing plants and retailers reviewed the economic situation of the sector and presented the harvest predictions for 2022 in France and in Europe, as well as the Eco-responsible Orchards approach, communication strategy and media plan for 2022-2023. 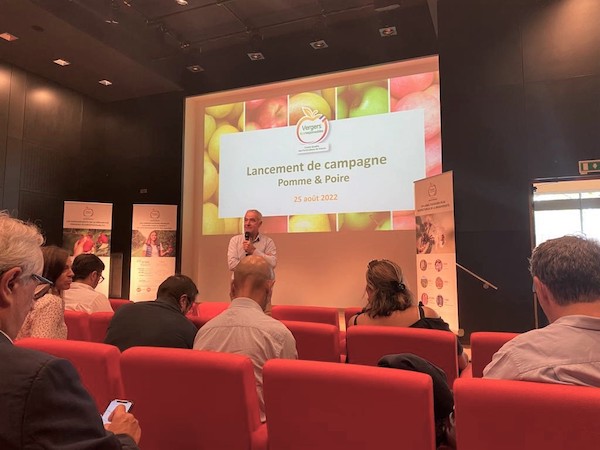 Apples: harvests revised downwards in France and Europe; Gala variety particularly affected
In early August (at the Prognosfruit congress), the predictions indicated 1,468,000 tons, which is close to the average and more than the past two years. But the continuous heatwaves and the drought have affected the production potential. “In terms of calibers, the predictions were good as we were expecting rain, but the water reserves turned out to be insufficient for some producers, which changed the scenario completely,” explains Vincent Guérin, head of economic affairs at ANPP.

“In the last few days, the situation has pushed us to reevaluate these harvest predictions.” The French harvest should be between 1,300,000 and 1,350,000 tons, which is 4% less than last year’s small harvest. The Gala variety seems to be particularly affected, “especially if we talk about the marketable apples for the fresh market because high temperatures affect coloration,” explains Vincent Guérin. “There will be more Gala apples than usual going to processing plants and fewer on the fresh market.”

At the European level, the harvest, initially predicted at 12,069,000 tons, will also be revised downwards. For now, the figures have not changed but some Italian operators have already announced a 30% reduction for the Gala harvest. Germany, the UK, Belgium and the Netherlands will also need to revise their initial predictions downwards. Poland, the first European producer, has predicted a harvest of 4,500,000 tons but 70% of the country’s production will have to go to processing. Lacking the necessary means, many producers have indeed been unable to intervene in the orchards.

Outside of Europe, China is expecting a 20% loss of harvest, which represents about 10 million tons lost due to the frost and the drought.

Nearly all of the Club varieties continue to progress thanks to the new plantations.

In short, the European harvest predictions, which were initially very close to last year, will have to be drastically revised downwards due to the drought in France and Europe. A large proportion will go to processing, especially in Poland, so the offer will be more limited on the fresh market. The supply of fresh Gala apples will really be reduced due to the weather conditions in many European countries. However, the quality of the fruit is good, with exceptional sugar levels. “The consumption levels are still uncertain but with the large calibers and high sugar levels, we hope the consumption of apples will pick up again.”

Pears: better harvest levels than in 2021
This year, the harvest of French pears should reach 137,000 tons, according to the predictions initially made at Prognosfruit. “The current harvest levels are slightly higher than average and much better than last year when the production barely reached 56,000 tons.” There is a production increase for the summer pears such as the Williams and the Guyot. As for the Conference pear, the harvest was initially predicted to be close to the average, but the current situation could lead to a downward revision. The predictions are good for the Comice and Angys varieties.

At the European level, there will most certainly be a need to revise the predictions downwards. Belgium and the Netherlands have also suffered from the drought and the lack of irrigation, which have reduced the caliber of the fruit. In early August, the European production was estimated at 2,078,000 tons, which is slightly lower than the 10-year average but higher than in 2021. In Spain, the production is small this year due to the frost in the spring, especially in Catalonia. The Italian production is better than last year but the country has not yet regained its full potential due to massive uprooting. In Portugal, the Rocha pear, which did very well in 2021, will regain more modest levels this year (11% below average). Finally, in the Netherlands and Belgium, the levels are close to the average but the predictions will most likely be revised downwards due to the drought.

As for the production outside of Europe, we observe a deficit of 15% in China, which is the world’s largest pear producer. In the United-States, the harvest should be “normal” and in Turkey, the harvest should exceed last year’s levels, as well as the average. 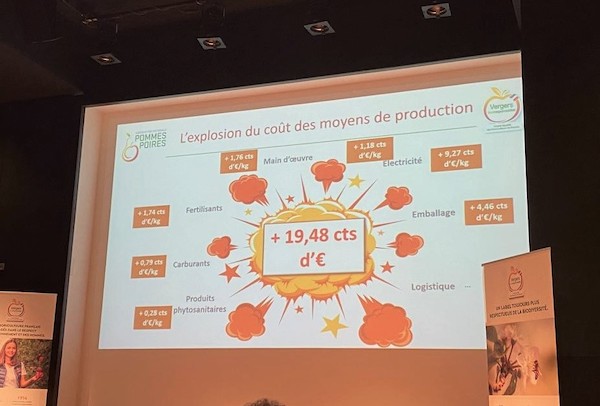 Many challenges for this new campaign
Successive weather hazards, soaring production costs, increased regulatory and societal pressure, increasing national and international competition…For the past 10 years, the sector has been faced with a growing number of challenges. “The 2022 campaign will be marked by inflation but it is not the only factor weighing on the sector. The current conditions are so exceptional this year that succeeding in producing apples and pears is already a feat,” explains Pierre Venteau, director of ANPP, the French Apple Pear Association.

The producers were hit by a historic frost in early April, which they “anticipated and managed rather well,” according to Pierre Venteau, using candles, wind towers and spraying. Then followed the hail storms in June, with some facilities damaged for some producers. And finally, the combination of high temperatures and drought this summer has been an additional blow to the production.

The apple market is also getting heavier, with the increasing competition from Poland. “The consumption of fresh apples is already declining. The last figures show a 11% decrease in household consumption. And in 2021-2022, some 12,000 tons of apples from Poland also entered the French market, for fresh consumption and for the processing industry.” Another factor weighing on the market has been the smaller size of the apples. “There may be more apples to sell but smaller volumes.”

Regarding the soaring production costs, these affect all stages of the production chain. “Oil prices have doubled between 2020 and 2022 in order to work in the orchards. For the fertilizers, the costs have been multiplied by 3. Another factor linked to inflation and regarding labor is the 6 increases of minimum wage since January 2020, 3 of them occurring this year.” “The inputs against scab increased by 23% between 2020 and 2022, the organic insecticides have gone up by 5% and the growth regulators by 7%.” The cost of electricity has also been multiplied by 12 in a year and the cost of packaging is 26% higher than in 2020.

Another important factor concerns the growing regulatory and societal pressure. With the Bee Decree of 2021, the new constraints on application times (right before or right after sunset) complicate even more the work of the producers who must already follow the Wind Decree prohibiting any treatment beyond 3 degrees on the Beaufort scale.