“There’s so much land available, so many opportunities for horticulture”

A common thread to the first investment forum arranged by the Horticultural Development Council was the importance of an enabling environment whose impact cannot be underestimated, noted moderator Waddilove Sansole, agricultural project manager in Southern Africa, as well as a lot of emphasis on the patient capital needed for longterm crops.

The Zimbabwe Investment Development Authority (ZIDA) was established last year as an amalgamation of three prior entities, and it is a one-point contact to drive investment into Zimbabwe. ZIDA handles the facilitation and protection of investment in Zimbabwe, ZIDA’s chief innovations officer Dr Raban Masuka told the forum. They negotiate on behalf of investors and public-private partnerships with government while advocating for policy consistency.

“We’re hoping that we grow this economy over the next nine years by an average of about US$50 billion,” said Dr Matsuka. “We want to ensure predictability and foster assurance.” 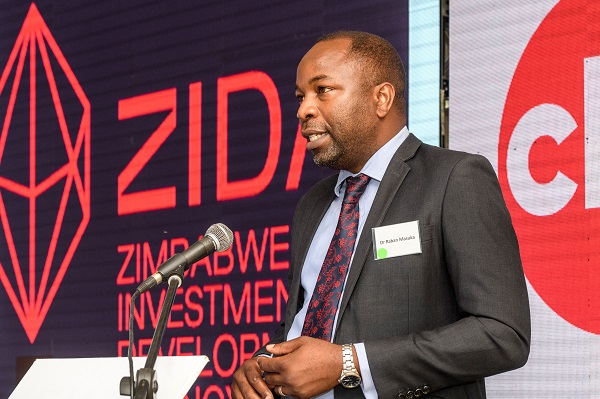 “We believe that horticulture is a key aspect to our economy and we want that to be known. Tobacco’s contribution to the economy currently is US$500 million, when you’re looking at horticulture it’s sitting at US$77 million. How can you leapfrog that to US$300 or US$400 million?”

Protection against expropriation
Land tenure is key, he noted, because money cannot be borrowed against a lease agreement but opportunities exist around transferable titles on land.

Tenure insecurity has led to a preference for short term crops like peas or fine beans, remarked Liam Philp, Horticultural Development Council vice-chairperson. “For us to move towards long term crops like citrus and blueberries land security needs to be in place.”

ZIDA protects investors against expropriation, said Dr Matsuka. “If the business that you’re bringing into the government is longterm and sustainable and it’s something that can grow this economy, government is very willing to listen to you. The investor and the country should benefit and it means more jobs for our people. There’s so much land available, so many opportunities.”

Zimbabwe earned US$111 million from horticultural exports in 2020 but Kenya’s fresh produce and flower exports exceeded a billion US Dollars, which shows the opportunities in this sector, Similo Nkala, director of operations at ZimTrade pointed out.

The majority of Zimbabwean horticultural exports go to the Netherlands, the United Kingdom and South Africa. The United Arab Emirates takes 2% of this total, consisting mostly  of US$905,000 of Zimbabwean citrus exports.

The UAE’s total fruit import bill was 2.4billion in 2018, Mr Nkala set out, much of that destined for re-export to the rest of Gulf Cooperation Council, and that is a market of which Zimbabwe would like at least 5% market share. 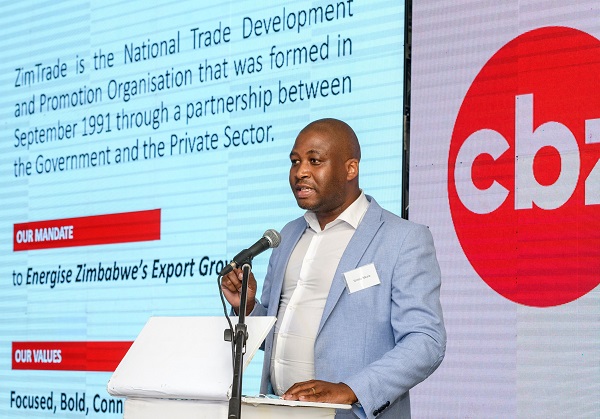 In May, ZimTrade facilitated an outward trade mission to Dubai which has already led to a contract to provide fine beans, peas, citrus, avocados for five years. Zimbabwean blueberries have elicited a lot of social media attention recently among consumers in Dubai and the rest of the UAE.

“We believe that Dubai is an interesting market and there’s a lot we can supply.” Many enquiries into citrus – is production sufficient?
Current pea exports (mangetout and sugar snap) are US$23 million, while on avocados it is US$14 million. A lot is also happening in macadamias, he said. Sweet potatoes is a commodity of interest: the total world market in sweet potatoes is valued at about US$125million, of which almost half imported just by the Netherlands and the UK, Zimbabwe’s major horticultural trading partners.

Organic produce also has a big future, he told the forum. “ZimTrade recently helped with the certification of organic pineapples in the Honde Valley [in the east of Zimbabwe] for a market in the Netherlands.”

He said that there has been a lot of enquiries into citrus but would Zimbabwe have enough citrus to satisfy demand? “Citrus production is an area where we believe there’s a lot of potential.”

A Manicaland farmer noted a shortage of limes and lemons and pomegranates in the USA, while Dr Matsuku from ZIDA referred to the opportunities for Zimbabwean citrus in Russia. A protocol to export to China is in process.

ZimTrade has a memorandum of understanding with PUM, a Netherlands-based volunteer organisation for retired experts and executives to bring in experts to come and work with Zimbabwean farmers in-situ on production or certification (Covid has temporarily disrupted personal visits, hopefully to be resumed next year).

Zimtrade will be at Fruit Logistica in Berlin next year, where Zimbabwean exporters are hosted cost-free at the Zimtrade stand. He invited potential clients to visit the Shop at Zim portal.

Liam Philp (HDC vice-chairperson), Stanley Heri (HDC chairperson), Linda Nielsen (CEO of the HDC), Similo Nkala (ZimTrade director of operations) and Tatenda Marume, ZimTrade manager of export development. A Memorandum of Implementation was signed between HDC and ZimTrade as a stategic partner to carry out the industry's growth strategy  (photo by Mike Wall) The vice-chairperson of the Horticultural Development Council, Liam Philp (Team Zimbabwe’s midfielder) said: “We’ve come a long way since the new dispensation and there’s a lot of good work done in the background. We need to be a one billion dollar industry,” he said, before noting that Zimbabwean horticulture was playing on an uneven field.

The obligation to surrender 40% of foreign currency income to be converted to the local currency is a controversial policy also affecting Zimbabwe’s mining sector and other exports.

“We are stuck in the middle," Mr Philp cautioned. “When we get the money at bank rate and we go to our suppliers to buy fertilisers and chemicals and fuel, it’s priced above  and that’s what hurting us.”

Unaiswi Nyikadzino of the Citrus Growers' Association of Zimbabwe explained that this policy was a trade disabler and acting as an export tax.

Moreover, the HDC strongly believes that the intermediated transfer tax (IMT) of 2% should be tax-deductible, and farming inputs at bank rate.

The benefits of beneficiation and agroprocessing on peppers and tomatoes (source: Liam Philp, HDC)

Highest freight costs in the region
Zimbabwe has significantly higher freight costs than Kenya, its main competitor, and the highest in the region, and it is compounded, Mr Philp remarked, by the fact that 20% of the weight of the cargo was made up by packaging material.

Air freight accounts for 55% of turnover and some of the new markets want to be quoted CIF (cost, insurance, freight), not FOB prices, he added.

Ms Nyikadzino set out the disincentives to Zimbabwean horticulture at the moment, for instance high production costs and a high cost of energy, specifically of diesel.

She noted that some in the horticultural sectors have, despite the very high costs, invested in renewable energy solutions like solar due to interruptions in the power supply from the national grid and pointed out that incentives for such initiatives would benefit the sector. 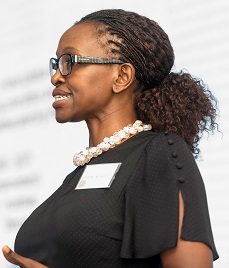 Ms Nyikadzino called for private sector assistance with road rehabilitation and to resuscitation of dilapidated coldrooms and packing sheds.

“We literally do not have a rail system at this stage, it has deteriorated but for the time-bound perishable sector, transport is a make or break aspect,” she said.

Congestion at South African ports (specifically Durban) this past season has again emphasised the importance of the Beira Corridor for Zimbabwe.

Special economic zones have been set up, for instance in Beit Bridge with warehouses to store goods in transit to South Africa, as well as in Bulawayo, Harare, Victoria Falls, and in Fern Hill in Mutare for shipping from Mozambique.

“We need a step change and it's not a lot to be addressed - we need fairer terms on export proceeds, patient capital and inputs at bank rates,” Mr Philp concluded the first day of the Horticultural Development Council investment forum.

Read the article on the first session of the investment forum.