Despite some consumers pointing to planning to eat out less often to save money during these inflationary times, 80 percent of consumers have ordered from or eaten at a restaurant in the past few weeks. Restaurant engagement is far higher among households in their prime child-rearing years: Older Millennials and Gen X, shoppers ages 32 to 56.

“Those early pandemic months saw lower consumer mobility and more time in the kitchen,” said Jonna Parker, team lead Fresh at IRI. “As life’s hecticness has resumed, the eternal battle between time/convenience, healthfulness, and money has intensified in the past year.” 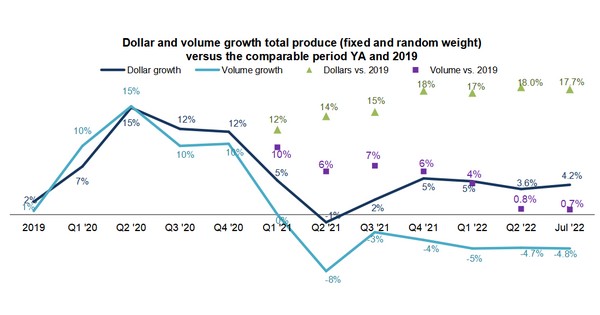 The July edition of the IRI monthly survey of primary shoppers underscores the market complexity.

July 2022, fresh produce sales reached $7.7 billion, surpassing the record set the prior year by +4.2 percent. However, looking beyond dollars that were highly affected by inflation, unit and volume declined versus July 2021. Vegetables were down slightly less than fruit.
Each of the July weeks generated right around $1.5 billion in fresh produce sales. The first week, the holiday week, was the strongest, but sales held remarkably steady throughout the month. 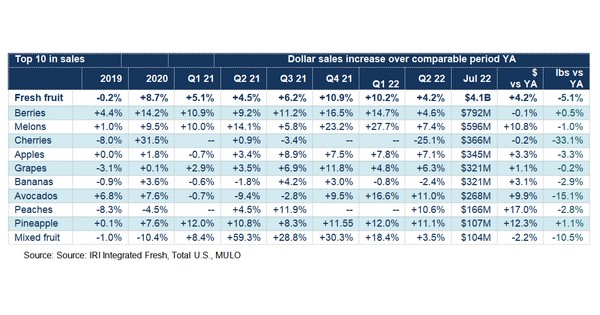 “In the fourth quarter of 2021 and the first quarter of 2022, the sales performances of fruit and vegetables were far apart,” said Parker. “In July, they are converging right around +4 percent dollar growth.”

The fresh share of the business has been rising steadily. July 2022 shows that consumers are not switching out of fresh produce out of inflationary concerns.

“While berries were the biggest seller in July, the gap with the number two, melons, was by far not as big as we’ve seen,” Parker said. “In part, this has to do with below-average inflation, but we also saw cherries come on strong and mixed fruit moving back in the top 10 sellers due to the Fourth of July sales spike.” 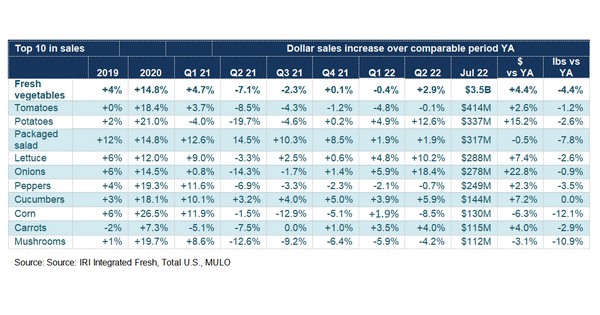 The next report, covering August, will be released in mid-September.