Supplies of onions are still on the lighter side. “We have our overwinter onions running right now and then we move into transplant, and then early direct seed. These are all summer onions and then usually by mid-August we move into our storage onions which are the long day onion,” says Jared Gutierrez of Columbia Basin Onion LLC.

Compared to last year, there is some regional variation on onion production right now. “There’s a little bit of reduction in acreage in the Northwest but most areas stayed relatively the same,” says Gutierrez. “We’re the same in acreage but will gain a bit more in yield because we’re not fighting the heat wave like we did last year. The heat units have been lighter this year so our region is probably seven days off pace.” In all, an average crop size is predicted for the season following the cooler wet spring in the Northwest which gave onions a slow start. 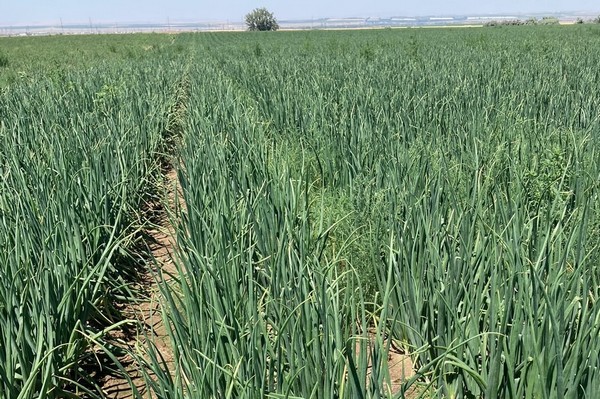 Summer onions in the field.

Demand is steady on the onions that are available right now. “We’re one of the earlier ones to start off in the Northwest with overwinters and there’ll be some more shippers coming on with transplants and early direct seed later this month. Other regions will also start to push to get their product out of the way, though I don’t think it’s as dramatic this year as it has been in the past,” he says.

Touting the onion’s benefits
Also, to help boost demand and following last year’s recall warning over onions that were possibly linked to a salmonella outbreak, Gutierrez says the industry is looking to reshape the onion’s image in the public eye and is working on promoting the nutritional benefits of onions. Gutierrez, who is 1st Vice President of the National Onion Association, also notes that the industry has worked on revamping food safety guidelines with the International Fresh Produce Association.

For now, onion pricing should stay strong going forward. Though those strong prices are helping offset the increased costs of farming, labor and fuel prices though Gutierrez says it is trying to find ways to save where it can. “To try to help offset that, we’re trying to use rail or intermodal because we can put almost the equivalent of three truckloads inside of one railcar,” he says. “Even though rail can help on transportation costs, it’s a little challenging because onions need plenty of air and good temperature when they’re being shipped. That still leaves truck transportation as the preferred way to ship. It’s just at higher costs.”