"The lower supply of strawberries is causing prices to remain stable"

The strawberry campaign in the Spanish province of Huelva is reaching its production peak with lower volumes compared to last year.

"We still have lower production levels than last season, about 15-20% less, due to the high number of cloudy and rainy days this year. The lower supply is also partly causing prices to remain stable," says Carlos Masiá, marketing manager of Masiá Ciscar. "Except for the fruit that we have had to discard during the days after the rains, the quality is good, and we have achieved good yields with our varieties Leire and Palmeritas." 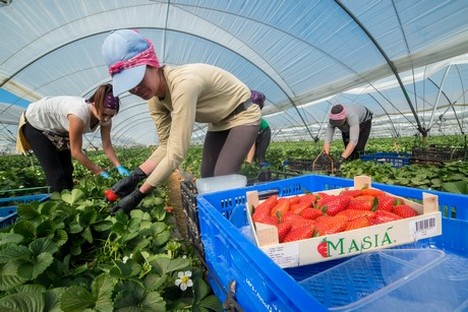 "The demand continues to be good, and we expect it to remain so at least for the next two weeks, after which there will begin to be more significant volumes of local productions in the countries of central and northern Europe," says Carlos Masiá.

This is the first season that the Huelva-based company has produced and marketed white strawberries, causing quite a sensation in the production sector and in the market. "We don't have exact figures yet, but we can say that it has been very revolutionary for our customers. We haven't needed to make much of an effort to sell this product. It cannot be compared to red strawberries in terms of consumption, but it is a delicate product that is presented as a premium alternative in the berry range," says Masiá Ciscar's marketing manager. 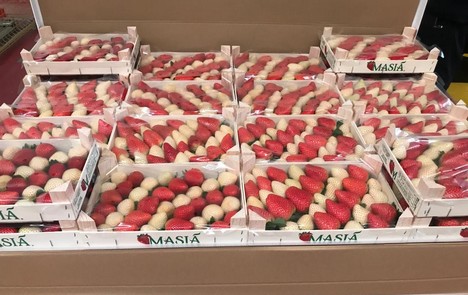 At the moment, the second part of the raspberry campaign is also starting. The area devoted to this fruit in Huelva has been reduced compared to the previous campaign due to the strong competition from other countries, such as Morocco or Portugal. "In these countries, the production continues to grow, especially in Morocco, which has the advantage of its much lower labor costs," says Carlos. "However, we hope that prices will remain at good levels in the second part of the season."

Regarding blueberries, Carlos Masiá says that: "It has been a difficult campaign because the rainy weather has caused the overlapping of varieties, causing the supply to accumulate and prices to collapse." However, he also reports that the blackberry harvest is starting with good production and quality levels.

According to Carlos, the rise in production costs has been very noticeable in the marketing of berries. "The increase in the price of materials for packaging has not been as much of a concern as their supply. This was already a year with less production, but if we don't have anything to pack it with, we'll have even less. For this reason, this year, we have made a great effort to ensure that there are enough packaging materials available from the beginning of the campaign, as a precaution and in order not to interrupt our supply."