'The plum assortment was broad, although availability was somewhat limited'

Local plum offerings formed the basis of the range, above all Hauszwetschge, Top and Ortenauer. The presence of Cacak's Fruchtbare was obviously limited, while the importance of Presenta grew.

Stanley from Eastern Europe played an important role, with these items appearing primarily in Berlin. Italian and Spanish deliveries appeared only sporadically. The assortment was wide-ranging, although overall availability was somewhat limited. Demand was generally met without difficulty. Nevertheless, individual stores reported rising prices, as accommodation had improved noticeably. Volume-induced, however, some traders had to accept concessions if they did not want inventories to grow further. Fruit of lower quality was particularly affected by the discounts. 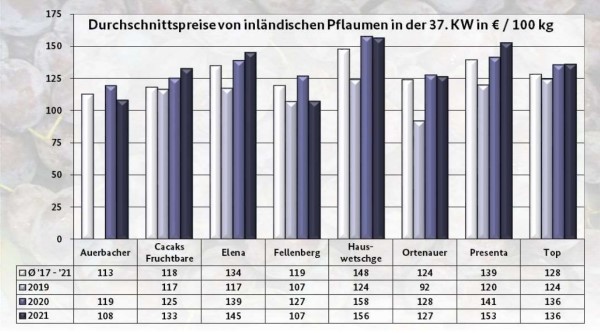 Pears
Santa Maria and Williams Christ were the main pears supplied from Italy. In general, demand was satisfied without any problems. Prices did not follow a clear line.

Table grapes
Italian batches set the tone. Demand had definitely increased, but could often be satisfied with ease. If the organoleptic characteristics were convincing, traders were able to confirm their previous prices.

Bananas
Demand intensified. The supply of ripened bananas was sufficiently adjusted to the demand. Consequently, prices generally remained at the level of week 36.

Cauliflower
Domestic supplies prevailed and were in stock at all markets. The quality of German products was mostly convincing. Prices trended downward rather than upward.

Lettuce
Lettuce came from Belgium and domestically. Demand was not particularly strong and was met without difficulty. The prices sank in the majority, at the latest towards the weekend.

Cucumbers
Sales of the dominant domestic and complementary Dutch and Belgian offerings were very mixed. Almost every market reported daily price fluctuations in both directions.

Tomatoes
A diverse assortment was available, with Dutch and Belgian lots obviously setting the tone. Supplies from Poland, Croatia and Morocco only completed the business, but certainly gave the competition a hard time thanks to their low prices.

Sweet peppers
Dutch deliveries dominated ahead of Belgian ones. Prices showed no clear line, fluctuating almost daily. In the end, higher prices were recorded than in the previous week.