"There seems to be a lack of understanding in the trade just now, everyone has problems"

Taiwan had been relatively unaffected by Covid until 15th of May this year when they went into a level 3 lock down and businesses had to shut down, they are now in level 2 and have the first 0 case day on the 25th August.

As with other countries demand for fresh produces didn't drop but was bought from different places. The restaurants did more take-aways and people bought more from retailers.

"People in Taiwan are used to eating out and the restaurants switched very quickly to using food delivery apps and the supermarkets upped their capacity for home deliveries. The change to being in lock down was initially difficult after a year and half of living as normal while other countries suffered from lock downs, but businesses here have done a good job,” explained Andrew Grantham from Kingfisher Fresh International, based in Taiwan. 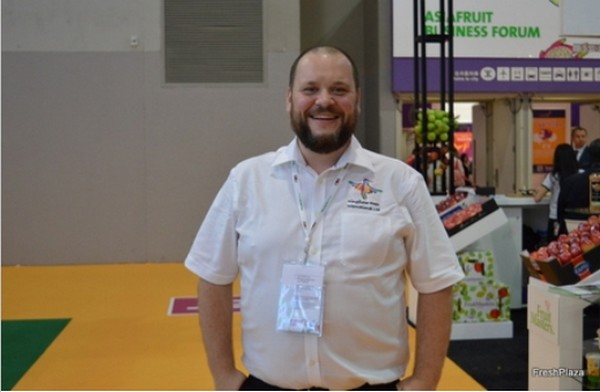 The ports functioned well, there was a bit of a slowdown as staffing numbers were reduced when people got sick, but the biggest problem with importing fruit and vegetables has been the shipping delays.”

There are significant delays on vessels from the US and China which are dominant exporters to Taiwan, supply from New Zealand and Australia has also been affected.”

Demand has remained high for fruit and vegetables.

The big issue here is the shortage of labour as people have been forced to stay at home, this has severely affected deliveries to the markets and especially to retailers.

"Some of our customers throughout Asia are working on 60% staffing levels this has been imposed by the government and is being strictly enforced. People tend to live with extended family in one house so they are afraid of catching the virus and infecting others in the household.

"Receivers have had problems getting product to customers, but also due to the shipping delays more people are needed to asses quality and repack fruit on arrival. There is a push by companies to have their staff vaccinated and many are assisting workers financially to get the vaccine to ensure they have the required workforce."

The wet (day) markets have been limited due the lock downs and people have been afraid to go back for risk of infection. The retailers have been compensating for this by offering family packs of fruit. Confidence is now increasing and restaurants are opening again albeit with restrictions in capacity.

"For our business we have seen less demand from certain markets. The riots in South Africa have affected the citrus supply and we are seeing delays. We would normally work a few days in advance now we are having plan two weeks ahead. The problem is that customers don't want to order so far in advance as they're dubious about quality and extended arrival times.

"Shipping is the biggest headache, we have no idea when vessels will arrive, we can have nothing for weeks then four will arrive together. This causes huge problems with unloading, storage, quality control and repacking.

"People are getting very frustrated as the shipping companies say it is out of their hands and its not the suppliers fault if there are delays resulting in quality issues on arrival but at the same time its not the receivers fault either. There seems to be a lack of understanding in the trade just now, everyone has problems. The shippers are certainly lacking in service to customers, but they also have problems.”