Harm Valckx: "It took all we had to prevent a dike breach"

The waters are now subsiding in parts of the Netherlands. And as the days pass, the excessive rainfall and high water levels' impact is becoming ever-clearer. Eric Huids chairs the Dutch Fruit Growers Association (NFO) Limburg branch.

He's noted damage to sweet and sour cherry, redcurrant, and ripe plum crops. According to the NFO, uncovered crops seem to be largely lost. That's due to mildew and cracking. But high root pressure has affected covered crops too. 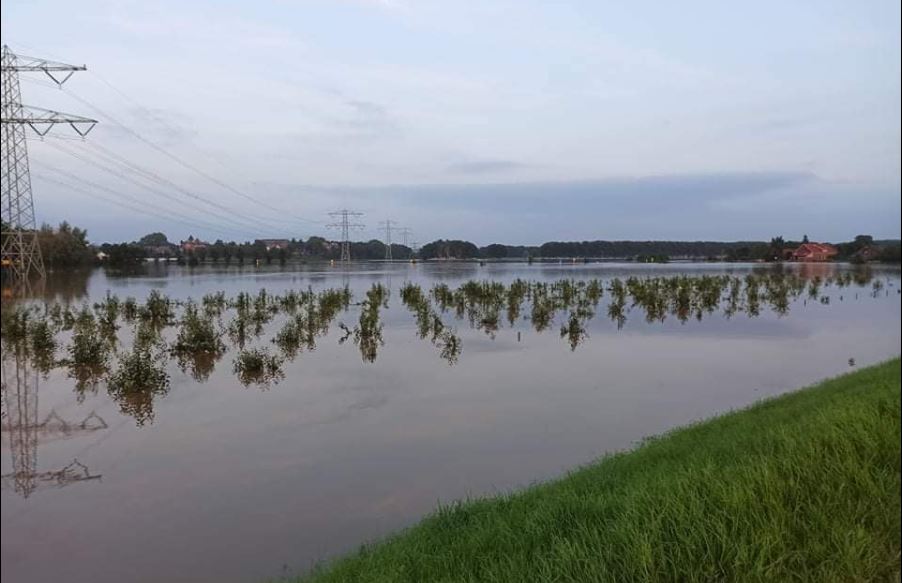 The plants' flood damage isn't clear yet. In the south of Limburg, there are hardly any orchards close to the Maas river. But there are some further north. And plots along the Roer river have also been flooded. "It remains to be seen what the submerged plants will do," says Huids.

He advises growers to map out the situation as well as possible. Then, if there's any follow-up damage - say, tree failures or excessive cankers - they'll have sufficient evidence at hand. For now, it isn't yet clear how insurers and the government will deal with subsequent damage.

The NFO and Limburg Agricultural and Horticultural Association (LLTB) have approached their members in the affected areas. These farmers must register their damage. That's partly because Limburg has been declared a disaster area.

Water, starlings decimating blueberries
It's a difficult start to the harvest for many blueberry growers. Last week's heavy rain is causing quality problems. Starlings are also claiming their share of the berries from the bushes. Blueberry grower Harm Valckx's farm narrowly escaped the damage.

"We trucked in hundreds of loads of sand. We placed big bags of these along the Maas. Many volunteers worked tirelessly to prevent the dikes from bursting. That includes those from the village associations. It was a really close call; a matter of a few centimeters. But fortunately, we succeeded," he says.

Harm's bushes might not have been submerged, but the torrential rain did considerable damage. Not only to his farm but also to other blueberry growers, he says. The heavy rain has caused the berries to soften and crack quickly. "Some of the fruit is even still cracking in the crate. That's the hardest part."

"You can't already sort out all the bad fruit at harvest. They're not visible during sorting either." Harm expects to have harvested the Duke variety by the end of this week. That accounts for a third of his farm's production. He's less concerned about the later varieties.

Starlings are another huge issue. That's true for all Dutch blueberry growers. "They're a massive problem. We have two flocks of about 5,000 starlings. And you can't do anything about them except clap your hands. Or put up a noise-maker. When they fly away, they simply settle again a little way off," says Valckx.

Top fruit orchards under water
A few top fruit orchards along the Mass river have been flooded. Like those on the Görtz family fruit farm in the town of Baarlo. After being evacuated, they were allowed back into the area on Saturday evening. The buildings are undamaged. But the deluge of rain has severely damaged their cherries. That's what the family writes on Facebook.

Their pear and apple orchards have been under water for several days too. It's still uncertain how that will eventually turn out. But, for now, it's clearing up time. All the river debris has stripped the apple trees bare. The Görtz family is still asking for volunteers via Facebook.