Mart Boender grew up on his father's farm. He has, therefore, been passionate about vegetable cultivation from an early age. His father does greenhouse cultivation. But, in 2014, Mart decided to start growing various lettuce varieties outdoors. He cultivates Lollo Bionda, Lollo Rossa, and red and green oak leaf lettuce. He now farms these on some ten hectares in the Netherlands.

"Our ratio is about 45% Lollo Bionda, 35% Lollo Rossa, 15% red oak leaf, and five percent green oak leaf lettuce," says Mart. He, and his wife, Janske, run the business. The grower often harvests his first lettuce around May 5. And the season continues until the end of October. In the winter, Mart helps his father cultivate vegetables like butter lettuce and Chinese cabbage in a greenhouse. 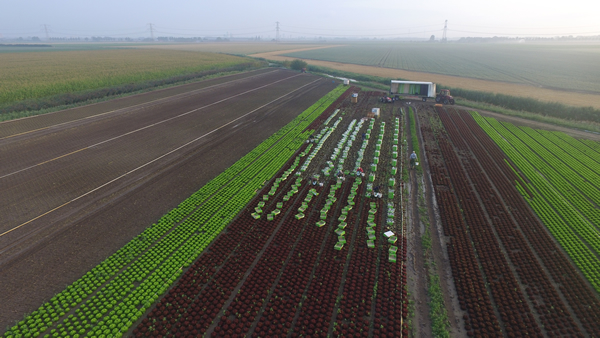 Mart does his own marketing. He sells more than 90% of his produce to Dutch wholesaler, Levarht. "A very loyal customer with clients all over the world. But they also have to deal with the market situation. So we don't turn away other buyers." Pre-pandemic, Boender's lettuce sales were steadily increasing. But when the COVID-19 measures were introduced, sales immediately fell sharply. "It was quite a struggle with air freight. Many of our end customers work with the hospitality sector. So the lockdown hit us hard."

Sales have picked up nicely in recent weeks. "The trade sector is still a little cautious. People don't want large supplies. That's not the idea I get. We're behind schedule." Fusarium is plaguing many a greenhouse farmers' crops. That's not an issue for Mart. "It may be because we do a lot of crop rotation. I have, fortunately, not seen any Fusarium in our fields yet."

When asked about the biggest challenges, the grower says it's mainly that of labor. "We now have three permanent employees. But in the autumn, we can easily have seven. Retaining people will be quite a task in the future." He mentions the Dutch government's policy on game hunting as another challenge. "Cabinet members seem to be very concerned about rabbits and pigeons. I want to invite them here to count the rabbits. They'll see large strips of lettuce sprouts being eaten by birds and bunnies. I hope they'll then change their stance," Mart concludes.